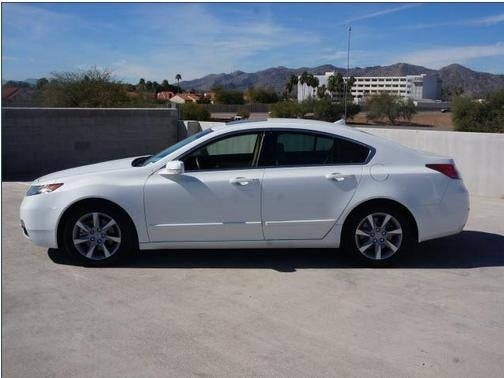 Average user score
4 ⁄ 5 stars
Based on 8 reviews
Best In Class Luxury Sports Sedan - Great Awd! by TomGunn — Like the appearance and styling, interior and performance, handling of this vehicle. Always been an Acura fan. The Navigation, tech package and voice activation and integration with other technology ... Read more
Excellent Family Car by Wadech — Very roomy cabin and cargo. Actually it looks like a BIG car even tho its rated mid-sized car. Navigation, bluetooth phone compatibility with voice controls and back camera for parking etc are very us... Read more

In 2009, when Acura introduced the TL, people were quite frankly aghast. The “dramatic” front end, with its Joker-like smile, sent critics into a tizzy. So much so that the midsize sedan had its first extensive redesign for 2012. Therefore, for the 2013 model year, Acura's leaving the TL essentially untouched (either the critics are satiated, or the designers are exhausted).

The TL is available basically in 2 trim levels, the Base TLs, which contain a 3.5-liter 24-valve V6 engine producing 280 hp and 254 lb-ft of torque. It's mated to a 6-speed automatic transmission with paddle shifters. Then there’s the TL SH-AWDs, which are tuned for sport and use a 3.7-liter 24-valve V6 making 305 hp and 273 lb-ft with, of course, AWD. It can be paired with either the automatic or a 6-speed manual transmission. The Base TLs are equipped with 17-inch wheels, with an option for 18; the TL SH-AWDs start with 18-inchers and offers 19-inchers.

Standard features for the TL include USB, an 8-speaker sound system, fog lights, moonroof, Bluetooth and heated front seats. Packages include the Advanced Package (ventilated front seats and a blind-spot monitor) and a robust Technology Package, including 10-speaker Surround Sound, a navigation system and GPS temperature control, which automatically adjusts according to the position of the sun.

But did the company do a good job with the redesign? True, its front end is a little more demure, but some think the metallic badge is still too flashy. Overall, it’s curvy and not too outré. Inside it still needs some work, as there are complaints of a lack of headroom and knee and foot space in the rear and a cluttered interior. The trunk is also very small, with only 13.1 cubic feet of space.

The car can be fun to drive, however, especially the TL-SH AWDs with the manual. Some feel the main selling point of the car is its close-ratio gear shift, which helps to offer a smooth ride that rivals cars twice its price. And, fully loaded, the Acura features a host of impressive technology.

In 2013, the IIHS awarded the TL as a Top Safety Pick, and it includes such features as antilock brakes, stability control and 6 standard airbags.

But the TL can get pricey. Consumers have to decide if plunking down for a fully loaded TL is worth it, when perhaps a more prestigious German car is also within reach.

Users ranked 2013 Acura TL against other cars which they drove/owned. Each ranking was based on 9 categories. Here is the summary of top rankings.

I have a 2013 Acura TL in for some warranty service to change out piston rings. The dealer asked if I wanted to change out the timing belt for $1,000 while they have the engine open. They say the ...

When To Change A Timing Belt

I replaced the power steering wheel modular in an 2013 Acura TL & now my "door locking cycles every time I stop." The modular works and was NOT programmed. Thanks Dottie B