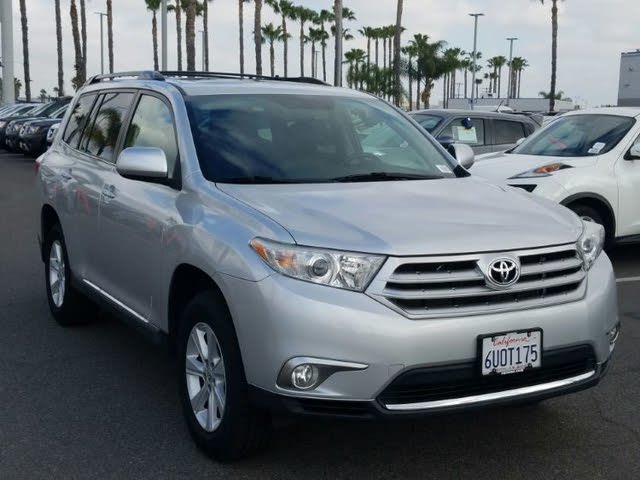 Oafish acceleration from the 4-cylinder engine, underwhelming handling, a cramped third row and downright dowdy styling keep the 2012 Highlander midsize crossover solidly in the middle of a fiercely competitive pack.

Though not without its faults, the 2012 Toyota Highlander lineup offers the young family a competent and utilitarian, if not overly exciting, crossover ute. Look for better-than-average acceleration from V6-equipped trims, while the available all-wheel drive makes winter driving a whole lot more bearable. Add all this to a plethora of standard features, and this practical people-hauler offers some serious bang for the buck.

Those in need of a practical, family-oriented midsize crossover could do worse than the 2012 Toyota Highlander. Overlook the somewhat bland exterior, precious little storage behind the third row, some harsh plastic interior fixtures and a tepid 4-cylinder powerplant, and you’ll see this comfy, 7-passenger ute begin to prove its mettle right off the dealer’s lot. Three rows of seating, over 95 cubic feet of cargo space with the rear seats folded, and a goodly, if not exactly generous number of standard cabin amenities, should fit right in with family vacations, mall-hopping and the workday commute.

Though it offers practical, affordable transportation and a bit more refinement than its RAV4 cousin, the 2012 Highlander isn’t without a few peccadilloes. The third row is comfortable only for children, and without much cargo room (only 10 cubic feet) aft of it, the second-row seats don’t fold quite flat, thus eating into cargo area, and handling is ponderous, at best.

In any case, now entering the fifth year of its second generation and unchanged from 2011, this latest Highlander sports three trims, the base Highlander, the midlevel SE and the top-shelf Limited. All three trims, though delivered with standard front-wheel drive (FWD), are eligible for available all-wheel drive (AWD), as well as a peppy and vaguely efficient V6 powerplant.

Disputably the most popular of Toyota’s three midsize sport ute offerings, the Highlander must also contend with the likes of GM’s portlier Chevy Traverse, Buick Enclave and GMC Acadia, not to mention Dodge’s potent Durango and Ford’s well-wrought Flex and Explorer pairing. Additionally, Mazda’s agile CX-9 is considered a kick to drive, while the capable Kia Sorento offers less cabin room and a row less seating than the Highlander, but comes at an admirably lower initial cost. 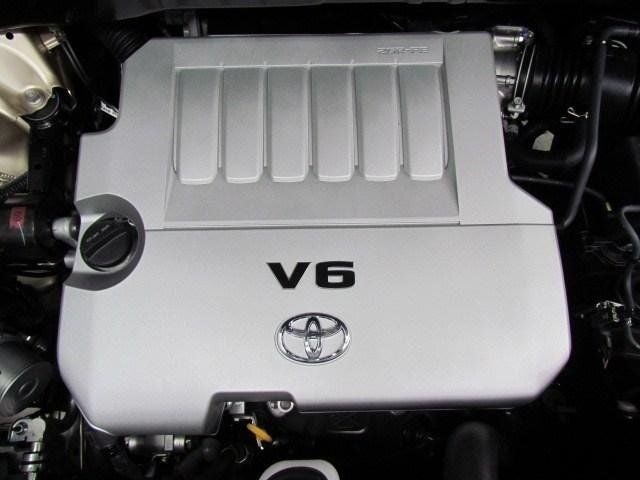 In keeping with class tradition, standard power for the FWD Highlander base and SE trims is a 2.7-liter inline 4-cylinder (I4) engine that’ll put out 187 hp at 5,800 rpm. A slick 6-speed shiftable automatic transmission mates with the four-banger for 186 lb-ft of torque at 4,100 rpm. That’s enough grunt to tow up to 3,500 pounds of trailer when carrying the available 4-cylinder Towing Prep Package with its heavy-duty engine cooling and amped-up alternator. Variable valve timing (VVT), meanwhile, keeps mileage at an estimated 20 mpg city/25 highway.

For those with a penchant for a peppier people-hauler, a VVT 3.5-liter V6 powerplant comes standard with the Highlander Limited and the AWD base and SE trims, while remaining available for FWD base and SE editions, as well. The standard 5-speed shiftable automatic transmission ensures 270 hp at 6,200 rpm and 248 lb-ft of torque at 4,700 rpm, while the available V6 towing package allows these hopped-up Highlanders to tote a maximum of 5,000 pounds of trailer. Finally, mileage in FWD variations is estimated at 18/24, while AWD trims are estimated at 17/22.

In keeping with tradition, the Highlander’s full-time AWD system is managed by a center-mounted mechanical limited-slip differential, while the 5-speed automatic boasts standard descent control.

Virtually all reviewers agree the I4 engine is good on gas. Opinion seems split, however, over its appropriateness in this hefty (it has a 4,000-pound curb weight) ute. Claims that the four-banger is perfectly adequate to its tasks are countered by declarations that it presents a challenge when merging and passing on the highway. The majority of reviewers do concur that the I4 is perfectly suited for around town, with the 6-speed automatic transmission performing almost flawlessly. The V6, on the other hand, is noted by the vast majority of reviewers to be potent and responsive, with one test claiming a class-topping 0-60 time of 7.5 seconds. The 5-speed automatic transmission that accompanies the six-banger is also lauded by reviewers as smooth and quick, while most agree that the V6 emits a sweet purr on acceleration, as opposed to the four-banger’s raucous and much less refined cacophony.

For a mid-priced crossover, the 2012 Highlander offers a surprisingly compliant ride, according to a majority of reviews. Its 4-wheel independent suspension, bolstered by MacPherson front and rear struts as well as stabilizer bars fore and aft, smoothes smaller humps and gullies with ease, though rougher surfaces will certainly be noticed. Almost all reviewers agree that the Highlander’s ride is among the best in its class. Several reviewers do point out that the 17-inch alloy wheels on the base and SE versions are a tad more forgiving on less-than-perfect pavement than the Limited’s 19-inch wheels and tires.

Despite traditional unibody construction, Toyota’s midsize ute provides only so-so handling, with most reviewers arguing that the electric power steering is a bit too cushy for cruising the highway comfortably. Significant corner lean and a lazy feel to the wheel will, according to most reviewers, keep drivers well aware that they’re not driving a sports sedan. In traffic, however, this placid steering response comes in mighty handy, while crowded parking lots are no trouble at all with the Highlander's surprisingly compact turning radius, according to a majority of reviews.

Finally, most reviewers describe this hefty crossover’s brakes as powerful and true, with no significant pedal glitches.

For most people, the 2012 Highlander presents more than its share of appearance and cabin amenities. The base Highlander, for instance, offers a standard rear spoiler along with cloth upholstery, front bucket seats and reclining second-row seats with a center armrest. Those second-row seats, incidentally, are admirably adaptable to a number of configurations, as well as containing a useful storage compartment cleverly hidden beneath its center section. Remote power door locks also come standard, as do power windows and outside mirrors, cruise control and telescoping tilt-wheel steering. A pleasant surprise is the standard front and rear air conditioning with separate controls, while a simulated alloy steering wheel provides a bit of class to an otherwise undistinguished interior. Finally, a standard single-CD player with 6 speakers and auxiliary MP3 input provides tunes and talk.

Of course, lower trims are eligible for a number of added features that come standard on the more upscale trims, but where the Highlander is purchased has much to do with what’s available. The optional towing prep package offers a trailer hitch and wiring, as well as heavy-duty engine cooling and a beefed-up alternator for both the I4 and V6-equipped trims. All trims also can be delivered with remote engine start, keyless ignition, BLU Logic audio-interfaced hands-free communications, rear-seat DVD entertainment, upgraded JBL audio equipment and step running boards.

The SE and Limited can be further enhanced with a touchscreen voice-activated DVD navigation system, a 440-watt JBL premium audio system with 4- and 6-CD changers, 9 speakers and Bluetooth music streaming.

Though most reviews note the Highlander’s cabin to be somewhat classier than most, it remains in keeping with the vehicle's affordable nature. Roominess is a staple in Toyota’s popular midsize SUV, with ample leg- and headroom in the front and second-row seats. All reviews agree, however, that the third-row bench seat is fit only for small children, while the split-folding second-row seatbacks are notorious for ending up not quite flat, thus eating into available cargo space. Gauges and controls, on the other hand, are legible and well-placed, according to most reviews, while visibility, adequate to the front and sides, is compromised somewhat by the rear headrests and thick rear roof pillars that can make for challenging sightlines aft.

After its brush with infamy some years ago, Toyota has bent over backwards to ensure safe and dependable vehicles. The 2012 Highlander lineup reflects this commitment with a Top Safety Pick for 2012 from the Insurance Institute for Highway Safety (IIHS).

The SE and Limited, furthermore, are equipped with standard front fog/driving lights and a remote antitheft alarm, while all trims are eligible for the available V.I.P. security system and glass breakage sensors.

In gaining the IIHS safety accolade, the Highlander was awarded the Institute’s best score of Good in front and side impact testing, as well as roof strength tests and rear impact testing. Meantime, the National Highway Traffic Safety Administration (NHTSA) gives the 2012 Highlander lineup its second-best score of 4 stars overall, with 4 stars awarded for front impact and rollover testing and the Administration's best 5-star score given for side-impact absorption.

Though by and large satisfied with their choice of the 2012 Highlander, owners do point out some inconsistencies with this practical crossover. That lack of cargo space behind the third row ranks as a small annoyance, while an overabundance of hard plastics gives the cabin a somewhat low-budget appearance, according to some. A number of owners consider exterior styling to be losing its edge, while others, contradicting many in the media, consider interior storage meager, at best. The tepid I4 powerplant, of course, comes in for its share of disparagement, though no complaints are voiced concerning its proven fuel efficiency. However, a number of owners do find this midsize ute’s cushy suspension and over-friendly steering a bit too tame for a truly fun drive.

On a more positive note, the V6 engine is embraced by most owners as potent, efficient and admirably suited to this practical people-hauler’s purpose. Of course, Toyota’s legendary reliability, as well as its traditional resale value, garners numerous owner kudos for this useful ute, while its over-the-top safety features come in for a hefty share of attaboys. Finally, the Highlander’s compliant ride, complemented by a quiet, feature-laden and roomy cabin, all draw their share of praise from owners.

What's your take on the 2012 Toyota Highlander?

Have you driven a 2012 Toyota Highlander?
Rank This Car

The front passenger door on my Highlander 2012 is stuck in the locked (and closed) position. Nothing I do is successful in getting it open (key fob, unlock switch, inside open handle, etc.). Int...

My inner light was left on for 4days and this made the battery go completely dead. Fob was also dead. Opened the door manually. Tried starting but all lights were dead. We tried doing a jump start...

223 views with 1 answer (last answer about a year ago)

Passenger Side A/C Not Blowing Cold

Passenger side A/C blows only warm air-driver's side is fine. Could it possibly be electrical/fuse related

63 views with 1 answer (last answer about a year ago)