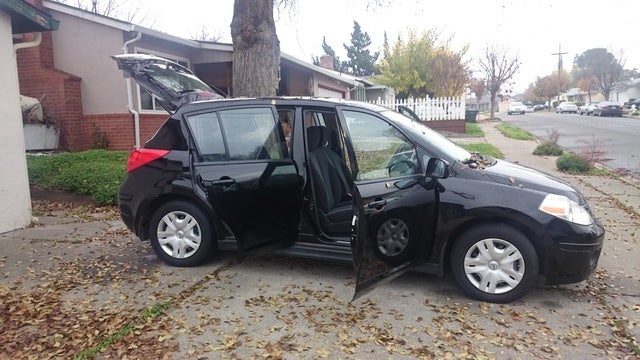 Nissan introduces an all-new Versa sedan for 2012, with updated exterior styling, a more fuel-efficient powerplant, expansive trunk space and more rear-seat legroom than any other vehicle in the subcompact class.

The 2012 Versa Hatchback retains the first-generation's dated styling and powerplant (although a new hatchback is due in 2013), and some owners says the quality of the Versa's interior components, including the cloth upholstery, remains inferior.

Although the Nissan Versa, and particularly the Hatchback, continues to outsell its competitors in the subcompact automotive class, some observers feel there are more affordable and better-equipped options in the class, including the Honda Fit, Ford Fiesta and Hyundai Elantra. Therefore, prospective buyers will be doing themselves a favor by looking carefully at a wide range of competitive vehicles before opting for the Versa. On the plus side, with a new Versa Hatchback due in 2013, Nissan might be offering great deals on the 2012 version, which could improve the Versa's overall value.

For 2012, the Nissan Versa continues to come in 4-door sedan and 5-door Hatchback versions, and starting with the new 2012 Versa sedan, Nissan launches a 2-year redo of its entry-level subcompact, which currently leads its automotive segment in sales. The automaker will follow in 2013 with a redesign of the Versa Hatchback, but for '12, the Hatchback retains the first-generation design. While few details of the Hatchback's redesign have been released, the automaker has said that it will draw on the design of the Nissan Note, an international subcompact vehicle sold in Asia and Europe. For 2012, then, Versa buyers have a choice of a new sedan or the same-old Hatchback.

The new Versa Sedan, available at 1.6 S, 1.6 SV, and 1.6 SL trim levels, retains the old 102.4-inch wheelbase, but sits 1.2 inches lower and measures 0.6 inches shorter than the previous generation. A new, lighter and more compact engine and transmission provides better overall balance and allowed the automaker to shift the body on the frame. As a result, Nissan was able to push the sedan's rear overhang outward by 2.7 inches, maximizing trunk space, which now measures 14.8 cubic feet. Although interior space decreases slightly, the Versa sedan still manages to offer class-leading rear-seat legroom and plenty of head and shoulder room in both the first and second rows.

Outside, the Versa sedan displays a more fluid shape and receives Nissan's new signature V-shaped black grille, as well as jewel-like headlights and available foglights out front. Wide shoulders and a tall, sloping roof lead to a large trunk designed to easily accommodate cargo. The new aerodynamic shape results in a low coefficient of drag of just 0.31. Inside, the Versa Sedan provides all the expected standard features, as well as such upscale options as a navigation system with a 5-inch touchscreen display.

The Versa Hatchback, available in 1.8 S and 1.8 SL trims levels, retains its original design and powerplant, but receives some new standard equipment and a few new options packages for 2012. 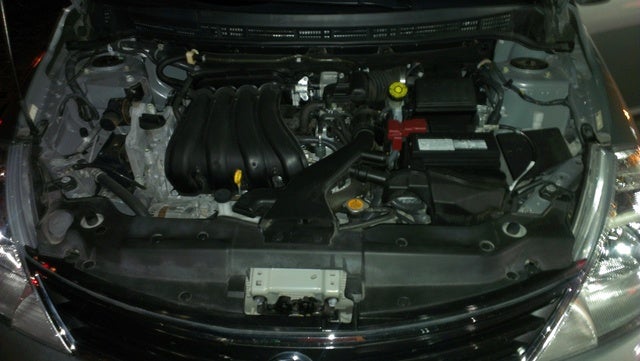 For power, the Versa Sedan receives a new 1.6-liter HR16DE 4-cylinder engine. To improve the engine's performance and efficiency, Nissan used such cutting-edge technologies as dual injectors for each cylinder and a twin Continuously Variable Timing Control (CVTC) system, based on a similar setup used in the Maxima. The engine produces 109 hp and 107 lb-ft of torque, and links to 5-speed manual transmission in the 1.6 S trim or an Xtronic CVT (continuously variable transmission) in the 1.6 SV and 1.6 SL trims (optional in the 1.6 S). The CVT has a broad transmission ratio, comparable to a 7-speed automatic transmission, which helps deliver smooth acceleration and good responsiveness, according to Nissan.

Around town and during daily driving, the small 4-cylinder delivers good performance, but it can struggle at times under heavy acceleration or when passing at highway speeds. However, testers note that the engine and transmission are fairly quiet during typical operation. Fuel economy numbers for the engine check in at a respectable 30/38 mpg with the CVT and 27/36 with the manual shifter. The Versa Sedan is the first vehicle from Nissan to receive the PUREDRIVE designation, awarded to vehicles that promote eco-friendly driving and lower CO2 emissions.

The Versa Hatchback retains its larger 1.8-liter engine, which generates 122 hp and 127 lb-ft of torque. The engine links to a 6-speed manual transmission in the 1.8 S trim, although owners can opt for a 4-speed automatic. The CVT comes standard in the 1.8 SL Hatchback trim. Fuel economy numbers range from 26/31 for the 6-speed manual to 24/32 with the 4-speed automatic and 28/34 with the CVT.

The 2012 Versa Sedan sits on the automaker's new front-wheel-drive "V" global platform, which replaces the old B platform. The new platform uses 20 percent fewer components than the previous version, and weighs in at 150 fewer pounds, according to the automaker. Both the Versa Sedan and the Hatchback feature a MacPherson independent front suspension and a torsion-beam rear suspension, with stabilizer bars in both the front and rear. The Hatchback also includes ripple-control shock absorbers. Both receive vehicle-speed-sensitive electric power steering.

Despite its new platform, the Versa sedan's ride and handling get mixed reviews from testers. Some would like to see better feedback from the steering system, although most find the steering adequate for a subcompact car and an improvement over the electric power systems in some competitive vehicles. Other testers note some body lean in corners. Although the Versa comes with drum brakes in the rear instead of disc brakes all around, most reviewers are satisfied with the Versa's braking system. Overall, owners and reviewers say they like driving the Versa, keeping in mind that it's an inexpensive, entry-level subcompact vehicle, and not a midsize or luxury sedan.

All Versa trims ride on 15-inch wheels except the Hatchback 1.8 SL, which gets 16-inch aluminum-alloy wheels for 2012. In addition, all trims receive all-season tires.

In redesigning the Versa sedan's cabin, Nissan sought to create an open, airy look and feel, and in that the automaker has succeeded. Nissan calls the new Versa sedan a "big little car," and notes that it has class-leading legroom in both rows, easily accommodating 5 adult passengers. In fact, the Versa sedan has more second-row legroom than such midsize luxury cars as the Lexus LS 460, the BMW 5 Series and the Mercedes-Benz E-Class, according to the automaker.

Nissan also notes that it upgraded the Versa sedan's cloth upholstery and interior materials, although some reviewers say the cabin still displays too much plastic and inferior-grade materials. However, they add, the Versa's cabin is appropriate for its subcompact class.

In addition, Nissan offers several new options packages for the Versa Hatchback for 2012, all available on the base 1.8 S trim. A Plus Package adds remote keyless entry and cruise control with steering-wheel-mounted controls, while a Convenience Package also adds Bluetooth, a leather-wrapped steering wheel and a premium audio system with speed-sensitive volume control. In addition, a Special Edition Package includes all the optional features plus unique 15-inch aluminum-alloy wheels. Other options for both the Versa sedan and Hatchback include SiriusXM satellite radio and a Nissan navigation system with a 5-inch color touchscreen.

As a daily commuter and basic transportation, the Versa gets decent overall marks from owners, who like the vehicle's value and functionality. The roomy cabin and rear-seat legroom, for instance, are particularly appreciated by owners, and the Versa delivers good gas mileage, with some owners reporting their vehicles achieve over 40 mpg at highway speeds.

The Versa travels fairly smoothly over pavement, owners say, and interior ergonomics are generally good, though some owners complain about the quality of the Versa's cloth upholstery and interior materials. In addition, the Versa's CVT gets mixed reviews. Some owners like its smooth shifting, but others have difficulty getting used to the CVT's operation, and some note a droning sound from the transmission. A number of owners also like the manual shifter. Overall, owners find the Versa fun to drive for a subcompact car, and like its value, practicality and "big little car" nature.

Users ranked 2012 Nissan Versa against other cars which they drove/owned. Each ranking was based on 9 categories. Here is the summary of top rankings.

Have you driven a 2012 Nissan Versa?
Rank This Car

What Causes Wet Floor In A Car?

Hello ! I have a 3 year old Nissan Versa with only 35.000 miles on it, just recently after the rain the floor getting wet .My dealer could not found anything , even water leak specialist check it a...

I have a 2012 Nissan versa that's underwater, my credit is fair. I need to trade in the nissan for 2 cars. Can I do that on car gurus?

We had the Auto Zone check the code & it shows miss firing & when you crank it ,it will idle ok but when you put it in gear it goes dead, need to know how to reset the timing.

I have a 2012 Nissan Versa that has run like a dream until now (85K miles). When I push on the accelerator, the car moves, but very slowly. When I floor the accelerator - same thing, the car accel...