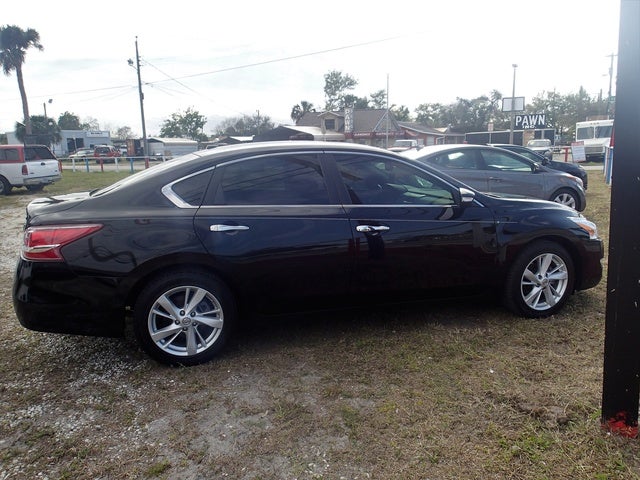 From its standard 4-cylinder fuel efficiency to available V6 acceleration, the comfortable ride to the responsive continuously variable transmission (CVT), quality cabins to the top-end trim’s sport-tuned suspension, the 2012 Nissan Altima remains a value-laden choice in the midsize sedan segment.

A dearth of rear-seat room and some unimaginative cabin trappings, as well as frustrating and rigid options offerings and some noticeable engine racket on hard acceleration, bring the 4-door Altima down a peg or two.

Though due for a thorough redesign next year, the Nissan Altima in its 2012 edition carries enough of a reputation to be well worth a tire kick or two. Good looking, peppy and with enough ride comfort and handling aplomb to satisfy the most demanding daily commuter or mall crawler, this classy midsize 4-door continues to impress both reviewers and owners alike.

Long on reliability, practicality, pizzazz and value, the Nissan Altima Sedan maintains this admirable reputation for 2012. In anticipation of a lineup-wide redesign for 2013, this year’s edition sees few changes, with a few tweaks to features and the deletion of the Hybrid trim being the most obvious.

This perennially popular 5-passenger family-oriented midsize sedan traditionally sports quality cabin materials and features, however these are lessened somewhat by a somewhat bland interior design and a cramped rear seat, according to a number of reviews, and the not-so-user-friendly options offerings leave much to be desired, value-wise. The miserly inline 4-cylinder (I4) powerplant or the peppy V6 engine, not to mention the well-wrought continuously variable transmission (CVT) that’s standard throughout the lineup, ought to go a long ways toward mitigating these shortcomings Then there’s the Altima’s sensuous profile and surprising agility, things not often found in the ordinary commuter car or mall-hopping 4-door. Ride comfort doesn’t take a back seat to the nimble feel, either. Finally, trunk room is a cavernous (for the class) 15.3 cubic feet with plenty of maneuvering room at the opening for even the most awkward loads.

Three trims, the base 2.5, midlevel 2.5 S and the flagship 3.5 SR constitute the starting lineup in the 2012 edition of the Altima. The Hybrid, though rumored to be available in California, Oregon and select northeast states, is nowhere to be found in reviews or on Nissan’s website. The midlevel trim can be tricked out in the 2.5 S 20th Anniversary or the 2.5 SL sub-trims with the addition of a number of available features. The 3.5 SR, with the V6, sport-tuned suspension and a few added standard goodies, is intended for the dedicated Altima enthusiast who’s willing to spend just a bit more for a more engaging drive to work or the ballgame. Of course, all trims are, and seem destined to be for the foreseeable future, offered in front-wheel-drive (FWD) configuration only.

The 2012 Altima again confronts a number of rivals in the give-no-quarter midsize sedan segment. Honda’s spacious Accord tops the list of contenders, with the chic Toyota Camry right alongside. Then there are such battlers as Ford’s competent Fusion and the comparably nimble MAZDA6. Nearly all reviewers point out that though the others have their advantages and their fan bases, they’re hard-pressed to offer the seasoned mixture of practicality and driving excitement to be found in Nissan’s snazzy sedan. 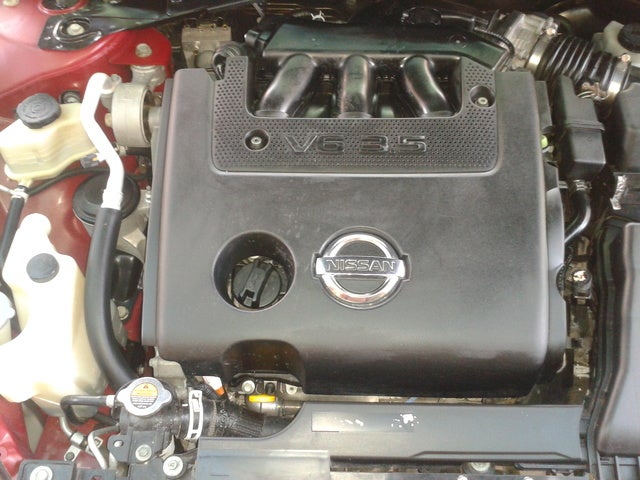 As is doubtless obvious, 2012 Altima trims receive their monikers from the size of the engine they carry. Extrapolating on that thought, look for the base 2.5 and the 2.5 S to sport a standard variable-valve-timed (VVT) 2.5-liter I4 engine managed by the much-ballyhooed CVT automatic. This pairing puts out 175 hp at 5,600 rpm and 180 hp at 3,900 rpm, all to the tune of 23 mpg city/32 highway.

Tests had an I4-equipped 2.5 S sedan going from 0-60 in a fairly rapid 8.5 seconds, while the 3.5 SR was clocked from 0 to 60 at a hair under 7 seconds. Most reviewers agree that in ordinary driving, the Altima will certainly hold its own both in town and on the highway, but concede that a few less pricy competitors can do better. The CVT, meantime, is described by most reviewers as seamless and silent…and as taking a little getting used to. This state-of-the-art transmission works well with either the I4 or the six-banger, but the V6 by far brings out its best attributes. More than a few reviewers are somewhat disappointed that, despite their better-than-adequate performance, neither engine sounds particularly refined, especially on hard acceleration. At cruising speeds, most are quick to point out, both powerplants calm down significantly.

Squatting on a 4-wheel independent suspension, the 2012 Altima lineup boasts MacPherson front struts and a multi-link rear end, as well as front and rear stabilizer bars. Both the 2.5 and the 2.5 S sport 16-inch steel wheels, while the 3.5 SR kicks with 17-inch alloy wheels. The flagship 3.5 SR also comes with a standard sport-tuned suspension.

With their small-ish tires both 2.5 trims are noted by reviewers to be pleasantly compliant ride-wise, while steering is described as surprisingly responsive. The 3.5 SR, meanwhile, is a lean, mean cornering machine, according to more than a few reviews, but, of course, the ride quality suffers a bit with this tip-top trim’s beefed-up suspension. Ordinary bumps and cracks are well-modulated in all three trims, and even bigger anomalies will, say most reviewers, seldom produce that wince of pain owners feel for their (sometimes) pampered 4-wheeled pets. All in all, each version of Nissan’s popular midsize sedan has nothing to be ashamed of, in either ride comfort or handling characteristics, with the 3.5 SR remaining the best bet for some extra kick in the commute.

Brakes in the Altima lineup are described as powerful and true by most reviewers. However, a few have noticed that the pedal can be a bit touchy at times, though this seems more a matter of opinion than of complaint.

Geared toward a family with a budget, the 2012 Altima lineup nevertheless offers some fancy digs for the discerning buyer. The base 2.5 starts with velour upholstery and split-folding rear seatbacks and adds in a rear-seat folding center armrest. Then there are remote power door locks, power windows and mirrors, cruise control, telescoping tilt-wheel steering and air conditioning, as well as a trip computer. Though this base trim is pre-wired for both a phone and 4 audio speakers, neither item is standard nor offered as an option. As a matter of fact, the only extras available to the 2.5 are floor mats, an emergency/first-aid kit and aluminum kick plates.

Moving up to the 2.5 S, on the other hand, begets a standard single-CD player and 6 installed speakers, not to mention eligibility for a number of option packages. One such is the 2.5 SL Package with upgraded wheels, leather upholstery, a universal remote garage door opener, heated front seats and an illuminated center console. The 2.5 S 20th Anniversary Package, meantime, throws in 16-inch aluminum alloy wheels, a rear spoiler, and Bluetooth hands-free communications.

A number of further option packages for both the 2.5 S and 3.5 SR include the Technology Package with 9.3GB of music storage, the Convenience and Convenience Plus packages with remote power-window operation, genuine wood cabin accents, a power moonroof and dual-zone climate control, and the Special Edition Package with rear spoiler and front fog/driving lights.

Reviewers generally find Altima cabins to be comfortable (at least in front) and quiet, reasonably well-appointed in the higher trims, and exuding quality in materials and workmanship throughout the lineup. Gauges are large and easily readable day and night, while basic controls for climate control and audio functions are logically placed and eminently reachable. A number of reviewers do suggest, however, a bit more pizzazz in cabin design, possibly to be accomplished in the up-coming next-gen freshening.

The National Highway Traffic Safety Administration (NHTSA) gives the 2012 Altima sedan its second-highest 4-star rating in overall safety, front impact testing and rollover protection, while it grants its highest award of 5 stars for side-impact protection. The Insurance Institute for Highway Safety, meanwhile, awards the Altima its highest mark of Good in frontal offset crash-worthiness and side impact testing, and its next-best rating of Acceptable in roof strength tests.

Though generally well-regarded by consumers, the 2012 Altima sedan does have some issues. Among the more common is a strange thump often heard and felt by owners when first starting to drive. Theories for this odd noise, posited by both Nissan techs and by other owners, range from the CVT adjusting to an assertive resetting of the ABS system. Some suggest that the noise is normal and nothing to worry about, while others say that it doesn’t happen in all sedans, and Nissan might want to address the problem. In any case, further gripes include lackadaisical acceleration from the I4, a feeling of heaviness in the steering, that pesky cramped rear seat, those frustrating options plans and a certain blandness in the cabin décor.

On the other hand, the majority of owners praise the I4’s fuel economy, while others laud this classy sedan’s front passenger room and plethora of standard techno-features. Acceleration from the V6 engine is a hit with owners, as is ride comfort, especially in the 2.5 and 2.5 S, and that heart-thumping agility owners get with the 3.5 SR. Exterior looks and quality interior fixtures draw kudos from many owners, as does the CVT, once drivers get used to it.

G I just bought a 2012 with about 75k on it. The price was $11k. Thought it was very reasonable for this type of vehicle. I was impressed with the 34.7 miles per gallon fuel economy with combined city and highway driving. I did the math at the pump. so those numbers are real. 233 miles 6.7 gallons. It actually got better mileage than my old 2005. I am a return customer to the Nissan, because my 2005 has 274,000 miles and I never had to put it in the shop. Great Automobile.

Loyale_2181 I BOUGHT MY 2012 NISSAN 3.5 SR IN APRIL 2015 WAS USED ONLY 16M MILES, BEEN A DRIVER FOR FIFTY YEARS, AND THIS IS THE BEST AUTO THAT I HAVE EVER OWNED, WAS ALWAYS A CADDY GUY, NOT ANY MORE..THE LOOK OF THIS ALTIMA IS SIMPLY GORGEOUS.

Loyale_2181 I BOUGHT MY 2012 NISSAN 3.5 SR IN APRIL 2015 WAS USED ONLY 16M MILES, BEEN A DRIVER FOR FIFTY YEARS, AND THIS IS THE BEST AUTO THAT I HAVE EVER OWNED, WAS ALWAYS A CADDY GUY, NOT ANY MORE..THE LOOK OF THIS ALTIMA IS SIMPLY GORGEOUS.

Ellis The key to outstanding mileage is a light touch on the throttle. Highway mileage can be consistent 37 and up to 43 mpg. Total range of more than 600 miles. City stop and go driving will lower the average considerably.

Users ranked 2012 Nissan Altima against other cars which they drove/owned. Each ranking was based on 9 categories. Here is the summary of top rankings.

Have you driven a 2012 Nissan Altima?
Rank This Car

Can You Rebuild A Cvt Nissan Altima 2.5 Automatic Transmission

Okay so I have a 2012 Nissan Altima 2.5 and and a while ago my check engine light came on I want to put it on the light at O'Reilly's and it shows that there was a mass air flow sensor out so I pur...

Door Lock (actuator) Is Borked - How Do I Open The Door?

Hi! I have a 2012 Nissan Altima. The driver door won't open. The actuator is busted (again). Won't open from the outside or inside. Hard to remove the door panel when the door won't open, but if ...