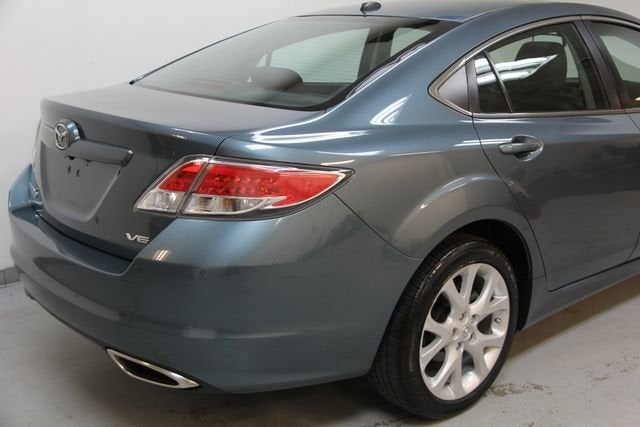 Sporty handling characteristics, a good-looking profile, peppy V6 power, a silky manual transmission with the base trim, a huge trunk and a decently roomy cabin are only a few of the good reasons to check out the 2012 Mazda6 lineup.

An underperforming inline 4-cylinder engine, uninspiring mileage numbers, some cheap-looking cabin materials and a ride that’s on the stiff side won’t impress some prospective buyers of the 2012 Mazda6.

Touted as an affordable family-oriented sports sedan, Mazda’s 2012 Mazda6 pretty much lives up to that part of the bargain. A capacious trunk, a roomy if not plush cabin and available V6 power boost its practicality factor, and a boatload of value can seal the deal. All in all, Mazda’s midsize 4-door remains a wise choice for the daily commute or the obligatory drive to see the folks, but kick a few tires on the competition before forking over your hard-earned money.

Need that sporty feeling for the daily commute or the trip to the mall? Check out Mazda’s 2012 Mazda6 midsize 5-passenger sedan. It won’t overwhelm with power, though the available V6 isn’t bad. Nor will it provide the most comfortable ride, although there are those that are worse. Nor is the somewhat low-end interior anything to write home about, though it’s certainly roomy enough for 4 average-size adults and a small child. Altogether this basic form of motorized transportation isn’t a bad choice for the money, but the smile-heavy driving dynamics claimed by Mazda and virtually all reviews just may not be enough to grab those with an eye toward the long haul.

This few-frills 4-door, virtually unchanged from 2011, is again offered in 6 trims, with “i” or “s” prefixes denoting a 4-cylinder or V6 powerplant, respectively. The base i Sport is followed in ascending order by the i Touring, i Touring Plus, i Grand Touring, s Touring Plus and the flagship s Grand Touring. Lest one get the feeling that purchasing the "s" versions will garner added amenities, this designation applies only to engine size, not to more exotic standard features. In other words, s trims carry essentially the identical amenities as their 4-cylinder i counterparts. And finally, all trims are offered only in front-wheel-drive (FWD) configuration.

That said, other family-oriented sedans to consider in this segment include such Asian exotics as Hyundai’s silky-smooth Sonata, Kia’s good-looking Optima, Nissan’s sport-leaning Altima and Honda’s roomy Accord. For a more domestic option, Ford’s well-wrought Fusion is worth a tire kick or two, while Volkswagen’s Euro-styled Passat is also a solid choice in this loaded-up segment. 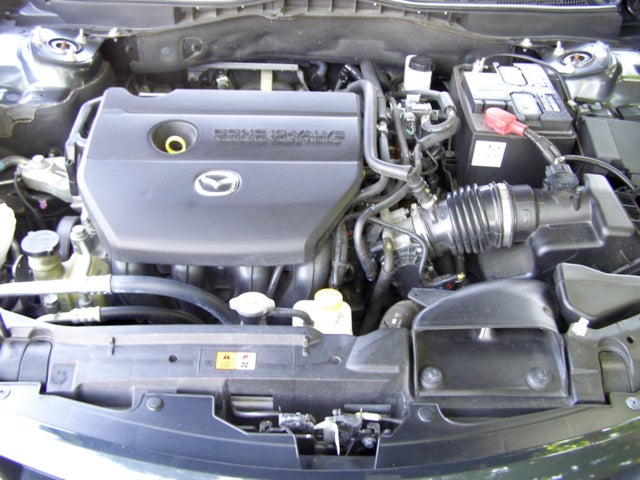 Again, all 2012 Mazda6 i trims are equipped with a 2.5-liter variable-valve-timed (VVT) inline 4-cylinder (I4) engine that’ll put out 170 hp at 6,000 rpm and 167 lb-ft of torque at 4,000 rpm. Standard in the base i Sport is a snappy 6-speed manual transmission, while the rest of the i trims get a competent, if not spectacular 5-speed shiftable automatic. Of course, this 5-speed automatic can also be delivered in the i Sport, but either way, performance numbers are the same. The difference in gear boxes is reflected just a bit in mileage numbers, with the stick-shift i Sport estimated at 21 mpg city/30 highway, while automatics boast a marginally better 22/31.

Those Mazda6 trims sporting the s designation pack a 3.7-liter V6 powerplant with variable valve timing that mates with a 6-speed shiftable automatic transmission for 272 hp at 6,250 rpm and 269 lb-ft of torque at 4,250 rpm. Look for mileage in V6-toting Mazda6s to decline considerably, coming to rest at 18/27.

Tests of I4-equipped trims resulted in a 0-60 time of 9.1 seconds, which is at the low end of average for the class, while the six-banger showed noticeably more giddy-up with a 0-60 time of 6.5 seconds.

Though the majority of reviewers concede that the I4 will prove perfectly adequate for most drivers, its mileage numbers and occasionally lounge-around acceleration are better suited to the stick shift than to the less precisely accentuated automatic. The V6, of course, garners reviewer praise for its superlative scoot, though more than a few reviews note a touch of laziness in the 6-speed shiftable automatic, even in manual mode.

Alas, the consensus of reviewer opinion is that neither engine will win any prizes for fuel efficiency, with some opining that the Mazda6 offers among the worst mileage numbers in its class.

Finally, virtually all reviews mention that on hard acceleration, the four-banger can be unconscionably noisy, though all concede that it becomes fashionably mute at cruising speeds.

Where Mazda’s handsome 2012 Mazda6 shines in the minds of most reviewers is in its heady handling attributes. The 4-wheel independent suspension is bolstered by a double-wishbone front end and multi-link rear suspension, with a stabilizer bar at both ends.

The consensus among reviewers is that this spiffy 4-door handles fast cornering with ease and aplomb, while most agree that steering is decently tight and on center. There are a few, however, that beg to differ on the steering, arguing that it feels just a bit too friendly on the highway.

Alas, in demonstrating average handling acumen, the somewhat stiffer suspension components habitually disallow any sort of posh in ride comfort, according to most reviewers. This is not to say that Mazda’s spiffy sedan is a Sherman tank by any means, just that bumps and imperfections are just a tad more noticeable in this 4-door than in most others.

Almost all reviews do note that wheel and tire size makes little difference to the overall ride, and that at no time does the ride become bothersome. The base i Sport gets 16-inch wheels, while the i Touring, both Touring Plus trims and the i Grand Touring get 17-inchers. The top-shelf s Grand Touring gets 18-inch wheels.

Finally, brakes in the Mazda6 are described by virtually all reviewers as strong and true, with no appreciable pedal glitches. Tests found both the i and s Grand Touring trims to come to a stop from 60 mph in an average of 125 feet, just slightly farther than the class average.

For 2012, Mazda has again equipped its base i Sport with 16-inch steel wheels and power-adjustable mirrors outside, with cloth upholstery, a manually height-adjustable driver’s seat, remote power door locks and power windows gracing the interior. Then there’s cruise control and telescoping tilt-wheel steering for convenience, while the simulated alloy steering wheel and cabin accents add a touch of class. Rounding out the notable standard features, meanwhile, are manually adjustable air conditioning and an MP3-capable single-CD player with 6 speakers.

Move up to the lower midlevel i Touring to get 17-inch alloy wheels, an 8-way power-adjustable driver’s seat, a trip computer, leather and simulated alloy steering wheel and shifter knob, front and rear floor mats and Bluetooth hands-free calling.

The i Touring Plus and s Touring Plus throw in a power sunroof and folding center armrest, as well as a 6-CD changer, while the i and s Grand Touring duo adds leather upholstery, heated front seats, a rear-view camera, dual-zone auto climate control and 10 Bose premium Surround Sound speakers, including a subwoofer. The s Grand Touring, by the way, additionally boasts 18-inch alloy wheels.

All Mazda6 trims can be delivered with available remote engine start, satellite radio and an auto-dimming rear-view mirror with integrated Homelink remote garage door opener, while all trims also remain eligible for a rear deck-lid spoiler.

Each Grand Touring trim can also be equipped with the available Technology Package boasting push-button start, memory for driver's settings, a power-adjustable front passenger seat, heated outside mirrors and a few of the above standalone options. Each of the flagship trims also remains eligible for a DVD-based navigation system with a 7-inch touchscreen display.

Reviewers have mixed opinions regarding this perky 4-door’s cabin accoutrements, with many complaining of too much hard plastic and too many fussy controls, while others laud the simulated alloy accents and the available leather upholstery as suitably upscale for the class. Reviewers agree, however, that the wide rear roof pillars don’t do anything for rearward visibility and that interior storage could be better.

Finally, all reviews concur that the 2012 Mazda6 offers one of the roomier cabins in its segment, bolstered by its surprisingly spacious trunk. Alas, despite this laudable cabin room, a dearth of rear legroom receives a distinct reviewer thumb’s-down.

Standard safety equipment aboard the 2012 Mazda6 lineup includes 4-wheel antilock braking (ABS) with electronic brakeforce distribution, as well as traction and stability control. Front and rear airbags, dual front side-mounted airbags and front head restraint whiplash protection round out the most basic of safety items for all trims.

The i Touring and higher trims additionally sport standard front fog/driving lights (optional in the i and s Sport and Touring variations), with the i and s Touring Plus and Grand Touring editions also boasting standard turn-signal-integrated mirrors and a remote antitheft alarm.

Alas, only the Grand Touring trims are eligible for the available xenon high-intensity-discharge (HID) headlights.

Mazda’s value-laden Mazda6 lineup gets a second-best 4 stars from the National Highway Traffic Safety Administration (NHTSA) in overall safety, with a third-best 3 stars awarded in front impact tests, 4 stars for side-impact worthiness and a top-end 5 stars given in rollover testing.

Among the major issues that owners have with the 2012 Mazda6, the lazy 6-speed shiftable automatic that comes standard with V6-equipped trims results in dashing a few performance expectations. Additional complaints, meantime, involve the underperforming I4 powerplant, especially with the automatic transmission, and some lower-than-expected mileage figures. Poorly placed controls, narrow seats and servicing issues, finally, round out the downside that many owners experience with this otherwise solid sedan.

The Mazda6's looks and smile-inducing driving dynamics, on the other hand, get enthusiastic praise from a majority of owners. Traction on snowy roads, decent V6 power, loads of front-seat headroom, that huge trunk and the unique 6-speed stick shift in the base i Sport trim all gain an additional share of owner kudos, while this nifty sedan’s outright value just keeps on gaining further praise as well.

Have you driven a 2012 Mazda MAZDA6?
Rank This Car

Can I Sell Directly To A Dealer?

Key Won't Come Out Of Ignition

when I shut off the engine the key won't come out

Squeaking Noise Underneath My Car

Hey guys I have a 2012 Mazda 6 I Touring that I just recently bought. And I have discovered that it makes a squeaking noise underneath the car. Its not the belts because I checked those. It's louder u...

Hey guys I have a 2012 Mazda 6 I Touring that I just recently bought. And I have discovered that it makes a squeaking noise underneath the car. Its not the belts because I checked those. It's loud...

101 views with 3 answers (last answer about a year ago)