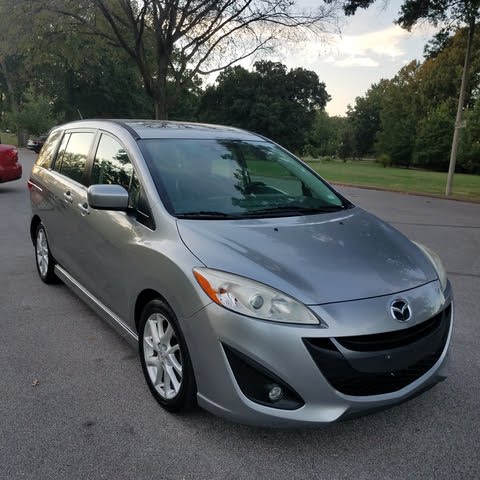 It’s okay, you can admit it: You missed her, didn’t you? With Mazda essentially not offering the MAZDA5 for the 2011 model year, we were left without a true minivan on the market. Some would consider that cause for celebration, but you really don’t know what you have until it’s gone. The bloated behemoths currently congesting America’s roadways simply don’t compare to the true modern minivan of yesteryear – the iconic eyesore at which we all raised our collective eyebrows when Chrysler vomited them into the marketplace a quarter-century ago.

No, the MAZDA5 is truly old-school, keeping it small and keeping it simple. Based on the zippy little MAZDA3, the bigger 5 has been aimed directly at younger parents with younger children. Older kids simply don’t fit in the tiny third-row seats, after all. For its return Mazda has fitted the MAZDA5 with a larger and more-powerful 2.5-liter engine, replacing the outgoing 2.3-liter powerplant. Here it offers 157 hp and 163 lb-ft of torque. It won’t be able to prove anything at the strip, but it’ll make it to 60 mph in about 9 seconds – plenty fast for hauling the kids around. Coming in Sport, Touring and Grand Touring trims, there are two available transmissions dictated by trim. Sport versions get a 6-speed manual, while Touring and Grand Touring trims get a 5-speed automatic, although either tranny will return a manufacturer-estimated 21/28 mpg rating.

While the powertrain news is all improvement, design has been more contentious. Following and in fact leading Mazda’s “Nagare” design efforts, the MAZDA5 has seen many complaints due to its funky side swoops and cheap interior. While the overall visual design has been received with slightly mixed reviews, the abundance of hard, cheap plastics draws much criticism. Perhaps reviewers have forgotten this is a vehicle that lists for less than 20 grand in base trim. Even a fully equipped Grand Touring trim will still roll off the lot for only 5 thousand dollars more, so some concessions had to be made. Unfortunately, the navigation system was one of those concessions, but as aftermarket systems continue to improve in quality and drop in price, this seems a tricky nit to pick.

People will criticize the MAZDA5's sub-30 mpg economy rating as well, but part of its lower price is due to its comparably low-tech powertrain. Look for upgrades in coming years as Mazda continues to upgrade its lineup, however. The trick will be for them to keep the attractive price acceptably low. And really, the MAZDA5 is hardly a stripper even at the base level. Sport trims get standard features like 16-inch alloys and automatic climate control as well as traction and stability control, while Touring trims enjoy hands-free Bluetooth and a leather-wrapped tilt and telescoping steering wheel. A sunroof and upgraded stereo with satellite radio are standard for the top-tier Grand Touring and optional for the Touring trim, but special features such as heated leather seats and mirrors, automatic xenon headlamps and rain-sensing wipers are Grand Touring exclusives.

That’s not a bad setup for less than 25 grand, and all in a package you can actually navigate around city streets and parking lots without needing a moving permit. Design elements may be contentious, but the core principle of the MAZDA5 is hard to argue with, and until the Ford C-MAX arrives, it’s hard to compete with as well.

Have you driven a 2012 Mazda MAZDA5?
Rank This Car

Do You Deliver The Car?

How Do I Sell My Used Car Here?

procedure for selling my car on cargurus

Where on Earth do I find the oil filter in a 2012 Mazda 5 diesel Sport?? I have looked everywhere beneath the car and within the engine bay and cannot locate it to change it.

294 views with 3 answers (last answer about a year ago)

Last night, car in garage. Suddenly siren wailing from the garage. it was the van, lights also flashing. I put the key in the ignition and started the car. That killed the siren and the flashing...