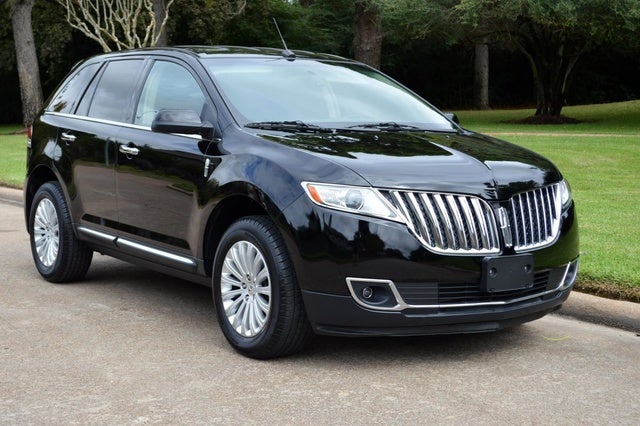 Frustrating and unwieldy infotainment systems, some rather dated styling touches, a lazy automatic transmission and tepid driving dynamics keep this luxury-oriented ute from being all it can be.

Those who want luxury, practicality and potency at a tolerably affordable price would be well-advised to check out Lincoln’s 2012 MKX. However, bring along a couple of 10-year-olds to help figure out the various SYNC and MyLincoln Touch features, as these can be a distinct downside to this otherwise well-conceived crossover. Smooth and comfortable, with a second row that actually flaunts adult-size leg- and headroom, the MKX represents its legendary maker well.

Need a classy and practical conveyance for the daily commute or those trips to the mall? Kick some tires on Lincoln’s luxury-oriented 2012 MKX midsize crossover ute. This 5-passenger, 5-door chariot offers, besides genuine 3-adult rear seating, a decent 32.3 cubic feet behind the rear seats and 68.6 cubic feet of cargo area with the rear seats folded, which, though not cavernous, isn’t exactly paltry. Again, this cute-ute comes in a single trim that boasts standard front-wheel drive (FWD), but of course, it also remains available with intelligent all-wheel drive (AWD) if a lot of winter driving is in your future.

Since its introduction for the 2007 model year, and after a hefty rework in 2011, this midsize mini-ute sees few changes for the second year of its next-gen iteration. The touted THX II premium sound system is now optional in a couple of packages, while the available Limited Edition MKX gets a larger badge. Finally, 4 new exterior colors are added to its palette.

Though this premium crossover’s styling touches could use a bit of an update, what most reviewers dislike about the MKX is the over-abundance of imperfect electronic gizmos. Furthermore, reviewers are quick to point out that Ford’s well-wrought Edge, on which the MKX is modeled, offers nearly the same features when loaded with options, though it won’t, of course, have that distinctive Lincoln cachet. On the positive side, reviewers remain impressed with this people-hauler’s ride comfort, quietness and overachieving V6 powerplant. As for driving dynamics, well, the MKX certainly isn’t a sports car, but it never claimed to be. Reviewers nevertheless remain pleased with its nicely weighted steering and reasonably well-modulated handling capabilities.

Seeking alternatives? Audi’s Q5, BMW’s X3, Mercedes-Benz’s GLK350 and Cadillac’s SRX all give the midsize Lincoln crossover a run for its money in refinement and premium perks, but “money” is the operative word, with all three rivals costing significantly more. Same thing with Acura’s MDX and Lexus’ RX 350, though each of these offers a bit more cargo room.

All in all, the MKX is a solid choice for a family that desires a bigger bang for its luxury-crossover buck.

The sole powertrain for Lincoln’s 2012 MKX remains a variable-valve-timed (VVT) 3.7-liter V6 engine that mates with a 6-speed shiftable automatic transmission for 305 hp at 6,500 rpm and 280 lb-ft of torque at 4,000 rpm. All this power is good to tow up to 3,500 pounds of trailer, with the proper equipment, while gas mileage in the standard FWD versions is estimated at 19 mpg city/26 highway.

The available intelligent AWD system, meanwhile, boasts normal cruising in FWD, with automatic and instantaneous transfer of torque from the wheels that slip to the wheels that grip when conditions warrant. Gas mileage in this snow-beating beast, however, drops to 17/26, with towing capacity dropping to just over 3,200 pounds.

Testing of the 2012 MKX found an AWD-equipped version going from 0-60 in 7.3 seconds, which is pretty much standard for the class. Engine noise on hard acceleration is described by most reviewers as a satisfying growl, with a stately descent into silence at highway speeds. Though they note that the 6-speed automatic has some occasional issues with lazy downshifting when in full automatic mode, reviewers are lavish in their praise of the steering-wheel-mounted paddle shifters that come standard in both FWD and AWD versions.

As with its Ford Edge cousin, the 2012 MKX rides on a 4-wheel independent suspension boasting MacPherson front struts. A multi-link rear end is further complemented by stabilizer bars front and rear, while all MKXs roll on standard 18-inch alloy wheels mounting all-season tires.

Ride comfort in Lincoln's midsize ute is described by most reviewers as well-controlled over all but the most egregious road imperfections. Though the available 20-inch wheels will firm up the ride considerably (possibly a bit too much for some) the MKX still acquits itself in a comparable manner to its luxury-oriented competitors.

Reviewers find Lincoln’s downsized ute to be rather uninspired, handling-wise, but with good steering feel, at least at highway speeds. At low speeds, however, many reviews note that the MKX can feel more than a bit ponderous, while sharp corners at all but dead-slow speeds will produce an immodest amount of body lean. This crossover is designed for touring and remains, in the opinion of most reviewers, one of the better crossovers out there, posh-wise.

Brakes, finally, were tested and found a bit wanting, with an average stopping distance of 134 feet from 60 mph. Additionally, a few reviewers find the brake pedal a bit spongy.

A leather steering wheel with mounted cruise and audio controls adds a touch of class, as do leather, alloy and chrome interior accents. All of this is, of course, embraced by dual-zone automatic climate control, with driver memory settings for seat and mirrors completing the picture nicely.

SYNC and MyLincoln Touch voice-activated and touchscreen infotainment is standard, as is Bluetooth hands-free communications technology, while a single-CD player with 10 speakers is complemented by satellite radio, auxiliary iPod and iPhone integration, a memory card slot and a USB port.

One of the more elaborate (and pricy) options packages is the Rapid Spec 101A Package, which includes a heated steering wheel, upgraded leather upholstery, heated second-row seats, a rear-view camera and upgraded 20-inch wheels. The available Rapid Spec 102A package adds a power panoramic sunroof, voice-activated navigation, a 14-speaker THX II premium audio system and dual-screen rear-seat DVD entertainment to the 101A package, while the Limited Edition Package throws in genuine aluminum interior accents, along with various unique interior and exterior trim pieces.

Genuine wood cabin trim accents, a Class II trailer hitch and wiring, and a roof rack with side rails, meanwhile, are all available standalone options, as are, of course, a number of the above packaged items.

The standard SYNC/MyLincoln Touch infotainment system, with voice activation and various touchscreens, continues to be difficult to master and often loaded with glitches, according to virtually all reviews, especially when endowed with the available navigation feature. This system has been out there for a couple of years now and is inarguably state-of-the-art. However, a constant theme since its inception has been the fact that, in the opinion of an overwhelming majority of owners and reviewers, it refuses to perform as advertised, with some reviewers wondering if it’s more of a distraction than an advantage.

Otherwise, reviewers are quite taken with this luxury crossover’s comfortable and roomy cabin as well as its plethora of convenience, class and ambiance. The redundancy of the steering-wheel-mounted controls, as well as backup readouts available on the trip computer and (when decipherable) the infotainment screens continue to impress a number of reviewers as well.

Optional safety features again include Ford’s BLIS blind-spot warning system with cross-traffic alerts, as well as adaptive high-intensity discharge (HID) headlights, turn-signal-integrated mirrors, adaptive cruise control with collision warning, and rain-sensing wipers, all available in one or another of the various option packages.

The Insurance Institute for Highway Safety (IIHS), meanwhile, awards the MKX its Top Safety Pick Award for 2012, giving it a top-notch rating of Good in all tested criteria.

The often frustrating SYNC and MyLincoln Touch systems are a definite downer among a vast majority of owners, with most lamenting the steep learning curve and disappointing number of glitches inherent in this overarching techno-jumble. A number of owners also lament that mileage numbers are found to be less than advertised, while others are unhappy with a perceived lack of seat support and a few low-grade interior touches, a sub-standard cargo cover being chief among these.

Those owners who master the challenges of technophobia and lead-footedness, however, laud Lincoln’s well-wrought midsize crossover as comfortable, quiet and potent, fully representative of its high-end pedigree. A smooth ride, loads of standard luxury features, practical, if not class-leading cargo capacity, and the peppy V6, as well as a wide selection of useful and upscale options, keep most owners proud of their new MKX.

Kevin The best pro: the comfort of the seats. It does not excessively over-hug the legs and back, but is very firm and gives a buoyant feel to the ride. Cons: the car pulls to the left and right, no matter how many alignments are done. The SYNC was often down for about 4 minutes (no radio, no phone etc) while spontaneously rebooting. Then, eventually, after the warranty ended, it just stopped working entirely. This means no radio, no sirius, no USB ports, no navigation, no rear view screen. Unfortunately, you can't just drive in to your local Lincoln dealer and get this fixed. It's a series of phone calls, setting up appointments, being told it's a long process but that I don't get a loaner. Go Lincoln!

Have you driven a 2012 Lincoln MKX?
Rank This Car

406 views with 2 answers (last answer about a year ago)

Hi, After 6 hours of a trip recently, the MP3 player that was connected abruptly stopped transmitting through the USB port and at the same time the GPS system stopped and said that I needed to insert ...

Is It Normal For An AWD Car To Pull To The Left And Right? I Bought A Linc...

My 2012 Lincoln MKX makes a loud, "hooting" squeeking noise if the steering wheel is turned to the left or right, only after being in park. When the wheel is straightened after turning, noise proceeds...