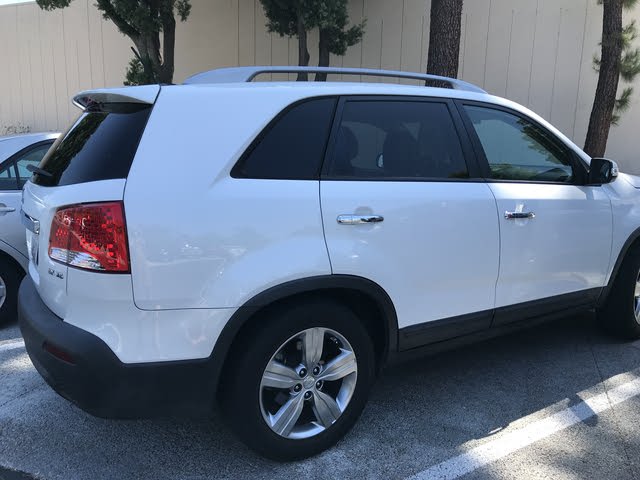 The 2012 Sorento's optional third-row seat remains too tight for most adults, and some owners say their vehicles don't deliver the fuel-economy numbers promised by the automaker.

The Sorento does a good job of mixing style and functionality, and new features for 2012 help make it more competitive in a very crowded market class. An available third-row seat, while too tight for anyone but small children, pushes passenger capacity to 7, which adds to its practicality. Although some owners complain about the Sorento's fuel-economy numbers, the vehicle offers a solid list of standard features and a choice of capable powerplants, making it a vehicle that should be considered by prospective buyers seeking an affordable, well-equipped and practical daily commuter.

Following a full redesign in 2011, the Kia Sorento receives some minor updating and a new mid-level powerplant for 2012. The automaker offers the Sorento in Base, LX, EX and SX trim levels, and equips the Base and LX trims with its entry-level 175-hp 4-cylinder engine. Standard on the EX trim and available on the LX is a new 4-cylinder GDI engine, which is actually an upgraded version of the entry-level powerplant equipped with a cutting-edge direct-injection fuel system. The upgrade pushes horsepower for the new 4-cylinder engine to 191 and fuel economy numbers up to 32 mpg. Owners can also outfit both the LX and EX with an optional 276-hp V6. The top-level SX trim receives only the V6 powerplant. All trims ride on a front-wheel drive (FWD) platform, which comes standard, although owners can add the automaker's full-time all-wheel-drive (AWD) system at the LX, EX and SX trim levels.

Lower-end Sorento trims receive new YES-Essentials cloth seat fabric, which has anti-bacterial and anti-soil properties. Kia also offers a number of additional standard and optional features for 2012, including a heated wood-trim steering wheel and heated and ventilated seats for the SX trim, a power-adjustable passenger seat and optional power exterior folding side mirrors. In addition, Kia introduces a new UVO voice-activated infotainment system for EX trims and above.

Kia routinely touts the fact that the Sorento was its first vehicle built in the U.S., at a plant in Georgia. It also gives the Sorento a strong list of standard features, equipping it to take on such formidable class competitors as the Honda CR-V, the Toyota RAV4, the Chevrolet Equinox and the Dodge Journey. With its available third-row seat pushing passenger capacity to 7, the Sorento competes well against such 2-row vehicles as the CR-V and Equinox, while the RAV4 offers a tight third-row seat similar to the Sorento's, and the Journey delivers a similar-sized vehicle with 3 rows of seating at a lower price point. However, several reviewers note that if you require a vehicle with 3 rows of seating, you might want to look at a larger crossover vehicle or full-size SUV.

Outside, the Sorento displays a sleek, contemporary design, with a rounded nose, distinctive grille, wraparound headlights and an angled roof line, as well as heated exterior mirrors with integrated LED turn signals on all trims except the Base. The EX and SX add automatic headlights, foglights, roof rails and a rear spoiler, as well as new optional power folding mirrors, while the SX also includes a chrome exhaust tip, stainless-steel accents and LED taillights. 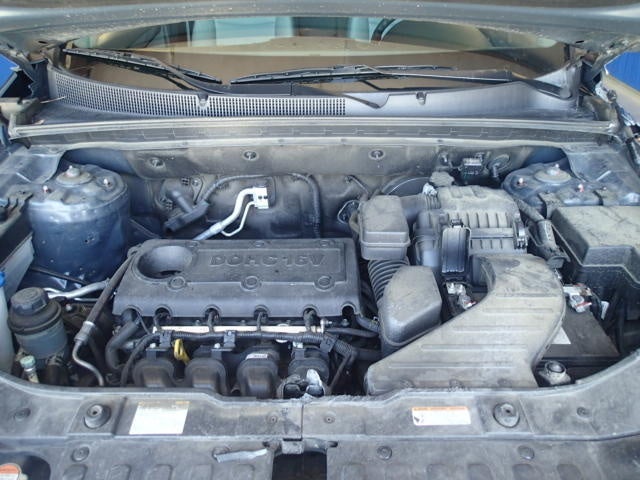 The Sorento's 3 powerplants give prospective buyers a variety of choices when it comes to performance and fuel economy. All 3 engines provide good power, though some testers say the entry-level 4-cylinder engine struggles at times at higher speeds or when the vehicle is heavily loaded. The V6, on the other hand, provides brisk performance while still delivering relatively decent fuel-economy numbers.

Powering the Base and LX trims, the 2.4-liter 4-cylinder produces 175 hp and 169 lb-ft of torque. A 6-speed manual transmission comes standard in the Base trim, while the LX gets a 6-speed automatic transmission equipped with a Sportmatic manual-shift feature. Fuel economy numbers for the entry-level engine check in at 21/29 mpg for FWD trims and 21/27 when the LX trim is equipped with AWD.

The new 4-cylinder GDI powerplant, standard for the EX and available for the LX, generates 191 hp and 181 lb-ft of torque. Thanks to its upgraded technology, it posts fuel economy numbers of 22/32 in FWD trims and 21/28 in AWD trims. It links to the Sportmatic automatic transmission on both trims.

At the top of the line, the 3.5-liter V6 engine, which comes standard on the SX trim and is optional for LX and EX trims, pumps out 276 horsepower and 248 lb-ft of torque. It also links to the Sportmatic transmission and provides peppy acceleration, driving the Sorento from 0-60 in about 7.4 seconds. Fuel economy numbers check in at 20/26 for FWD trims and 18/24 for AWD trims. AWD trims also receive a locking center differential, which evenly distributes torque to all 4 wheels at low speeds or in inclement weather conditions.

The Sorento's suspension delivers a firm ride with minimal body lean, testers say, and does a good job of smoothing out rough road surfaces. However, some owners find the ride a little harsh. Motor-driven power steering provides precise, responsive handling, while the braking system delivers plenty of stopping power and remains one of the best in the class, according to reviewers.

The Sorento rides on a compact, lightweight MacPherson strut front suspension with coil springs and a stabilizer bar, and a fully independent multi-link rear suspension, also with a stabilizer bar. The SX receives an upgraded suspension with the automaker's Dual Flow Damper shocks, which provide a lower stance and a smoother overall ride. The Base and LX trims ride on 17-inch wheels, while the EX gets 18-inch wheels with a hyper finish. The SX receives 18-inch wheels with a mirror finish.

The Sorento's well-equipped cabin gets good marks from reviewers, not only for its design and classy look, but also for the quality of its interior materials. Soft-touch surfaces provide a good counterbalance to hard plastics, and controls and gauges are well-placed and easy to use. First- and second-row seats are comfortable for long trips, with plenty of legroom and headroom for occupants. The driver's seat sits high and offers a good view of the road ahead. However, the Sorento's optional third-row seat, which seats 2, remains too cramped for most adults.

The Sorento includes a number of lineup-wide standard features not found on some competitive vehicles, including Bluetooth, a tilt/telescopic steering wheel with integrated audio controls, remote keyless entry and SiriusXM satellite radio, part of the vehicle's 6-speaker AM/FM/CD/MP3 audio system, which also includes auxiliary and USB audio input jacks. In addition, an EcoMinder Indicator, which comes standard on all trims, helps owners drive more efficiently, and the 40/20/40-split second-row seat includes an armrest with a cup holder. Air conditioning, a trip computer, cruise control and power windows and door locks are among the other standard features across the line.

The LX trim adds a few exterior features, an available third-row seat and a number of optional packages, including a Convenience Package with heated front seats and a backup camera with a rear-view-mirror display. Stepping up a notch, the EX includes a power-adjustable driver's seat, automatic climate control, push-button start, a leather-wrapped steering wheel and shift knob, a backup camera and an outside temperature display, as well as such options as leather upholstery and navigation. The EX also gets the new UVO infotainment system, which provides hands-free connectivity with smartphones and other wireless devices, similar to Ford's SYNC system. At the top of the line, the SX includes such features as leather upholstery, heated and ventilated front seats, memory settings for the driver's seat, a 4-way power-adjustable passenger seat, a heated wood-trim steering wheel and an auto-dimming rear-view mirror, as well as a navigation system and a 10-speaker audio system.

While overall owners say they like the Sorento, a number of them have reported getting unsatisfactory fuel economy numbers from their vehicles. Owners also note that there's not a significant difference in fuel economy between the 4-cylinder and V6 engines, prompting many of them to recommend the V6. The Sorento offers plenty of room inside its comfortable cabin, owners say, as well as good performance and handling. In fact, it should be noted that a great number of owners find the Sorento the perfect vehicle for their needs. They find it the ideal compromise between the typical family sedan and the larger SUVs, and they like its overall value and solid list of standard features. However, a small but vocal group has reported build-quality problems, and fuel economy remains the biggest reason for owner dissatisfaction with the vehicle.

jacobmc I cannot get the seat memory to set. I hold the ,set, to beep, but when I hit the #, the seat retracts.

Users ranked 2012 Kia Sorento against other cars which they drove/owned. Each ranking was based on 9 categories. Here is the summary of top rankings.

Have you driven a 2012 Kia Sorento?
Rank This Car

I ave a 2012 sorento wont start and strart sometime no, i ave e new battery

Changed both hood lift supports for my trunk/tailgate and it still won't stay open itself.

AM Radio Not Working Just Get Static

FM, Satellite radio, bluetooth all working fine, AM radio not working at all, just get static

What Part Is Under Driver Seat Undercarriage ( Black Box) And Supported ?