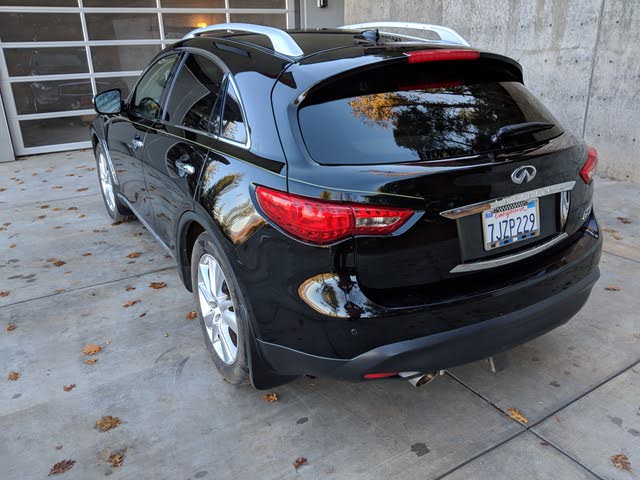 While other manufacturers rolled into the crossover SUV market with little panache, Nissan’s Infiniti division made a splash with its FX series, offering a sportier look than most. The FX35 is the smaller vehicle in the lineup, with a 3.5-liter V6 engine with 303 hp, 262 lb-ft of torque and an electronically controlled 7-speed automatic with manual shift mode and a rear-wheel drivetrain; AWD is also an option.

Packages available include the Premium, with a hard-drive-based navigation system with 8-inch display, streaming Bluetooth and an in-dash CD/DVD player with an 11-channel Bose speaker system. If you want to go even sportier, the Deluxe Touring package livens things up with 20-inch spoke wheels and maple interior accents. For an even safer ride, the Technology package includes intelligent braking, lane departure warning and intelligent cruise control, which automatically adjusts speed depending on traffic conditions. These sound great in theory, but in practice, they may tend to annoy.

The FX is a good-looking vehicle, no doubt, with the 2012 version given a slight refresh in the front grille and fascia design, influenced by Infiniti’s Essence Concept. It’s got curves in all the right places. With the exception of the Limited Edition, the color palate of the FX35 is a glossy array of grays, browns, and blacks.

In the driver’s seat, you truly feel in command. Leather-appointed 10-way adjustable seats make sure the ride is comfortable, and all FX models now come standard with heated seats, so you’ll be cozy as well. The distinctive instrument panel with its luminescent gauges adds a touch of class.

And while visibility may be an issue, Infiniti has its unique Around View Monitor, which uses exterior cameras to create a bird's-eye view of your car and any surrounding obstacles, making parking a snap; this is available as an option for the FX35.

Safety-wise, the FX35 comes standard with dual-stage front as well as side-impact airbags for the front seat and roof-mounted side curtain airbags for the rear. A special, simplified anchoring system for child seats is also included.

The question is, if you are going this far, shouldn’t one just ramp up to the FX50 for all that V8 goodness? People seem to be divided on the issue, with some saying the FX35 has plenty of pickup and power and others saying there's just no comparison between the two. Our advice is to be sure to test-drive both models, and then check with your heart (and your bank account) before reaching a final decision.

Dave I would say that review is what I experienced in a 2012 FX35 that was 3 years old and 60k miles later.

My Car Says "no Key" When My Key Is In The Car. I Changed The Battery And...

How Much Do You Charge To Sell A Cat?

what is total cost by cargurus to sell?

Has Anyone Else Had A Problem Losing Things In The Console?

I've had my FX about 4 months now and love it, but I've had one small issue. The console/armrest in between the front seats has a small upper storage area and a much larger lower area. To get to the...