Fuel economy in the luxury SUV segment is never great, and that’s certainly the case with the 2012 Audi Q7—but if that’s your concern, you’re probably not looking at an Audi in the first place. The TDI provides the most fun, thanks to its monster torque, and it’s the best at the pump as well. Go for the adaptive suspension for the best ride, but watch that options list as the price can climb steeply.

Audi gives the base engine in the Q7 a small power increase for 2012, but otherwise leaves this luxury crossover alone. Years ago, people would have laughed at the idea of an SUV that really can’t go off-road, but use determines utility, and most simply don’t stray from the pavement. Still, with all the room of a station wagon coupled with the stability and security of some extra ground clearance and AWD, the crossover segment has blossomed. Here, Audi makes no claims to off-road prowess and no sacrifices either. The Q7 is designed to handle well on the road, even when things get messy.

With seating for 7, a well-sorted suspension and a trio of competent engines, the Q7 will do everything you need it to—as long as rock-climbing or mudding isn’t your preferred weekend activity. It’ll park just fine on the grass next to Jimmy’s soccer field, and it’ll get the whole family home during that snowstorm that cropped up in the middle of Sally’s basketball game. 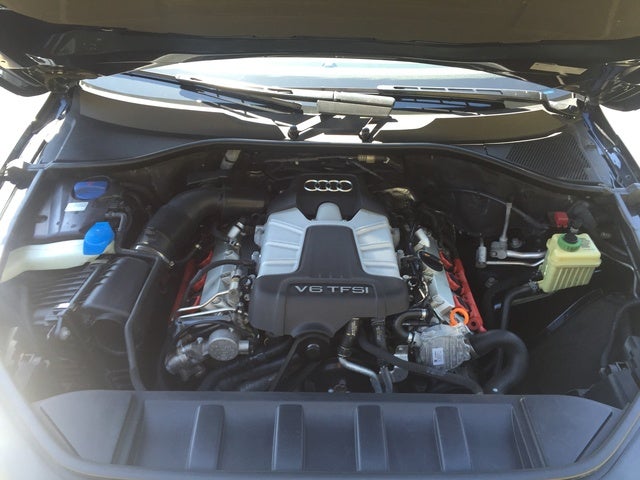 How you get there is up to you. Even the base engine for the 2012 Q7 3.0T Premium trim is stout here—a blown V6 that gets 8 extra horses for 2012. Its 280 hp and 295 lb-ft of torque certainly won't zip the 5,000-plus-pound Q7 around with any kind of sprightly rapidity, but it’s enough that you won’t be mashing the accelerator in frustration, either. It’ll manage only 16 mpg city/22 highway, however, and it requires premium at the pump.

But there’s another option that offers more power and no fuel penalty – a 333-hp version of the same engine with a similar torque boost up to 325 lb-ft. It comes with the S-Line Prestige trim, and it has the same 16/22 rating as the 280-hp version with significantly more power—enough to scoot the Q7 to 60 mph in under 7 seconds.

These are both fine engines with plenty of power, but 16/22 is a dismal rating even for a luxury crossover. The better option is the 3.0-liter turbodiesel in the 3.0TDI Premium. While horsepower is down to 225 here, torque is an inspiring 406 lb-ft and available at just 1,750 rpm, making it the most fun to drive of all three powerplants. You’ll be rewarded at the pump with a 17/25 rating, according to Audi, but testers have been finding combined fuel ratings of 26 mpg and more. Keep in mind the urea-injection system will require periodical dealer maintenance, though.

An 8-speed automatic transmission is the sole option regardless of trim or engine, but it operates smoothly and without drama. Quattro AWD is standard here, and properly equipped, the Q7 can tow up to 6,600 pounds, which is more than enough for the boat and the kids and the cooler. Maybe even a dog or two as well.

The suspension setup of the 2012 Q7 provides a car-like experience despite weighing nearly one and a half times as much as your typical sedan and twice as much as some compacts. Harshness increases as you move from 18- to 19- and 20-inch wheels with the three trim levels, but an optional adaptive air suspension for the TDI and S-line Prestige trims eases the ride if not the wallet. However nothing will help the 21-inch wheels that are optional with the S-line Prestige trim and should be avoided.

The Q7 is helped by light steering at slow speeds, but suffers from an expected large turning radius. Brakes are firm and stop the large crossover with confidence. While the Q7 can out-handle most rivals, don’t forget this is still a large and heavy SUV and should be treated accordingly to avoid disturbing lean in hard cornering, lest you frighten tiny passengers into appointing a new field trip driver.

The Q7 shines inside with 7-passenger seating and one of the best interiors in the segment. Many German interiors can feel a bit cold, but the leather seems softer here, the wood warmer. While a third row is quite useful, it’s purely for those who cannot vote yet, as full-size adults will have trouble even saddling up let alone spending any time back there.

With second- and third-row seats folded flat, the Q7 offers 88 cubic feet of cargo space, accessible from a power liftgate. Some complain the loading bay is too high, but that’s the price paid for SUV style over station-wagon practicality. Rear parking sensors, automatic wipers and dual-zone climate controls are all standard, as well as heated front seats with 12-way power and leather. You’ll also get a tilt and telescoping steering wheel, Bluetooth, Audi’s Multi Media Interface (MMI) and an 11-speaker sound system with satellite radio, 6-CD changer and iPod interface.

The S-line Prestige trim comes with a blind-spot alert and a front-obstacle detection system, and the steering wheel gets power for the tilt and telescoping features. Front seats get ventilation as well, and rear dual-zone automatic climate controls are added. A navigation system with voice recognition and traffic allows you to ask for the nearest gas station or coffee shop, and a rear-view camera means you won’t run over any scooters on your way out. The driver gets a memory system here, and the cool factor is upped via keyless access and start, a power sunroof and a Bose stereo with HD radio.

Front, rear and center limited-slip differentials are complemented by traction and stability control. Assisted 4-wheel antilock discs bring things to a halt in a hurry, and hill decent control keeps the Q7 from getting away from you. It also has daytime running lights, a rear-obstacle detection system and front and rear fog lights, all standard. Dual front, front-side and curtain-side airbags can be supplemented by optional thorax airbags as well, and the S-line Prestige adds blind-spot alert and a front-obstacle detection system—a feature that used to be called “the windshield.”

The Insurance Institute for Highway Safety has awarded the 2012 Q7 its top rating of Good.

Owners love the suspensions and engines the Q7 offers, but are dismayed by the overall weight and cargo utility of the big SUV. While its longer wheelbase offers a more composed ride than competitors like the Touareg and the Cayenne, the larger wheels disrupt this advantage, and limited cargo capacity annoys thanks to the third-row seat. Still, the Q7 has better on-road manners than competitors in one of the most attractive packages in the segment.

Users ranked 2012 Audi Q7 against other cars which they drove/owned. Each ranking was based on 9 categories. Here is the summary of top rankings.

Why My Q7 Started Leaking Oil Within 2 Years Of Purchase

I bought Q7 2 years ago , around 18 months after purchase started leaking engine oil, repaired with dealer for 3 days , still leaking , is this Car is always like this , This is the worse car I bo...

Why Are My Brakes Sounding Like They Are Grinding?