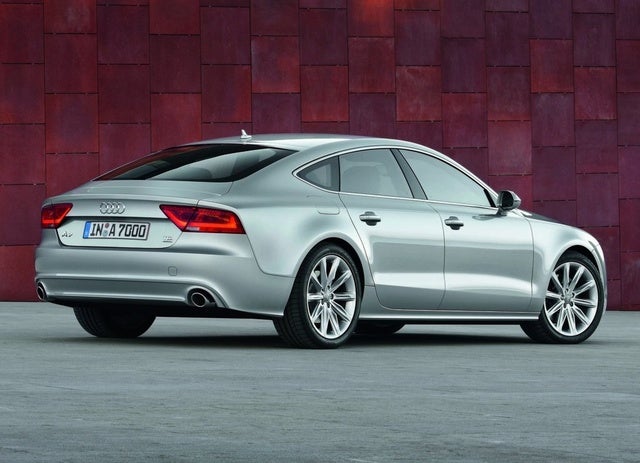 Audi had a choice in building its new 5-door coupe, the A7 – luxury comfort or sport stylings. As is its habit of late, Audi chose the latter with an emphasis on style, something that simply can’t be said about competitive offerings from BMW and Porsche.

No one is going to claim the 5 Series Gran Turismo or the Panamera lacks in performance – although the A7 will out-do a similarly equipped Panamera – but style is a different story. Both of the other German offerings appear as afterthoughts, with their raked roofs pouring over bulbous rears that look artificially inflated. The A7 on the other hand simply looks correct. Balanced. Fast.

A 5-door coupe is not a new idea, not even for Audi. More than 30 years ago they were utilizing the same concept with the 100 Avant. No, the A7 isn’t new, it’s just better.

In fact, there’s a lot that’s better in the A7, like its connectivity and navigation software. With a SIM card, you have independent – if not free – 3G connectivity via your own mobile WiFi hotspot, and the nav system uses Google Earth software. That’s better. It drives like an A5 and shares modular architecture with the new A6. That sounds better, too.

But marketing aside, this is just a sedan – nothing more, nothing less. Actually, a bit less, as the A7 has seat belts for only two rear passengers, eschewing the piddling middle position manufacturers usually cram into the back seat. Perhaps that’s better too, as two adults actually have room to rest and not just ride in the rear of the A7. The raked roof will certainly impede headroom for those well over 6 feet, but average adults will do just fine.

And with 310 hp and 325 lb-ft of torque, your three passengers will have to hang on as Audi’s Quattro AWD system tosses them from side to side with the help of front-rear torque vectoring that sends 60 percent of those 325 lb-ft to the rear wheels by default, with capabilities of sending up to 85 percent rearward or 70 percent to the front under differing conditions. The 3.0-liter V6 is direct-injected and fitted with a Roots-type blower; you can also find it in the S4 and A8. The EPA is estimating fuel economy at 18 mpg city/28 highway with a combined rating of 22 mpg, but long-term testers are finding the A7 nestling more comfortably in the teens with a mix of driving conditions. The electronically assisted steering isn’t the best, but it’s adequate, and Audi has hinted at further improvements. With the optional adaptive air suspension, drivers can choose from several setups that will adjust ride height, throttle and steering response, and while the most aggressive “Dynamic” setting will add a bit of weight to the super-light steering, it doesn’t do anything to improve the feel or response.

Still, tech seems to be the highlight of the A7, with a list of standard and optional features that would make any technophile drool. Your best bet is the Prestige Package, which will get you Audi Connect, 4-zone automatic climate controls, a stereo upgrade to a Bose system, nav, adaptive headlights, a smart key and parking sensors. You’ll also be treated with S exterior touches and additional add-ons for just $6,330, still undercutting the Porsche by more than 10 grand.

In all, the A7 looks and behaves like a much smaller car. That’s a good thing, since even with weight-saving measures employed by Audi, like an aluminum hood, front quarter panels, doors and tailgate, the A7 still arrives at well over 4,000 pounds. The steering could use some attention, but otherwise everything seems to have been done right. At the very least, it’s won the beauty portion of the competition.

abdul Beautiful Vehicle..... Classy Classic Eye Catching plenty of Hidden Power and last but not least, very very Safe all the things that matter most !!!!!!!

Users ranked 2012 Audi A7 against other cars which they drove/owned. Each ranking was based on 9 categories. Here is the summary of top rankings.

GuruG39XV asked a 2012 Audi A7 3.0T quattro AWD Maintenance & Repair question about a year ago

How Is Water Getting In Engine

What can be causes of water in engine if its is Not a head gasket?

How Long Does A Audi Engine Last? Specific: 2012 Audi A7 Prestige.

Can't Get To The Next Step In Purchase

I am trying to buy a car from a private party. I applied for loan on your website but I didn't get a letter from the lender saying that I got the loan. However, the seller received an email saying...