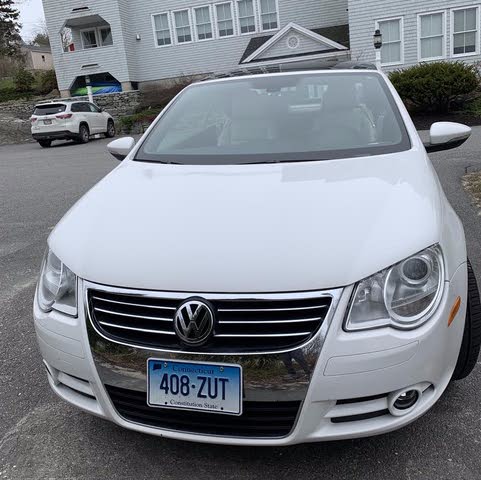 Subtly upgraded for 2011, Volkswagen’s stylish Eos convertible offers the convenience of a folding metal hardtop at a (relatively) affordable price. First introduced on these shores in 2007, the Eos is configured as a front-wheel-drive car with four-cylinder power. Though it’s not the sportiest convertible on the market, the 2011 Eos still offers more European flair than the Chrysler Sebring, its closest competition.

Once the exclusive preserve of high-dollar drop-tops such as the Mercedes-Benz SL, the folding metal top has now filtered down to more affordable machinery like the Eos, VW’s replacement for the long-lived Cabrio. Despite increased weight, cost, and complexity, folding metal hardtops pay major dividends in silence and comfort when raised. The Eos even offers a sliding glass moonroof that can be operated when the top is up, a unique feature that not even pricey Mercedes or BMW convertibles can match.

For 2011 Volkswagen has seen fit to grace the Eos with new front and rear fascia, along with some minor interior styling updates. Borrowing some details from corporate sibling Audi, the 2011 Eos gets new LED headlamps along with a more aggressive grille and bumper treatment. The tweaks greatly enliven the appearance of the Eos, adding some much-needed sneer to what was a fairly frumpy design. As expected, a variety of new wheel designs complement the look. Overall the Eos possesses a sleek, integrated European look, much more eye-catching than the comparably priced Chrysler Sebring, which also offers a folding metal roof.

Under the hood a 2.0-liter inline four-cylinder (I4) engine carries over. With standard turbocharging this direct-injection mill features dual overhead camshafts and makes a respectable 200 hp and 207 lb-ft of torque. Though reasonably peppy the 2.0-liter’s main attributes are good fuel economy and smooth operation. Shifting duties are handled by either a six-speed manual gearbox or VW’s novel DSG twin-clutch automatic transmission. While the six-speed greatly enlivens the Eos’ performance, the DSG is more in keeping with its status as a boulevardier. Overall, acceleration is adequate, if not exactly brisk, and both transmissions shift smoothly through the gears.

Though face-lifted outside the 2011 Eos retains the same chassis as prior models. Body rigidity is especially important in convertibles, and VW has done a decent job of ensuring the Eos’ structure is flex free. With the roof up the usual quivers and shakes are nonexistent, though large bumps can elicit some chatter from the roof panels. Drop the top and some cowl shake will make itself known, but this is to be expected in a convertible, and the Eos falls well within the acceptable range of stiffness. Additional chassis bracing adds weight, however; the 2011 Eos tips the scales at a relatively portly 3,500 pounds, much of it carried over the front wheels.

With all that weight and minimal emphasis on friskiness, you might expect the 2011 Eos to acquit itself rather poorly in corners, yet a brisk drive yields pleasant surprises. Though far from a sports car, the Eos features enough starch in its independent suspension to keep its European pride intact. Cornering limits aren’t high, but the steering is nicely weighted and body lean isn’t excessive, especially when compared with Chrysler’s plodding Sebring. Comfort is very good, as the sophisticated suspension soaks up big bumps while delivering a smooth highway ride.

Volkswagen offers the 2011 Eos in two trim levels, Komfort and Lux. Komfort trims are well-equipped with a standard power driver’s seat, a leather-wrapped steering wheel, and a powerful stereo with 6-CD changer. Also included are 16-inch alloy wheels and, of course, the power folding hardtop with sunroof. The step-up Lux trim gets the DSG twin-clutch automatic transmission standard, along with an upgraded stereo with 600 watts of power and 17-inch alloys. Navigation, xenon headlights (replacing the LED units), and parking sensors are optional on both trim levels.

The interior of the 2011 Eos features Volkswagen’s usual high-quality plastics and straightforward design. Though nominally a four-seater, its paltry 32.5 inches of rear legroom make long trips in back a chancy proposition. The front seats are firm and quite supportive, in the German mold, with convincing "leatherette" upholstery on Komfort models and real hides on Lux-trimmed Eos’. Lux trims also feature a useful easy-entry feature that powers the front seats forward for better access to the back row. Ergonomics are excellent, and the switchgear moves with expensive, dampened motions. Under-the-decklid trunk space is at a premium, however; only 6.6 cubic feet are available with the top down.

Safety and security features abound in the 2011 Eos. Standard front, side, and curtain airbags help protect passengers in a collision. A special rollover protection system features pop-up hoops behind the rear headrests that deploy automatically to prevent head injuries in some crashes. The usual suite of electronic stability aids, including antilock brakes and skid control, are standard.

Overall the 2011 Eos has much to offer in what is essentially a niche market. Pricing is ambitious (Komfort trims start at just over $32,000, and a loaded Lux tops out at over $42,000), yet the Eos offers a pleasing blend of style, capability, and luxury. While some might expect a more prestigious nameplate for that kind of dough, it’s important to remember that this is 2011, and a new Mercedes E-Class convertible starts at 56 grand, and that’s with a cloth top. At the bottom end of the range, Chrysler’s Sebring does have the origami metal top, but its rental-car interior and coarse drivetrain will have you wishing you shelled out the extra dough for the Eos.

What's your take on the 2011 Volkswagen Eos?

Have you driven a 2011 Volkswagen Eos?
Rank This Car