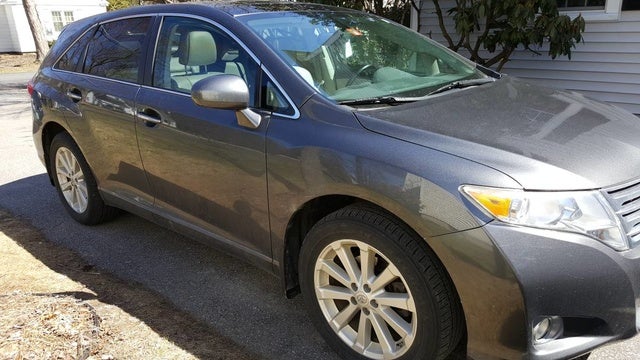 Some lackluster interior materials, uninspired acceleration from the standard 4-cylinder engine, noticeable wind and road noise and a lack of driving excitement might demand a few late nights at the automaker’s design center.

Generally well-regarded by reviewers and owners alike, the 2011 Toyota Venza is still a work in progress. Endowed as it is with a sleek exterior that may help change the perception of Toyota as staid and boring, this hefty crossover, alas, still has a ways to go toward interior perfection. Scads of cargo and passenger room, however, as well as the vigorous V6 and better-than-average safety scores make the Venza a family automobile worth considering.

Often called a true crossover, the 2011 Toyota Venza packs a lot of utility, punch and panache into a well-wrought package. Riding on the Camry chassis, this five-passenger, 4-door midsize mini-ute handles nearly as well as a sedan, though its 19- and 20-inch wheels appear a bit out of kilter compared to its otherwise slick look. Cargo room, however, is almost Highlander-esque at 34.4 cubic feet behind the rear seat and a sizeable 70.1 cubic feet with the rear seats folded. A Camry-like curb height keeps the Venza easy-in/easy-out, but seats are high enough for 360 degrees of tolerably unimpeded visibility. In an interesting touch, the rear seats rise a couple of inches higher than the front, enough that those nervous backseat drivers will rest assured that all’s well out there. Easy to maneuver in city traffic and crowded parking lots, this snazzy crossover fits the family image perfectly.

Though the 2011 Venza is little changed from its 2010 variant, there is one concession that Toyota installed in the latest version that reflects the automaker’s concern with its recent safety imbroglio. A new brake override system automatically kicks in to stop the vehicle if the accelerator sticks. Though the Venza was not implicated in the issue of sticking accelerator pedals, the company has wisely decided to install this valuable safety equipment in nearly all its vehicles this model year. Additionally for 2011, a USB connection jumps from an option to standard equipment.

Available in only a single Base trim, the 2011 Venza can be delivered with the choice of an economical inline 4-cylinder (I4) engine or a potent V6 powerplant (the Venza Base V6). Full-time all-wheel drive (AWD), using Toyota’s exclusive electronically controlled Active Torque Control, is also available with either engine. Finally, both the Base and Base V6 are delivered with alloy wheels, making an already good-looking crossover even more handsome.

The closest direct competitor to Toyota’s spiffy crossover is Honda’s odd-looking Accord Crosstour. Though competent enough, Honda’s entry lacks the Venza’s cargo-carrying abilities, with an exterior that looks positively bizarre in comparison. Other, less unique, rivals to the Venza include the Ford Edge, Nissan Murano, Subaru Outback wagon and Chevy Equinox, not to mention Toyota’s own RAV4. 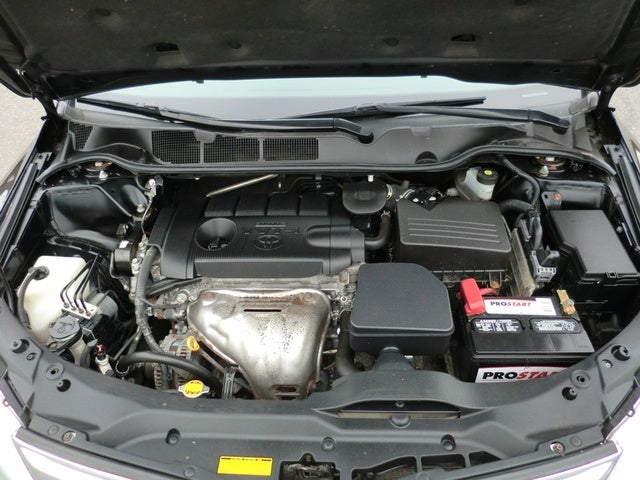 In its most essential configuration, the 2011 Venza carries a 2.7-liter I4 mated with a standard 6-speed shiftable automatic transmission with brake hill holder. This combo will put out a solid 182 hp and 182 lb-ft of torque, good enough to tow 2,500 pounds of trailer, with the optional hitch, wiring and Tow Package installed. With the four-banger’s variable valve timing (VVT), mileage is estimated at 21 mpg city/27 highway in the standard front-wheel-drive (FWD) configuration and 20/25 with available AWD. The available full-time AWD system is managed by a mechanical limited-slip center differential that sends power to all four wheels all the time, with electronic monitoring providing added torque from the wheels that slip to the wheels that grip in slippery conditions.

Available to the 2011 Venza is a 268-hp V6, also with VVT, that once more mates with the 6-speed shiftable automatic (again with the brake hill holder) for 246 lb-ft of torque. Towing capacity jumps to 3,500 pounds, with the proper equipment, and mileage slumps a bit to 19/26 in the FWD trim and 18/25 in the AWD version.

Reviewers describe both engines as competent enough, though the V6 is obviously the better choice for a little more zoom on the highway. The I4 is also noted to be a tad overmatched on steeper grades, but should do fine in mostly city driving. Tests of the I4-equipped FWD Venza found 0-60 times averaging 9.3 seconds, with the Venza V6 AWD jumping from 0-60 in an impressive 6.9 seconds. The 6-speed shiftable automatic is seen by most reviewers as silky and responsive, though virtually all mention that it works considerably harder with the four-banger than with the V6. A few reviewers find both engines a tad noisy on acceleration, with the V6 eventually sounding a more refined, not to mention softer, note at highway speeds.

The 19- and 20-inch wheels, standard with the 2011 Venza Base I4 and V6, respectively, have been little appreciated by the majority of reviewers. Despite a 4-wheel independent suspension, MacPherson front struts, front and rear stabilizer bars and a multi-link rear suspension, an unnecessarily harsh ride is common to this otherwise competent crossover due almost solely to its overbearing wheel sizes. Several reviewers comment that smaller bumps and road imperfections are noticeable, with larger bumps giving the Venza a thorough jolt. All maintain, however, that the ride is not overly affected, though owners may wince now and then when traversing winter’s potholes.

As is traditional with the car-based crossover breed, handling and steering capabilities with the 2011 Venza are more sedan-like than truck-like. Though not as nimble as its Camry cousins, this hearty cruiser handles most steering chores with surprising aplomb, according to the majority of reviewers. There is a tendency toward body lean in tight, fast turns, but otherwise reviewers say the Venza never feels as overbearing as its size might suggest.

Brakes in the 2011 Venza seem a matter of opinion among reviewers, with some maintaining that stops are powerful and glitch-free, while others are of the opinion that a bit of sponginess is apparent in the brake pedal, even under normal braking conditions.

With things like standard alloy wheels and a rear spoiler, it figures that the 2011 Venza is going to come with a good number of the traditional bells and whistles. Cloth upholstery, an eight-way power-adjustable driver’s seat with power lumbar support, and split-folding rear seats with a storage-capable center armrest are just the beginning of the list of goodies delivered with this slinky semi-ute. Remote power door locks, power windows and mirrors, telescoping tilt-wheel steering, cruise control and dual-zone climate control are also standard, as is a universal remote garage door opener. Simulated carbon-fiber accents and trim pieces on the dash, doors, center console and shifter knob give the cabin a touch of class, while the steering wheel mounts convenient cruise and audio controls. An electrochromatic rear-view mirror provides a further touch of posh, and entertainment is via a single-CD player with six speakers, XM satellite radio, auxiliary iPod integration and a USB connection. Finally, the 2011 Venza is prewired for a mobile phone installation that will use standard Bluetooth hands-free technology to provide convenient communications capability.

Options packages available with the 2011 Venza are varied and comprehensive, but leave little room to mix and match. First, there’s the Convenience Package with a power liftgate, as well as the popular Smart Key system that includes push-button start. Then there’s the Leather Package, featuring, of course, leather upholstery, wood-grain inserts in doors and console, a leather-trimmed steering wheel and a leather-trimmed shifter knob. The Security Package, meantime, offers a rear-view camera, and the Comfort Package shows heated, power-adjustable front seats and heated outside mirrors. Two Premium Packages combine many of the standalone options with equipment from other packages. Finally, a Tow Prep Package includes an engine-oil cooler, larger engine fan and a heavy-duty alternator. A trailer hitch and wiring are, as is common, dealer-installed accessories.

Though a number of reviewers faintly praise the 2011 Venza’s cabin ergonomics, an over-abundance of hard plastics, as well as some lack of imagination in choosing controls, buttons and dials turns more than a few off, no pun intented. Controls are, however, generally described as well-marked and easy to reach from all angles. The cloth upholstery draws hesitant nods from reviewers, but all recommend the available leather upholstery for a touch of true posh. Cabin storage is more than adequate, according to many reviews, but several mention some shoddy workmanship in assembly, with gaps and misalignments marring an otherwise acceptable interior. All reviewers agree that this upstanding crossover’s ample head- and legroom, in both front and rear seats, is a direct result of its hatchback-style lines. Visibility is noted by virtually all reviewers as good, though thick roof pillars in the rear can block the line of sight to each quarter.

The Insurance Institute for Highway Safety, meanwhile, has the 2011 Venza as one of its Top Safety Picks, giving this hefty ute its best grade of Good in frontal-offset-impact testing, side-impact testing and roof-strength tests.

Tepid-to-downright poor interior fit and finish, not to mention some low-rent cabin materials top the list of owner complaints about the 2011 Venza. Overly audible road and wind noise also irks owners, as does the harsh ride compliments of the 19- and 20-inch tires. There is, additionally, some grumblings about engine noise, especially with the I4, as well as a few grumbles about lusterless gas mileage in the V6 trim. Finally, the Venza’s somewhat steep initial cost, combined with its rather pricy options and packages, leave a number of owners vaguely irked.

Passenger and cargo room, however, is why most people purchase the Venza, and on that score virtually all owners agree that this crossover meets and often exceeds expectations. Acceleration with the V6 is also praised, as is the fuel economy of the I4 powerplant. Toyota reliability, ease of maneuvering and comfy seats all receive high marks from owners, as does the Venza's exterior styling. Finally, the Venza’s boatload of standard features brings kudos from nearly every owner to the extent that the word “value” is occasionally tossed around.

Have you driven a 2011 Toyota Venza?
Rank This Car

Dealer says all lug nuts are “swollen and stripped” and need replaced. I’ve worked on cars for 60+ years and never heard of this. FACT or SCAM?

Rear Tailgate Intermittently Cycles How Do I Recycle

when closed by remote or button rear hatch cycles halfway then reopens. Is there a reprogram cycle?

Hi, I Try To Post My Car For Sale But My Car Did Not Post On Carugus Yet, P...

Are There SUV/Car With V6, AWD, Not Huge

We are empty nesters looking to replace well-used 5 passenger 4x4 SUV with smaller vehicle coming off lease. What 5 passenger vehicles made in last 4 years offer a V6, AWD, preferably SUV or comparab...