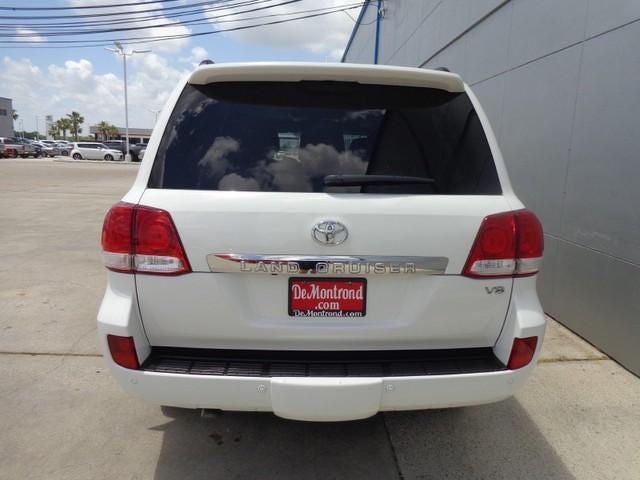 Average user score
4.5 ⁄ 5 stars
Based on 10 reviews
Reliable Stylish Suv by Jasonloyd — Toyota 4Runner has been great. Love the styling. Very minimal maintenance cost. Ride is comfortable in town and on the highway. Could use a little more power and better gas mileage, but I guess yo... Read more
Review by Anamgul786 — Its strong, reliable, perfect and smooth ride,relax drive, excellent Read more
Worthy by Robert — Great style and comfort. The newer V6 is far more fuel efficient than its predecessor. The tailgate does not have a push button assist which would be a plus. Also, the SR5 model requires adding a... Read more

Plenty of off-road capability is a distinction of the 2011 Toyota 4Runner, as are a competent ride, an efficient V6, available third-row seating, commanding looks, and a plethora of cargo space.

The 2011 4Runner's lack of a V8 powerplant, as well as iffy handling, a hefty pricetag, cramped third-row seat, and a heavy-handed stability control system might make a few tire kickers cringe.

As a trail beater, the 2011 Toyota 4Runner has few equals. For a more comfortable commute or shopping excursion, however, a crossover, with a more sedan-like ride, might be a better choice.

Now in its fifth iteration, the 2011 Toyota 4Runner still more than holds its own among the off-road set. This doesn’t mean, though, that it can’t be used for the occasional commute to work or trip to the mall, especially on wintry days when traction and visibility are both challenged. Be advised, however, that this midsize five-passenger SUV is a body-on-frame construct, thus ride comfort and handling, though better than previous generations, still leave much to be desired. Of course, said rugged ride and over-friendly steering can be useful when venturing off-road, where this sport ute once again lives up to its legendary trail-breaking reputation. And all trims even come with an extensive list of standard creature comforts that belie its masculine good looks, while an available third-row seat provides seven-passenger capacity in a couple of trims. Bottom line, however, is that the better choice for mall-crawling and commuting would be almost any crossover ute, including Toyota’s own Highlander.

Apparently, Toyota realized its error in equipping previous trims with an underachieving inline four-cylinder engine and has dropped this inefficient powerplant for 2011. A few minor modifications in standalone options and packages, such as a sliding cargo deck, a cargo organizer, and a new brake-override system now come standard in all trims.

Again in 2011 the 4Runner is offered in three trim levels, the base SR5, the off-road-capable Trail, and the feature-laden Limited. The SR5 and Limited trims are available in rear-wheel-drive (RWD) configuration or with full-time or on-demand part-time four-wheel drive (4WD), while the Trail comes in 4WD only. All trims, meanwhile, boast a roof rack, power retractable rear liftgate window, integrated rear spoiler, skid plates, and an integrated trailer hitch with four- and seven-pin wiring harness. Additionally, all three trims can carry up to 89.7 cubic feet of cargo, with the split-folding rear seats lying admirably flat.

The 4Runner’s competition in its somewhat limited market includes the Jeep Grand Cherokee and Wrangler, Ford Explorer, Dodge Durango, and Nissan Pathfinder, all more than capable of roaming mountain trails and rock-strewn gullies, but none overly nimble or particularly comfortable on the highway. Thus, for those with a taste for the road less travelled, it comes down to a question of value and, to a lesser extent, brand loyalty. A base price of about $27,300 makes Toyota’s midsize sport ute an expensive proposition, but doubtless worth the money when facing a rock-strewn gully or snow-covered mountain. 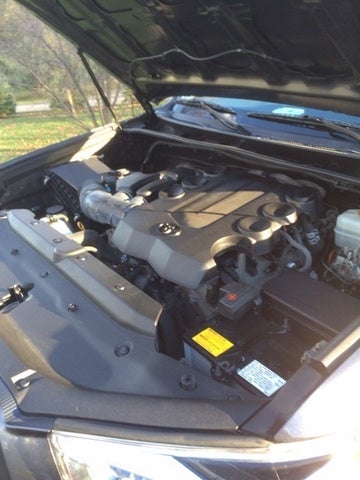 With the deletion of its anemic four-banger for 2011, the 4Runner now runs strong with the surprisingly potent 4.0-liter V6 carried over from 2010. An electronically controlled five-speed auto-manual transmission, with intelligence, brake hill holder, and rear limited-slip differential (ECT-i) allows this peppy powerplant to put out 270 hp at 5,600 rpm and 278 lb-ft of torque at 4,400 rpm, while Dual Independent Variable Valve Timing, again with intelligence (VVT-i) ensures 17/23 mpg in RWD trims and 17/22 for 4WD versions. With the standard integrated tow hitch, the 4Runner is limited to a mere 5,000 pounds of trailer capacity, thus damping its effectiveness as an all-around workhorse.

Reviews of the V6 are, for the most part, positive, with most claiming better-than-adequate power for any driving situation. In 0-60 mph testing, results for the six-banger range from 7.2 to 7.8 seconds, depending on drivetrain, which is about average for this type of vehicle, and all trims feature an “Eco” mode for what a few reviewers describe as marginally improved fuel economy. This gas-saving item will dull transmission and throttle response a bit when engaged, according to several reviewers, but acceleration improves when driving with the Eco mode disengaged. The standard five-speed auto-manual transmission is otherwise smooth and accurate, according to most reviews. Though a number of professional reviewers find the six-banger somewhat coarse-sounding under heavy acceleration, all note that it settles down considerably at cruising speed.

For 2011, all 4Runner trims come equipped with a double-wishbone front independent suspension, front and rear stabilizer bar, and solid live axle rear suspension. Complementing this standard suspension are 17-inch, six-spoke alloy wheels on the SR5 and Trail trim levels, with the high-end Limited flashing 20-inch, six-spoke alloy wheels. All trims roll on standard all-season radials, while the Trail is additionally equipped with standard skid plates and can be delivered with available all-terrain tires.

An added option for the Trail is Toyota’s highly touted Kinetic Dynamic Suspension System, which will disconnect the front and rear stabilizer bars to allow better wheel articulation on tougher bushwhacking expeditions when speed is kept under 40 mph. The Limited, meanwhile, is available with the X-REAS Sport Enhancement Suspension system that’s claimed to tone down the bumps and road irregularities in high-speed cornering.

Most reviewers generally deplore the 4Runner’s over-friendly steering and exaggerated body lean over the typical back road or on the highway, though many concede that this feathery feel is a boon in maneuvering tight parking spaces and navigating rough terrain. Though generally composed, with most bumps and abrasions well-modulated, according to some reviews, this rugged ute suffers what many reviewers note as a good bit of wallow on uneven highways, with a few reviewers annoyed by a disconcerting side-to-side motion. Braking seems a matter of some difference of opinion among reviewers, with many claiming sluggish pedal performance and a propensity for this heavy SUV to nosedive even in moderate braking, while others laud its powerful disc brakes and claim no unanticipated anomalies. Stopping distance from 60 mph is noted in one road test to be 122 feet, about average for this type of vehicle.

Options include third-row seating in the SR5 and Limited trims (with both offering a leather-upholstered version), as well as a slide-out cargo deck with under-deck storage that’s available with all three trims. The SR5 gains virtually all of the standard features found on the higher trim levels as options, while the Trail and Limited trims can be delivered with an available voice-activated DVD navigation system.

Though there’s plenty of hard plastic in the 2011 4Runner, it doesn’t come across as particularly low rent, according to most reviews. Gauges are simple and easy to discern, though a few of the audio and air conditioning controls are noted by a few reviewers as being a tad inconveniently placed. Nearly all reviewers note that the 4Runner’s seats feel comfortable and supportive, even on longer trips, while passenger room and cabin storage is described by most as among the best in its class. A high stance, meantime, presents some pressing issues to those who are vertically challenged, many of whom may not want to shell out extra money for available step running boards.

The National Highway Traffic Safety Administration (NHTSA) gives the 2011 4Runner three stars in rollover testing for both RWD and 4WD versions, but has no data on impact testing as yet. In 2010 the NHTSA gave the essentially identical 4Runner trims five stars, their highest rating, in front impact testing on the driver’s side, as well as for both driver and passenger side test results. Front impact testing on the passenger side garnered four stars in 2010. It should be noted that the NHTSA has since re-designed testing methods and recording of test data to better judge vehicle crashworthiness.

The Insurance Institute for Highway Safety, meanwhile, gives the 2011 4Runner its highest rating of Good in front and side impact testing, while awarding its second-highest rating of Acceptable in roof strength/rollover tests.

For 2011, owners can’t help but wonder why Toyota has yet to invest its rough-and-ready 4Runner with V8 power. Most owners additionally complain that this body-on-frame SUV rides and handles like a truck, therefore begging the question. Further owner grousing encompasses the 4Runner’s hefty pricetag, third-row seat comfort, expensive options available to the SR5, lackluster standard tires, and lack of standard running boards.

From those owners who enjoy or need to manhandle their way up and down mountains, or whose destination is by way of the deep backwoods, the 4Runner garners nothing but kudos. Build quality, cargo space, V6 fuel efficiency, and plenty of standard cabin comforts also make the list of owner plaudits. And finally, there’s that aggressive stance, not to mention those rugged good looks that several owners admit lured them into the showroom right from the get-go.

john Overpriced and over rated. An expensive turd is still a turd.

Users ranked 2011 Toyota 4Runner against other cars which they drove/owned. Each ranking was based on 9 categories. Here is the summary of top rankings.

Have you driven a 2011 Toyota 4Runner?
Rank This Car

Driver's Side Brake Light Went Out.. And I Replaced The Bulb And That Didn'...

brake light went out and i replaced it. it worked for less than 24 hours. what would be the next thing to replace? the socket that the bulb goes in?

Why Does The Red Light (on Star?) Come On Periodically And Reguarly?

Can A Tire Pressure Sensor Be Damaged When Balancing And Rotating Tires?

Location Of Oil Filter On Toyo

When Having The Maintenace Done Do You Really Need The Added Conditioner An...

Do you need all the added extra's(Oil conditioner, etc..) when having the maintenance performed or is the normal service fine.