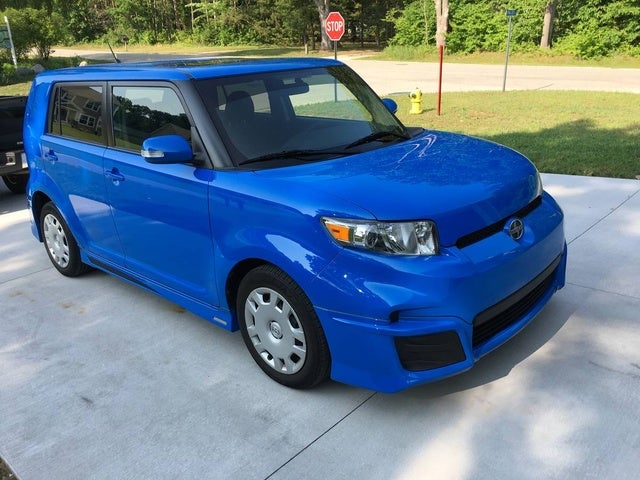 The 2011 xB's distinct looks aren’t for everyone, nor are its tepid mileage, poor rear visibility, bargain-basement interior materials, or still-confounding controls and gauges.

While it’s true that the xB’s shape has pretty much run out of cool, it’s still a pleasantly eccentric alternative to blasé crossovers, cramped sedans, and overbearing SUVs. A plethora of cabin space and cargo area, as well as city-friendly maneuverability and an almost kickin' driving experience ought to keep this rolling cubicle in taxi stands and driveways at least for the foreseeable future.

Still a refrigerator box on wheels, the 2011 Scion xB has, nonetheless, undergone a bit of modification inside and out. Apparently Toyota, Scion’s parent company, faced with declining interest from younger drivers, elected to give this five-door, five-passenger wagon a more wolfish demeanor with a new front end design, as well as some considerable tweaking to the rear. Perhaps the most noticeable exterior change is a return to the jutting front bumper of the original design. Interior upgrades include a new, if not necessarily improved, dash and control layout, larger, more compatible armrests, a telescoping steering wheel, and passenger-friendly seats. The unique xB, once a symbol of way-cool transportation decision-making, is now merely spacious and reliable, though a tad rough on the fuel budget.

Only one trim level is available for the 2011 xB, with, therefore, the traditional single engine choice. Gone for the 2011 model year is the oddly named Release trim level. Additionally, there’s no all-wheel-drive folderol to dull the thrill and the challenge of tooling this front-wheel-drive-only wagon through snow and mud – especially in a brisk crosswind, where its aerodynamically challenged profile can be a true measure of eye-hand-steering-wheel coordination.

Though it broke trail for the Nissan Cube and Kia Soul, the xB is now the most expensive boxcar of the bunch and finds itself struggling to keep up, innovation-wise. In any case, for those who enjoy wearing a top hat while tooling around town or desire a vertically accommodating cargo area, boxes on wheels like the xB fit the bill nicely.

Standing pat with its sprightly 2.4-liter inline four-cylinder (I4) engine and standard five-speed manual transmission, the 2011 Scion xB puts out 158 hp at 6,000 rpm and 162 lb-ft of torque at 4,000 rpm. A four-speed auto-manual transmission is also available for an extra grand. Even with variable valve timing (VVT), the xB is a gluttonous little guy, with the EPA rating it at 22/28 mpg with either transmission. To add insult to injury, one review claims only a 20 mpg average with the auto-manual transmission.

The 2011 xB is noted as reasonably quick off the line, with one performance test claiming 0-60 in 8.6 seconds in an auto-manual-equipped version. Passing power, however, leaves a bit to be desired, with various reviews claiming a lackluster downshift from the auto-manual at highway speeds and a herky-jerky aspect to the manual transmission that detracts significantly from the overall driving experience.

With 16-inch steel wheels standard, the 2011 Scion xB doesn’t exactly glide over rough roads, but according to most reviewers, it takes smaller bumps in stride, while larger ones will give occupants a jolt or two. Additionally, 17-, 18-, or 19-inch alloy wheels are available for the xB, though data on ride improvement with the larger tires is scarce.

At highway speeds, the xB feels tolerably stable and controlled, according to most reviews, with its MacPherson front struts often mitigating what several reviewers claim is a somewhat vague steering feel. A front independent suspension and front stabilizer bars, along with a rear torsion beam suspension, allow for excellent low-speed maneuverability, as noted by most reviewers, but that pesky cube shape means a somewhat top-heavy sway and lean in tight corners when taken at a gallop. Also, its generously sheer silhouette means the xB can be a bit tricky to keep on the straight and narrow in even moderate crosswinds.

All in all, handling characteristics for this compact wagon are described by virtually all reviewers as better-than-adequate for around town, a bit less so out on the highway in certain conditions. Brakes are noted as powerful and true in all situations.

Not to be overlooked is the xB’s list of options, which includes the Scion touch-screen navigation system and rear-seat DVD entertainment. An Alpine audio system with a subwoofer and XM satellite radio, rear-view camera, and DVD navigation capability, as well as enough add-on music gizmos to satisfy the most melodic of passengers, is an especially valued add-on. Finally, a TRD sport muffler, rear spoiler, and foglight kit are available for a sportier exterior appearance.

Reviewers seem generally unimpressed with the xB’s reworked interior, complaining that some controls and gauges are still illogically placed, therefore difficult to read and locate. New seats are a tad more comfortable, and armrests have been bulked up and relocated, but most reviews complain that both need more work. Furthermore, oversized rear roof pillars continue to plague drivers with visibility problems. Passenger space, however, remains impressive, while 21.7 cubic feet of cargo area (with the rear seats folded) is always appreciated.

A vehicle that is designed to appeal to younger drivers is, by nature, scrutinized for safety concerns. The 2011 Scion xB is no exception, and comes through with such standard passenger protection equipment as four-wheel disc ABS with electronic brakeforce distribution and emergency braking assist, dual front side-mounted airbags, front and rear head airbags, and turn-signal-integrated mirrors. Optional across the lineup is a remote anti-theft alarm.

While no test data is available from the National Highway Traffic Safety Administration (NHTSA), the Insurance Institute for Highway Safety gives the 2011 xB its highest rating of Good across the board. In fact, the IIHS rates this sturdy wagon a Top Safety Pick for 2010-2011.

Though owner appreciation of the 2011 xB runs more toward its practical aspects than its hip factor these days, a certain personality is nevertheless noted as a positive. Rumbles of discontent, however, can be discerned for a number of unappreciated aspects of its latest exterior makeover, including what many owners perceive as a downright ugly rear end. Apparently, the xB’s looks will always be subjective.

Fuel efficiency is understandably on the list of owner gripes, as is a still-apparent lack of serious punch in the gas pedal. Both transmissions also come in for a number of owner complaints, with the five-speed manual cited for lack of a sixth gear and the four-speed auto-manual disparaged for needing an extra gear or two.

Controversial looks aside, owners laud the xB’s passenger and cargo room, safety, and driving kick, with the improved cabin ambiance, including somewhat more comfy seats and armrests, also coming in for a share of guarded owner optimism. The standard Pioneer audio is universally praised, while the available Alpine system is placed in a class by itself in the eyes of virtually all owners. Altogether, the 2011 xB gets kudos for value and reliability, while the jury’s still out regarding its restyled curb appeal.

dickscion Happy overall with vehicle. Not sure if the oil burning issue still applies to the 2011 model or if Toyota/Scion fixed it. TSB only states 2008-2009

I just had new front struts put on but now its making a loud squealing/screeching sort of sound when I turn my steering wheel and even just regular driving down road...please help with any ideas o...