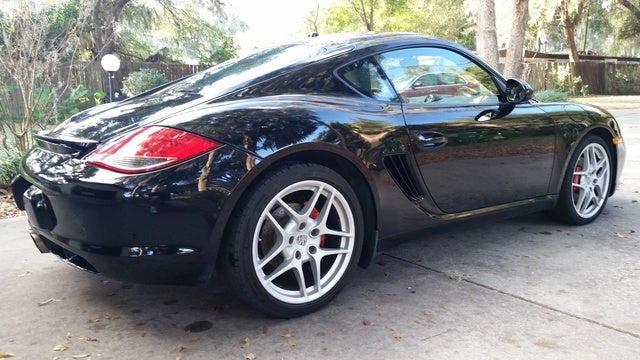 With a new trim this year for the venerable Cayman, a lot of 911 owners will be quite upset. Porsche has always been protective of its favorite son the 911, making sure it remained firmly at the top of the heap. Things change with the new Cayman R this year with its 330-hp, 3.4-liter boxer 6 engine – that’s a 10-hp bump over the 3.4 in the previous top Cayman, the S.

Were it just an extra 10 horses, the 911 would have nary a worry, but far be it from Porsche to make a small, simple change like that. No, the Cayman R follows the same recipe as the Boxster Spyder, which understood that the best way to maximize horsepower gained is with pounds lost.

That means taking the already quick Cayman S and adding aluminum, carbon fiber and lighter, 19-inch wheels. That means chucking the air conditioning, the stereo and even the door handles, all in the name of trimming the fat, and adding lighter sport seats and steering wheel to do the same. The result is over 120 pounds of weight savings and a car that handles better than anything that isn’t on rails has a right to. That’s partially due to weight saved – especially at those all-so-important corners – and partially because Porsche wasn’t done yet. The Cayman R gets a 20mm drop in the suspension, a standard limited-slip diff, and new front and rear spoilers for improved aerodynamics in a car that really wasn’t begging for better aerodynamics.

And if you thought the transformation with the Boxster Spyder was dramatic, just imagine what the same treatment will do to the Cayman R, which doesn’t suffer from the penalties of going topless. It all adds up to a midengine monster that will do the sprint to 60 in 4.7 seconds – exactly the same as the 911 Carrera and for significantly less money.
Get ready for the whining to commence. Sure, I’m pitting the top-tier Cayman trim against the entry-level 911, but I’d rather have the Cayman and the extra pocket change anyway – pocket change that could buy your kid a brand-new economy hatchback.

Porsche didn’t leave the Cayman and Cayman S trims alone this year either, both getting fitted with Bluetooth and an iPod interface as standard features. Otherwise, they stay the same with their 2.9- and 3.4-liter boxer 6 engines putting out 265 and 320 hp, respectively. However, knowing their big brother can suddenly embarrass at least one of their 911 stablemates at will, even the lowlier Caymans get a bit more confidence this year, and confidence is sexy.

What's your take on the 2011 Porsche Cayman?

Have you driven a 2011 Porsche Cayman?
Rank This Car

Website Does Not Reflect Latest Asking Price On My Car For Sale?

I changed the price and your website did NOT change the price. How do you update price on a car for sale?

I Have One Listing Under GuruFKPK9, How Did I Go From FAIR PRICE To HIGH PR...

I have one listing under guruFKPK9, How did I go from FAIR PRICE to HIGH PRICE??

How Are You Affiliated With Craig Tierney Of Autopay? He Has Been Working A...

How are you affiliated with Craig Tierney of Autopay? He has been working a transaction for the sale of my car and I have no idea if he is affiliated with Car Gurus. He has access to wire transfer and...

I Changed The Battery In My 2011 Cayman S And Cannot Figure Out How To Rese...

I have been trying to reach Cameron who is selling a Porsche cayman base 2011 for 36000. The car is in Kendallville, In. he has not received or has not responded to my emails on your cite. please help...