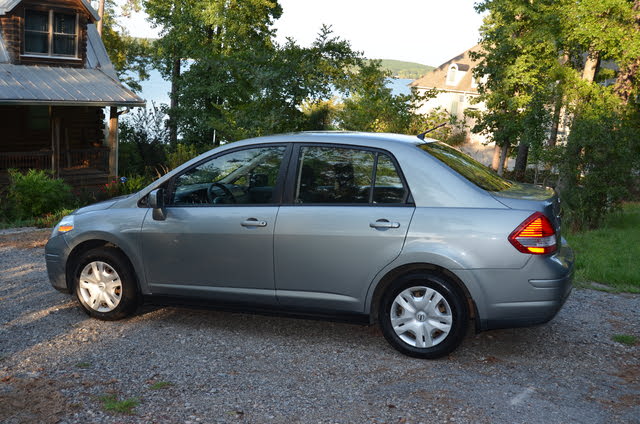 The 2011 Nissan Versa offers style and comfort above and beyond what's expected in a subcompact.

Consumers are quickly losing patience with engines that fail to impress with either power, play, or fuel economy – and the Versa comes up short with all three in both underpowered 1.6- and 1.8-liter engines.

Yes, you get what you pay for, and the Versa is still one of the best values on the road. The trouble is it’s not going to stay that way, as more and more manufacturers crack 30 mpg and do so with engines that are both refined in composure and deliberate in execution. At this point, the Versa stands as one of the best subcompacts available, but don’t be surprised at changes coming soon.

After receiving a new grille for 2010, the Nissan Versa sees few changes for 2011, namely the inclusion of standard and available antilock brakes for the 1.6 and 1.6 Base trims, respectively. Otherwise this four-door hatchback or sedan remains virtually identical to the 2010, with the same 1.6 Base, 1.6, S, and SL trim lineup offering the option of two four-cylinder engines and four different transmissions, depending on trim.

The Versa is Nissan’s entry-level car, and at times has been the least expensive new car in the United States, although competitors are eager to steal that title, if only by a handful of dollars. Regardless, the Versa remains a well-equipped subcompact, seemingly aiming to change attitudes about what it means to be an economy car.

Unfortunately, there’s little good to be said about the drivetrain options in the Versa. Neither the 1.6-liter nor the 1.8-liter engine is a poor example of engineering, it’s just that neither goes far enough. 1.6 Base and 1.6 trims are predictably powered by the 1.6-liter, four-cylinder engine that produces a measly 107 horsepower. Both the 1.6 Base and 1.6 come standard with a five-speed manual transmission that does little to increase the liveliness of the underpowered powerplant, while the 1.6 additionally gets the option of a five-speed automatic which is similarly disappointing. With peak horsepower not showing up until 6,000 rpm, and peak torque of 111 lb-ft arriving only 1,400 rpm earlier, either transmission will have to swap gears with annoying frequency to stay anywhere near maximum power.

The 1.8-liter four-cylinder in the S and SL trims boasts an additional 15 hp arriving 800 rpm earlier, but its 127 lb-ft of torque shows up even later here, not presenting until 4,800 rpm. Neither the four-speed automatic nor the six-speed manual make up for this lack of necessary power, but the continuously variable transmission offered in the SL does make a difference. It also offers the best efficiency of the group, with an EPA-estimated 28/34 mpg, improving upon the four-speed’s 25/33 and the six-speed’s 26/31.

Sadly, both engines produce significant and unpleasant roar upon acceleration, a condition that doesn’t seem to result in any significant increase in power. For all these negatives, it would be hoped that either engine would produce better mileage.

This is perhaps one of the strong suits of the vehicle, as the Versa is produced on an elongated version of the Nissan B platform, giving it a longer wheelbase than most other vehicles in the class. While certainly not a sports car, the Versa offers agile if not impressive handling with a sufficiently taut suspension that combats lean and roll without imparting excessive harshness that is often found with cheaper chassis/suspension combinations.

The steering is especially refreshing at this level, with a neutral and crisp feel that allows impressive control from this subcompact. Its turning radius and overall diminutive dimensions contribute to ease of maneuvering, but the Versa is even fun to drive when approaching extra-legal speeds.

Seats, seats, seats. There’s actually a lot of good things to talk about in the cabin of the Versa, which is surprising for a subcompact, but it’s the seats that seem to get the bulk of attention. And deservedly so! The Versa can fit not just adults but larger adults both front and back, and its seats offer the kind of support and comfort that encourages both spirited driving and long-distance travel – two activities not usually undertaken in a subcompact.

This same care and attention seems to have spilled over to the rest of the interior as well, with gauges and controls that fail to radiate any semblance of the cheapness usually attributed to economy cars. Even the hard plastics found throughout the interior are textured and treated with a level of care that seems to evoke feelings of one step above what you’ve paid for. Small exceptions include a clunky voice-recognition interface that requires extremely slow and clear enunciation for proper execution, a distinct disadvantage in a vehicle whose engine, mirrors, and tires all produce a wealth of ambient noise at seemingly any speed.

Perhaps this is where the money was saved with the Versa. While a full list of safety features is available here, they aren’t standard across the vehicle lineup. Dual front, front-side, and curtain-side airbags come with every trim, as well as front-seat active head restraints, but the 1.6 Base trim doesn’t come standard with the antilock brakes and brake assist included in the rest of the trims. And if traction control or an antiskid system interests you, it’s not standard until the top-tier SL trim.

Still, NHTSA tests show a four-star rating in all categories for the Versa, and antilock brakes at least are available on the 1.6 Base, even if antiskid is not.

Overall, owners feel they’re getting quite a deal for a car with a base price under $10,000 – and they’re correct. With exceptionally comfortable seating and a more than competent suspension, owners know they aren’t going to get a powerhouse here. Still, the Versa’s 1.6 and 1.8-liter engines disappoint all but the most patient passengers.

Users ranked 2011 Nissan Versa against other cars which they drove/owned. Each ranking was based on 9 categories. Here is the summary of top rankings.

Have you driven a 2011 Nissan Versa?
Rank This Car

I have a 2011 Nissan Versa Hatchback Manual Transmission. I have over 145,000 miles on it. Since I have followed all manufactured service and oil changes, how many miles can I expect to get from t...

What Type Of Battery For A 2011 Nissan Versa

I just bought a new battery because my old one died. I had a hard time finding what was recommended in the firsts place, which was a 51R, I went to several places and they all said the 51R was what I ...

I have a manuel 2011 nessan versa hatchback when I turn the key all the light lite up but when I press and the clutch and turn the key the car won't start iv replace the clutch switch and the igni...

Why Will My Car Not Start?

I have a 2011 Nisan Versa S. I got in the car the other night after work and the key would not turn in the ignition switch. Also the steering wheel was not locked as it should be. I fought the switc...