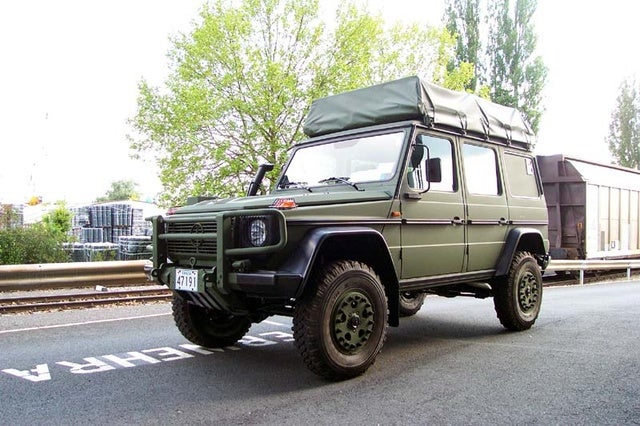 For those completely immune to sticker shock and seeking a luxury SUV able to dominate any terrain under its wheels, the 2011 Mercedes-Benz G-Class is worth a look. A carryover from 2010, the G-Class returns in two trims: the base G550 and the high-end G55 AMG (produced by the high-performance branch of the Mercedes Car Group). With an extensive list of standard features, Mercedes declares that the vehicles are “so well-equipped, no options need be offered,” and, indeed, no options or packages are available for either trim. While its off-road capabilities, solid German construction (hearkening back to its military origins), powerful V8, and long list of standard features are selling points for the SUV, poor fuel economy, a mind-blowing MSRP, and questionable handling may have even consumers with money to burn looking toward competitors such as Land Rover’s Range Rover.

But no one buys this SUV with “green” driving in mind. One of the clear strengths of the G-Class vehicles is their off-roading capabilities. The off-road features have not changed for this model year, and the G-Class trims should continue to climb every mountain and ford every stream with ease. 4MATIC permanent all-wheel drive is coordinated with a four-wheel Electronic Traction System (ETS). The ETS monitors wheel slip and distributes power to the wheels with the best grip, keeping the vehicle under control even, according to Mercedes, if only one wheel has traction. The all-wheel drive is accompanied by three driver-activated locking differentials (center, front, and rear). With an 8-inch ground clearance and more than 8 inches of wheel travel, Mercedes boasts that the G550 can climb an 80% grade (36 degrees of incline) and can master a 54% lateral slope (24 degrees of sideways tilt). The suspension is engineered with rigid front and rear axles with longitudinal and transverse links, coil springs, gas-pressurized shock absorbers, and a front stabilizer bar. An Electronic Stability Program reduces engine power while applying the brakes to individual wheels in the event of wheel spin, under- or oversteering to help maintain the intended direction of the car.

Although the G-Class SUVs handle well in off-road conditions, 2010 reviewers were not quite as kind to the steering and handling of the SUV in on-road situations, in part because of its exceedingly tall and boxy shape. Its top-heavy form gives the vehicle noticeable body lean, and the power recirculating ball steering was criticized as offering poor and slow response by some, particularly at high speeds.

Originally built for the military, the G-Class trims are designed with tall, flat sides, stainless steel running boards, a chrome front grille guard (G550), and a three-rib chrome grille emblazoned with the Mercedes-Benz star. The G550 rides on new standard twin five-spoke 18-inch alloy wheels, while the G55 comes with the AMG brand five-spoke alloy 19-inch wheels. Both trims offer a full-size spare mounted on the rear and protected by a chrome-trimmed cover. Other standard features include a power sunroof, power heated adjustable side-view mirrors (with integrated turn signals and puddle lamps), rain-sensing wipers, and deep-tinted privacy glass in the second-row and rear windows. Bi-Xenon high-intensity discharge (HID) headlights come complete with high-pressure, heated headlight washers. The two standard front corner-illuminating foglights are activated at slower speeds by turning the steering wheel or using turn signals. Shining toward the inside of a turn, the front foglights help to improve visibility. A rear foglight is also standard.

The interior of the 2010 G-Class received mixed reviews, with some finding luxury typical of a Mercedes, while others expected more comfort and refinement and less cabin noise at this price. The 2011 interior continues to be detailed with hand-polished real wood on the center floor console, instrument panel, shift knob, and leather/wood heated steering wheel (Burl Walnut trim for the G550 and Designo Natural Maple in the G55). Front dual-zone automatic climate control, with a dust and pollen filter, combine with a charcoal filter to eliminate odors. Front visibility has been called “panoramic,” and rear visibility is aided by both a rear park-assist system (using sensors in the rear bumper to alert the driver to objects in the rear with both audible and visual signals), and a standard rear-view camera, activated when the driver shifts into reverse, and projecting the image on an in-dash screen. In cold weather, visibility is aided by an electrically heated windshield, reducing the defrost time by eliminating the wait for the engine to heat up.

With room for five, the seats are covered in leather (Designo upgraded leather for the G55) with heated, cooled, and multi-adjustable power memory front seats and a 60/40-split rear bench seat (to increase rear cargo space to 79.5 cubic feet). Although last year’s reviews indicate that the front seats are firm but comfortable, the rear seats, unchanged in this year’s model, offered insufficient legroom and no rear center armrest.

The G-Class also provides standard SmartKey technology, which integrates remote locking and unlocking, as well as offering a programmable memory feature to recall up to three drivers’ preferred settings for the driver's seat, outside mirrors, and power tilt/telescopic steering wheel. The SmartKey can also open or close the windows and sunroof from outside the SUV.

Both trims come with a Harman Kardon HD AM/FM radio with LOGIC7 surround sound, twelve speakers, Sirius Satellite Radio, and a 6-CD changer, which can also play DVDs when the car is in park. MP3/iPod connectivity is accessible through a connection in the glovebox and can be controlled through the steering-wheel-mounted controls, the COMAND screen, or with the stereo controls. Music is also accessible with an in-dash SD memory card reader and a hard-drive Music Register system that can store up to 4GB of digital music, even offering the ability to copy music from CDs, DVDs, and other storage devices, saving them as MP3 files.

Although the 2010 G-Class was not tested by the NHTSA or the IIHS (not uncommon for vehicles in this price range), the G-Class trims do offer a number of standard safety features. Antilock brakes include brake assist and electronic stability and traction control, and the SUV provides eight-way airbag protection, including dual front airbags, dual front side-impact airbags, and window curtain airbags for front and rear seating.

The 2011 Mercedes-Benz G-Class is a luxury SUV that defines over-the-top. With a list of standard features that rejects even the suggestion of available options, off-road capabilities that would make a mountain goat proud, and V8 engines powerful enough to spring the behemoth vehicle into action, the G550 and G55 AMG have much to recommend them. However, poor fuel economy, sluggish handling, and pricetags not for the faint of heart may leave other choices, such as the Range Rover, more appealing for the luxury SUV consumer.

What's your take on the 2011 Mercedes-Benz G-Class?

Have you driven a 2011 Mercedes-Benz G-Class?
Rank This Car