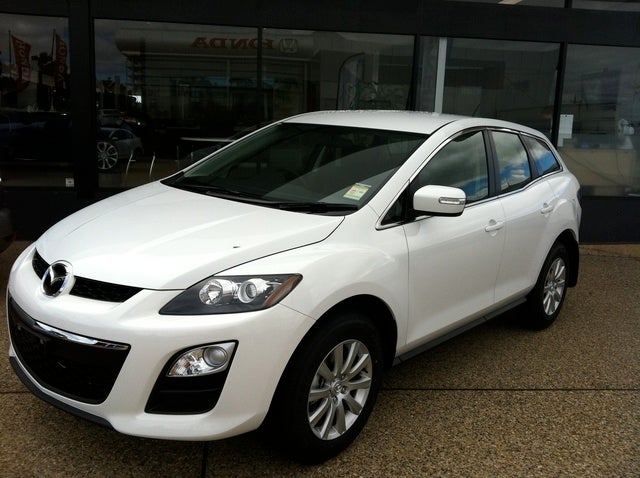 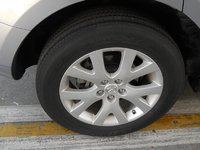 An overly firm ride, low-budget interior materials, limited cargo room, even with the rear seats folded, a cramped rear seat, and a distressing turbo lag in the s trims take their toll on the 2011 CX-7’s image.

If a kickin’ drive and good looks are what’s wanted in a crossover ute, the 2011 Mazda CX-7 might be worth a look. If passenger room, however, not to mention lots of cargo space and V6 performance are more important, look elsewhere.

Though endowed with good looks and sporty handling, the 2011 Mazda CR-7 compact crossover comes up a bit short in overall family friendliness. A snazzy exterior belies some cabin and cargo issues in this five-passenger CUV, such as a somewhat cramped second row and less cargo space (58.6 cubic feet with the rear seats folded) than most of its competitors. A naturally aspirated inline four-cylinder (I4) engine and five-speed shiftable automatic transmission is the standard powertrain for lower trims, while higher trims are equipped with a standard turbocharged I4 and its accompanying six-speed auto-manual transmission. No V6 engine is available, however, which leaves some reviewers scratching their heads at a towing capacity that’s maxed out at a mere 2,000 pounds, and at that, only when the optional Class II tow hitch and wiring package is selected. Nevertheless, with its traditional unibody construction, this compact crossover really does handle like a sedan, according to nearly all professional reviewers. After some fairly hefty upgrades in 2010, a new sub-trim is the only major change for the 2011 CX-7.

The 2011 CX-7 is available in four trim levels, the base i SV, lower-midlevel i Sport, second-tier Touring, and the top-shelf s Grand Touring. The Touring level is available in either the new-for-2011 i version carrying the base I4 powerplant, or in an s trim that features the turbocharged I4 engine. All trims are delivered with standard front-wheel drive (FWD), while turbocharged s trims are available with all-wheel-drive (AWD) capability courtesy of Mazda’s highly touted Active Torque Split AWD system. All trims come with a standard rear spoiler, front bucket seats, split-folding rear seats, and alloy wheels, while the higher trims additionally sport standard privacy glass and added instrumentation.

Volkswagen’s well-regarded Tiguan is the CX-7’s closest competition, though the Chevy Equinox, Honda CR-V, Subaru Forester, and Toyota RAV 4 are also traditional rivals. In sheer driving excitement, few can match Mazda’s cute ute, but its compromised rear-passenger comfort and space-challenged cargo capacity could lead many to forego the CX-7 in favor of something with a bit more utility. Price-wise, on the other hand, few can quibble at the excellent value offered by Mazda’s sporty compact crossover.

The CX-7’s "s" trims boast a 2.3-liter turbocharged I4 powerplant that’s managed by a standard six-speed transmission, again in the popular auto-manual configuration. Expect some 244 hp at 5,000 rpm and 258 lb-ft of torque at 2,500 rpm from this turbocharged four-banger, with gas mileage dropping to 18/24 in FWD trims and 17/21 in AWD versions. Towing capacity, however, jumps to some 2,000 pounds when properly equipped.

Reviewers find the base I4 barely adequate for highway driving, though certainly up to most chores around town. Fuel efficiency, of course, is this naturally aspirated four-banger’s stock in trade, while its standard five-speed auto-manual transmission is noted to be smooth and responsive.

The peppier turbocharged I4, on the other hand, is described by virtually all reviewers as handicapped by a distinct and often frustrating turbo lag on acceleration. Once it’s rolling, however, the turbo provides more than enough power for a kickin’ cruise, with a 0-60 time of about 8 seconds on average. Alas, the usual fuel-efficiency gremlin plagues the turbocharged CX-7 trims, as does the need for recommended premium gas. Additionally, the six-speed auto-manual transmission common to turbo-equipped s trims is best left in manual mode to somewhat mitigate that pesky turbo lag. Finally, turbocharged trims are available with an AWD that uses a mechanical center differential and center and rear limited-slip differentials to automatically transfer power from just the front wheels to both front and rear wheels for added traction in marginal conditions.

Finally, both engines are noted to be noisy on acceleration, with the base I4 sounding a bit coarse and the turbo emitting a disconcerting whine. Both, however, calm down to tolerable levels at cruising speeds.

If there’s one aspect where the 2011 CX-7 shines, it’s a downright sporty drive, though ride comfort suffers. A four-wheel independent suspension is complemented by front MacPherson struts and front and rear stabilizer bars, while a multi-link rear suspension completes the package. The i SV and i Sport trims, as well as the new i Touring, are delivered with standard 17-inch alloy wheels, with the s Touring sporting 18-inch alloy wheels and the s Grand Touring boasting 19-inch alloy wheels. All trims are described by reviewers as a tad too firm for a truly comfortable ride, with bumps poorly dampened, and wallow and jiggle both very noticeable. Wheel size, it’s also noted, seems not to exaggerate or mitigate these problems to any significant extent.

Steering, however, is universally described as tight, well-balanced, and user-friendly. Tight cornering results in little body roll or noseplow, according to reviewers, and a tight turning radius leads to confident maneuvering in city traffic and crowded parking lots. Braking, meanwhile, is described by virtually all reviewers as potent, true, and glitch-free. Altogether, reviewers find the CX-7 a blast to drive on the back roads and a pleasure to handle in town.

Though not quite up to some of the competition, features-wise, the 2011 CX-7 holds its own in cabin comforts for its price range. The base i SV boasts cloth upholstery, remote power door locks, power windows and mirrors, telescoping tilt-wheel steering with mounted audio and cruise controls, air conditioning, and simulated alloy dash and console trim accents. Entertainment is handled by a single-CD player with four speakers and MP3 audio input.

The i Sport adds a standard leather-wrapped steering wheel and shifter knob, as well as Bluetooth hands-free communications technology and phone pre-wiring, while both the i and s Touring trims throw in standard leather upholstery, heated front seats, and an 8-way power-adjustable driver’s seat.

Stand-alone options with the 2011 CX-7 include rear-seat DVD entertainment, Class II trailer hitch and wiring, and remote engine start, all available across the lineup. The i and s Touring trims, additionally, offer the available Convenience Package with power moonroof, rear-view camera, and automatic climate control. The s Grand Touring, meantime, is available with the Technology Package, which throws in a premium sound system and Sirius satellite radio.

Generally, reviewers are satisfied with the CX-7’s cabin amenities, finding them adequate for the price. A plethora of hard plastic surfaces, alas, comes with the territory, as does a rather cramped second row seat, though a number of reviewers compliment the ease with which the seatbacks can be folded. A racy dashboard pleases some reviewers, while others find it distracting, with indistinct gauges and ineffective back-lighting in certain conditions. Some buttons and controls are noted by reviewers to take a bit of getting used to, yet all agree that climate control buttons are large and distinct, while the s Grand Touring’s standard navigation system is noted as laudably simple to operate. Finally, reviews find cargo area behind the rear seats reasonably generous, but, with the rear seats folded, total cargo area in the CX-7 is smaller than that of most of its rivals.

Mazda has loaded the 2011 CX-7 with standard safety features. Four-wheel ABS with electronic brakeforce distribution and emergency braking assist, as well as traction and stability control, help keep this compact crossover safe on the road. Dual front side-mounted airbags, front and rear head curtain airbags, and a front head restraint whiplash protection system help to safeguard passengers from injury in an accident. Meanwhile, front fog/driving lights are an optional safeguard across the lineup. Both Touring trims, as befits their added status, add a standard remote anti-theft alarm, while the Grand Touring trim level includes standard HID headlights, turn-signal-integrated mirrors, and dusk-sensing headlights. Finally, the Grand Touring trims can be delivered with Mazda’s available Blind Spot Monitoring System, where traffic approaching on either side of the CX-7 is monitored by sensors and an alarm chimes when drivers attempt to change lanes.

The National Highway Traffic Safety Administration (NHTSA) has no data on the 2011 CX-7, but 2010’s numbers were five-star perfect in front and side impact testing, while rollover testing netted four stars in both FWD and AWD trims. The Insurance Institute for Highway Safety (IIHS), meanwhile, gives the 2011 CX-7 its best rating of Good in front and side impact protection, while roof strength gains only a Marginal, the Institute’s second lowest rating.

Among the most common owner complaints with the 2011 CX-7 are its frustrating turbo lag and pint-size cargo area. Further glitches, meanwhile, include the overabundance of tacky interior plastic, lackluster acceleration with the base I4 engine, a wallet-whacking thirst for gas on the part of the turbocharged I4, and a distracting noise level from both engines on heavy acceleration.

On the other hand, owner props go to Mazda’s snazzy mini-ute for its nimble handling characteristics and suave good looks, as well as the roomy and comfortable front seats, decent fuel economy with the base I4 engine, easily foldable rear seats, fairly large options selections, and reasonable base price. The power in the turbo I4 comes in for its share of kudos, as does its maneuverability in tight places.

Brian After just a month of ownership in 9/17, I'm pretty pleased since I have little to compare it to from personal experience with crossovers or mini-utes. The 2.4L has plenty of power in spite of the reviews, the front seats are a bit narrow, and MPGs aren't bad for a pre-Sky Activ engine unless you have a lead foot. This is not an economy car. Handling is great but made for comfy driving so don't expect sports car handling. Maintenance is very easy - I've done oil, plugs and tranny juice - easy with the right tools. Decent sound system for stock. I bought this as a 6-year-old used vehicle with 79k on the clock. Time will tell...

I Want To Sell My Car On CarGurus

How do i sell my car on CarGarus

Check Engine & Traction Control Lights On When It Rains

Check engine & traction control lights come on when it rains. Car will only dd 10 mph. Runs fine when it dries out.

599 views with 5 answers (last answer about a year ago)

I have the Sirius button on my dashboard to use Sirius, yet when I press it nothing happens, How do I access it? I am interested in purchasing Sirius.