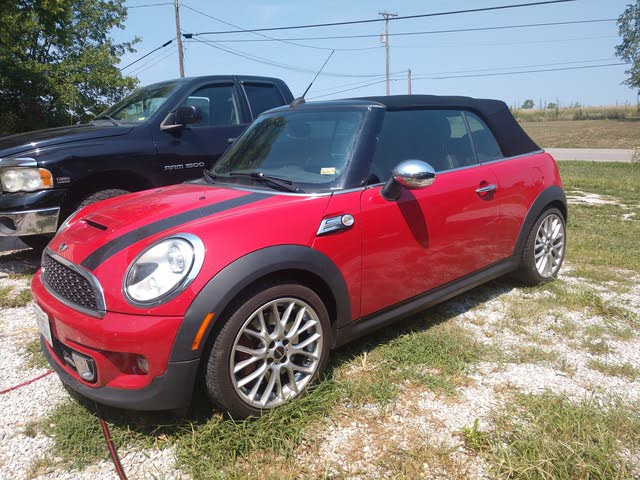 BMW seems reluctant to fuss much with the winning formula it's concocted with its new MINI, instead opting for small changes to keep its compact competitive. For 2012 that means a lot of little fixes and stylistic adjustments, including new trims and wheels, a revised front fascia, taller hood, bigger fog lights and redesigned taillights. There are also some new colors – Orange Spice, British Racing Green and Eclipse Grey - and the supercharged S gets some attention as well with new functional braking ducts and a unique front bumper.

Even the powertrains get a bit of a nudge, with reduced internal friction in the base 1.6-liter engine resulting in a 2-hp boost up to 121 and remapped variable valve timing giving the supercharged S a new output of 181 hp. The 6-speed manual transmission is still standard and still buttery-smooth to operate, but the laggy 6-speed automatic remains an option. Torque steer that has plagued the Cooper from the beginning has been addressed thanks to retuning of the electric steering, but is not gone.

Inside, there are more changes to be seen. As seems to be the trend with many manufacturers this year, chrome is fading away, replaced here by more black. The quirky, centrally located speedo is still here, however, and it’s getting less quirky and more annoying with age, but stereo controls have finally been relocated to a more convenient position. The stereo itself is still a bit underpowered, especially in the convertible, but the optional 10-speaker upgrade takes care of that nicely.

While the MINI has always been a nimble and agile performer, its stiff suspension has been known to get a bit taxing on the highway as the miles pile up. It’s not a major concern in the Base with its stock suspension and 15-inch wheels, but with the sport setup in the S and John Cooper Works versions, and the subsequent wheel size increases to 16 and 17 inches, the ride can get quite tiring. The standard run-flat tires on the S only exacerbate the issue and take a lot of fun out of the MINI, at least in the long term. Spirited jaunts around town are still invigorating, albeit less so on the pothole-strewn motorways of the snow belt than on glass-smooth southern surfaces.

The other ubiquitous complaint with the MINI has always been the noise, penetrating into the cabin via road and tires and wind. More insulation has been added this year, but long-term testing will be needed to really judge its effectiveness.

As the MINI gets on in years – and still looks much the same as it did upon its introduction – its charming appeal wanes, much like what happened with the new Beetle. That makes its high price seem ever higher in comparison. Changes here are welcome, but they don’t justify yet another price increase. This year, it’s around $700, which pushes the base MINI past the $20,000 mark, and with one or two clicks on the options list, the Works version easily crests thirty grand. If you want to keep us interested, give us more, don’t just charge us more.

Users ranked 2011 MINI Cooper against other cars which they drove/owned. Each ranking was based on 9 categories. Here is the summary of top rankings.

Have you driven a 2011 MINI Cooper?
Rank This Car

I Traded My Car In And Need To Take Down Ad How Do I Do This ??

does changing the front windshield in a 2011 mini cooper s affect any electrical wiring? We had our front windshield replaced and the next time we drove the car the drivers side electric window isn...

White Smoke From Exhaust After Idling For A Few Minutes

I have a 2011 Mini Cooper S, I purchased it with around 77k miles on it a few months ago. When the car stays still and idles for a few minutes and then you drive after idling it white smoke comes ...

What Is The Third Circle In My Mini Cockpit?

I just bought a 2011 cooper convertible. The cockpit has 3 circles behind the steering wheel. The left is the timer for the top down, the center is the digital tachometer and then there is a small c...

35 views with 3 answers (last answer about a year ago)

If Westlake Is Not Listed On Their Ad Can You Still Use Them?

Can You Use Westlake with any Dealer on CarGurus?