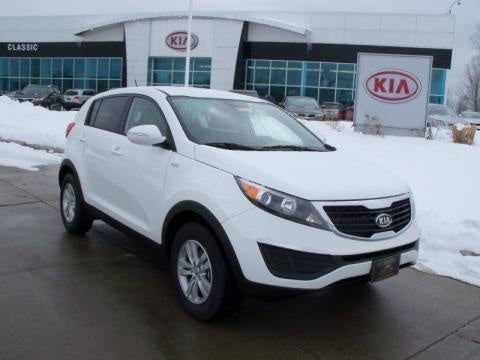 A snazzy new look, inside and out, plus a few more horses, surprisingly sporty handling, and a low sticker price add up to a boatload of value with the 2011 Kia Sportage.

Subpar ride quality, a smallish cargo area, less refinement than most rivals, and issues with visibility combine to saddle the 2011 Sportage with some daunting challenges.

Based on looks and value alone, the totally redesigned 2011 Sportage deserves a serious look. Kia aims high with this suddenly classy crossover, and owners reap the benefits of a sporty drive, added performance, a bit of automotive eye-candy, and one of the best warranties in the business.

With a total redesign of its 2011 Sportage crossover, Kia has decided it’s had enough and isn’t going to take it any more from the likes of Honda and Toyota. This five-passenger compact ute has new look inside and out, a new trim level, a couple of new color selections, and, in dropping the V6 in favor of an up-powered inline-four-cylinder engine (I4) and six-speed automatic transmission, a bit of extra giddyup and a tad more bang for the gas buck. A new, more aggressive grille design, higher beltline, detailed taillights, macho-oriented headlight and window design, and the added orange and blue exterior colors complement added textures and more masculine chiseling of console, door, and dashboard components. Larger roof pillars, however, give the 2011 Sportage some challenging blind spots, which will take a bit of getting used to, and only 54.6 cubic feet of cargo space with the rear seats folded may challenge the home handyman.

For 2011, the Sportage comes in three trim levels, the new Base, the now-midlevel LX, and the top-shelf EX. The Base is front-wheel-drive (FWD) only, while the LX and EX trims are available in either the standard FWD or available all-wheel-drive (AWD) versions. Later in the model year, Kia expects to unleash a turbocharged 2.0-liter I4 in the new Sportage SX trim level, with, of course, its legendary aim of keeping this charged up mini-ute affordable and cutting edge.

Long dominated by the likes of Honda’s CR-V and Toyota’s RAV4, the 2011 Sportage is ready to go after not only these perennial favorites, but Ford’s Escape, Nissan’s Rogue, Chevy’s Equinox, and Subaru’s Forester crossovers, as well. All of these formidable contenders remain a tad faster and more refined than the Sportage. Appearance-wise, however, Kia’s reworked compact crossover stands firmly alongside all of the above, while boasting value that few can match. Yep, Kia’s Sportage is positioning itself to seize vast chunks of the small crossover market, with its looks, performance, handling properties, and its legendary value already turning heads. 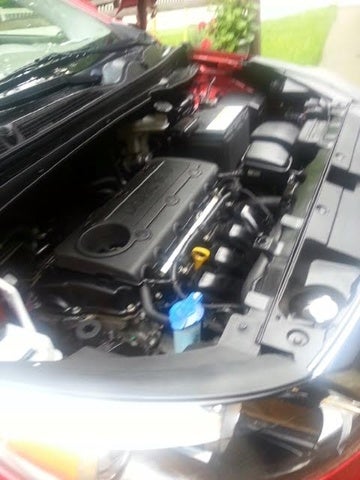 Without the underperforming V6 engine and inefficient four-speed transmissions, the 2011 Sportage lineup boasts a few more horses and two more gears for added power and efficiency. Standard in all trims is a variable-valve-timed 2.4-liter I4 powerplant that combines with a six-speed manual transmission in the Base trim, and six-speed auto-manual transmission in the LX and EX versions, for some 176 hp at 6,000 rpm and 168 lb-ft of torque at 4,000 rpm. The extra ponies are good for 2,000 pounds of towing capacity, with proper equipment, while the new six-speed transmissions ensure an estimated 21/29 mpg in FWD trims and 21/28 in the AWD configuration. Both the stick and automatic transmissions sport a handy hill holder feature, while the AWD system is managed by a mechanical, electronically locking center-mounted differential that provides full-time AWD traction with the added bonus of on-demand four-wheel-drive oomph in particularly challenging conditions. Additionally, descent control is added to the six-speed auto-manual transmission in the Sportage AWD trims.

Most reviewers consider the beefed-up I4 to be adequate, but still not quite up to much of the competition. Acceleration, though improved by over a second from 2010, still averages a somewhat pokey 9.7 seconds from 0-60, with the AWD trims just a tad slower than FWD versions. The six-speed transmissions, however, are lauded by virtually all reviewers as smooth and alert, with the manual boasting a short throw and silky clutch, and the automatic blessed with quick downshifting to get the most out of the I4’s depleted high-end torque. The opinion of reviewers is understandably divided as to the Sportage’s mileage numbers, with some praising its four-cylinder/six-speed efficiency, and others feeling that Kia could do considerably better. The I4, meantime, is noted by reviewers to be a bit raucous under heavy acceleration, calming down somewhat at highway speeds. Much is also made by reviewers of the expected turbocharged 2.0-liter I4 in the Sportage SX trim due out in the spring of 2011.

A four-wheel independent suspension, with MacPherson front struts, should help the 2011 Sportage in trying to gain a reputation for sure handling and a heady drive. A multi-link rear suspension, as well as front and rear stabilizer bars, complement standard 16-inch alloy wheels on the Base and LX trims and standard 18-inch alloy wheels on the EX version. Each trim level rolls on all-season tires.

Alas, despite the traditional unibody construction aimed at delivering a sedan-like ride, this compact ute suffers a stiff, almost harsh ride as a tradeoff for its vaunted handling characteristics. Reviewers are nearly unanimous in their opinion that the Sportage exacerbates nearly all bumps in the road, with the EX’s 18-inch wheels especially susceptible. Reviews constantly harp that the 2011 Sportage seriously lags behind the competition in this regard.

On the other hand, fast, tight corners are dispensed with easily, according to reviewers, with little body lean and, with the AWD trims especially, plenty of grip. A number of reviewers do feel, however, that steering is a bit feathery on the highway, with little feedback and less road feel. Brakes are described by most reviewers as adequate, if not spectacular, while road and wind noise are kept well in check.

Although not luxurious by any means, the 2011 Sportage lacks for little as far as cabin amenities are concerned. The Base trim, for instance, features cloth upholstery, a rear center armrest with storage, power windows, door locks, and mirrors, and tilt-wheel steering with mounted audio and cruise controls, as well as front and overhead consoles, and, of course, the obligatory air conditioning. Entertainment consists of a single-CD player with six speakers, Sirius satellite radio with three months of complimentary service, Bluetooth hands-free communications, and a USB connection. Regrettably, only a few cargo management items are offered as options with the Base trim level.

Reviewers are generally positive regarding the upgraded Sportage interior. Though liberal use is made of hard plastics, enough soft surfaces in the right places mitigate this financially necessary evil, according to most reviews. Head- and legroom are considered at least adequate by virtually all reviewers, though seats are regarded by some as a tad stiff. Most reviewers laud the manlier dashboard, with deeper, easily discernable gauges and larger, well-located buttons and switches that add to the appeal of this mini-ute. Unfortunately, numerous reviews also mention a problem with side and rear visibility due to the thicker roof pillars inherent in this snazzy crossover’s redesign, while cabin storage is described by most reviewers as barely adequate, at best.

The Insurance Institute for Highway Safety (IIHS) gives this spiffy crossover its best rating of “Good” for front and side impact protection, as well as roof strength integrity. This perfect score has earned the 2011 Sportage “Top Safety Pick” honors from the IIHS. Meanwhile, the National Highway Traffic Safety Administration (NHTSA), in the midst of realigning its testing criteria for 2011, gives the 2010 Sportage its best five-star rating in front and side impact testing, while awarding three stars for rollover protection in FWD trims and four stars for AWD rollover safety.

Owners of the 2011 Kia Sportage, mirroring most professional reviews, cite tepid gas mileage, a bumpy ride, challenging visibility issues, meager cargo capacity, and traditionally weak reliability as pet peeves. Most, however, seem willing to overlook these faults in lauding this crossover ute for its freakishly low sticker price and strong warranty coverage. In short, outstanding value is what tempted nearly all owners into the Kia showroom, and most seem not to regret the decision.

As if value weren’t enough, additional owner kudos go to the 2011 Sportage’s revamped look and performance, cabin room, and plethora of standard features, with its Bluetooth hands-free communications and available oversize power sunroof coming in for especial praise. Finally, the Sportage’s tight turning radius, despite its lengthy stance, has owners unafraid to brave crowded parking lots and big-city traffic.

Users ranked 2011 Kia Sportage against other cars which they drove/owned. Each ranking was based on 9 categories. Here is the summary of top rankings.

Have you driven a 2011 Kia Sportage?
Rank This Car

My Sunroof Wont Close What Do I Do

my sunroof will not close

Is The Intake Manifold Included In The Powertrain Warranty?

Is AC Coolant Removed When An Engine Is Removed?

I had my engine removed, rebuilt and replaced. Now the ac does not blow cold air. When an engine is Removed and Replaced does the mechanic usually disconnect the ac lines which might result in the...

The passenger side and rear door doesn't lock/unlock with the remote or when pressing the button in the car. It clicks like it wants to and intermittently it does work. Tried changing the fuses to...