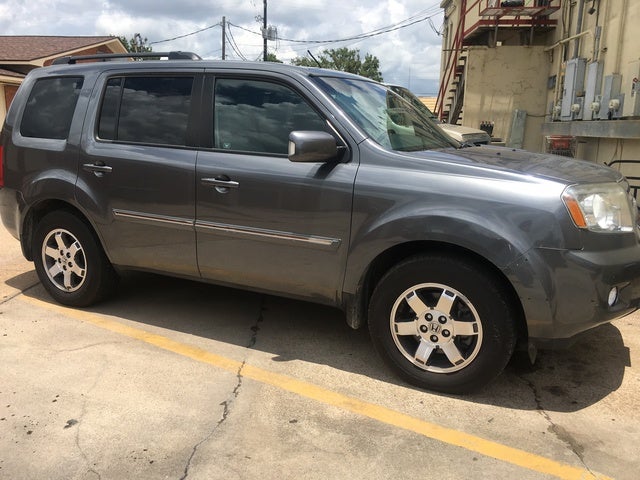 Alas, the 2011 Pilot continues to suffer from lackluster brakes, as well as sluggish acceleration off the line, tepid fuel economy, low-rent cabin materials, and a cluttered center stack.

As a family-friendly CUV, the 2011 Honda Pilot works well enough. There are, however, other crossovers out there with significantly better refinement and performance. Despite its pedigree, the Pilot is distinctly middle-of-the-road.

Relying perhaps a bit too much on past glory, the 2011 Honda Pilot may be running out of steam. Granted, this family-oriented eight-passenger midsize crossover SUV still looks like it can tackle the Matterhorn, while a car-like ride and loads of standard features coddle driver and passengers, but rivals, such as Dodge’s Journey, GMC’s Acadia, Toyota’s 4Runner and Highlander, Chevy’s Equinox, and Ford’s Flex offer more refinement, better performance, and classier styling for about the same money. Despite its reputation for reliability, build quality, and kickin’ resale value, Honda is facing slumping sales with its new Pilot generation simply because it can’t or won’t keep up with the competition.

Again in 2011, the Pilot is available in four trim levels, the base LX, lower-midlevel EX, upper-class EX-L, and top-of-the-line Touring. Though front-wheel drive (FWD) is the standard drivetrain configuration, four-wheel drive (4WD) is available in each trim level. Additionally, all trims pack a tolerably peppy V6 engine with its ubiquitous five-speed automatic transmission. Though essentially unchanged from 2010, the latest incarnation of the Pilot sports an available hard-drive navigation system for the EX-L and standard rear-seat DVD entertainment in the Touring trim.

Among the 2011 Pilot’s high points is a spacious cabin with some 87 cubic feet of cargo room when the rear seats are folded flat, as well as a surprisingly generous third-row seat, standard trailer hitch and wiring across the lineup, a commanding stance, and a truck-like profile that remains distinctly un-crossover-like. So go ahead and kick the 2011 Pilot’s tires, but be advised that there are other mini-utes out there that offer similar if not better value. 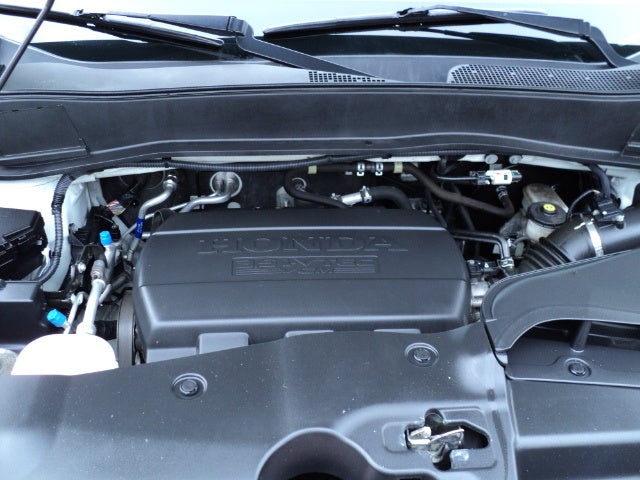 The sole powertrain for the 2011 Honda Pilot remains a 3.6-liter V6 engine under the management of a dated but still effective five-speed automatic transmission with brake hill holder. This matchup puts out 250 hp at 5,700 rpm and 253 lb-ft of torque at 4,800 rpm. Variable valve timing and Honda’s Variable Cylinder Management cylinder deactivation system (VCM) help earn a less-than-joyous 17/23 mpg for FWD trims and 16/22 for 4WD configurations, while trailer-towing capacity is 3,500 pounds for FWD Pilot trims and 4,500 pounds for 4WD-equipped trims.

The 2011 Pilot’s on-demand 4WD system is modulated by a manually operated rear locking differential that provides Variable Torque Management (VTM) by adding torque to the rear wheels when slippage is detected in the front wheels. This feature comes in handy when starting out in particularly tough road conditions and will automatically unlock after reaching 18 mph.

Most professional reviewers are relatively unimpressed by either the V6’s performance or its fuel efficiency, though none goes so far as to actually dismiss it outright. One test had the 2011 Pilot plodding from 0-60 in 9.7 seconds, with the comment that this time is nearly a full second behind most of the V6-equipped competition. Once up to speed, however, the V6 gives ample signs of being able to pass and merge with the best of them, while the five-speed automatic is generally smooth and responsive in its shifts. Several reviews do mention that the automatic has a propensity to hunt around for the proper gear when pushed a bit. Additionally, several reviewers note the hefty curb weight of this sturdy ute to be a distinct drag on engine performance. On the positive side, all reviewers agree that the V6 emits a pleasantly throaty growl on acceleration that ought to impress owners and bystanders alike.

Utilizing a four-wheel independent suspension, MacPherson front struts, front and rear stabilizer bars, and multi-link rear suspension, the 2011 Pilot is well-known for its comfy if not exactly luxury-laden ride. The LX, meanwhile, offers 17-inch steel rims, while the EX and above trims sport 17-inch alloy rims, with all trims rolling on all-season tires.

Though some float and wallow do occasionally rear their ugly heads, most reviewers claim the Pilot recovers nicely and reduces rough pavement to a non-factor for the most part. Handling characteristics, however, are a different matter, with most reviewers agreeing that steering can be ponderous, with a goodly amount of body lean in tight cornering. Noseplow, though not excessive, remains noteworthy to more than a few reviewers, while several agree that 4WD trims seem better composed all around, not to mention boasting some moderate off-road capability.

Braking, long a sore spot with Honda vehicles, is once again considered iffy on the Pilot. Though reviewers appreciate the tight pedal feel, virtually all agree that this hefty ute takes an uncomfortably long distance to come to a full stop.

A strong suit of the 2011 Pilot lineup is its plethora of standard creature comforts. The base trim of the lineup, the LX nevertheless offers a host of standard cabin amenities. Features such as cloth upholstery, remote power door locks, power windows and mirrors, cruise control, telescoping and tilting steering wheel, front and overhead consoles with storage, front and rear air conditioning, and 135 watts of audio with an MP3-capable single-CD player and seven speakers including a subwoofer complement such plebian items as a trailer hitch and wiring, trip computer, and privacy glass. Stepping up to the EX gets an eight-way power-adjustable driver’s seat with power lumbar support, steering-wheel-mounted audio and cruise controls, universal remote garage door opener, tri-zone climate control, and a 155-watt stereo with 6-CD changer and XM satellite radio.

The only true options offered with the Pilot are the navigation system and rear-seat DVD entertainment available in the EX-L trim level. There are, however a number of what Honda likes to call accessories, such as a roof rack, 17-inch alloy wheels, rear parking sensors, and upgraded cabin trim for the LX, with 18-inch alloy wheels and remote engine start available for the EX and above trims. Step running boards are additionally available across the lineup.

Though reviewers are unimpressed with the plethora of hard plastic surfaces common in the 2011 Pilot, they do laud its comfy seats and unusually generous third-row space. The center stack is noted to be a bit cluttered with buttons and knobs, with the somewhat awkward placement of the dash-mounted shifter complicating things just a little more. Cabin storage is described as generous, while the rear-seat climate control system in the higher trims is praised by a few reviewers for its handy LCD screen and centralized location.

With its more demanding testing system implemented, the National Highway Traffic Safety Administration (NHTSA) gives the 2011 Pilot five stars for side impact occupant protection and four stars in front impact and rollover protection. The Insurance Institute for Highway Safety (IIHS), meanwhile, gives the Pilot its highest score of Good in front and side impact testing, while rollover protection is rated as Marginal, its next-to-lowest score.

Tepid gas mileage and lazy acceleration seem to be the major hang-ups that owners find with the 2011 Pilot, with many lamenting the lack of a six-speed transmission or available V8 powerplant. The dash-mounted shifter has several owners scratching their heads, while chintzy cabin materials and a less-than-ideal stereo sound haven’t exactly elevated the Pilot to legend. Additionally, the standard power sunroof in the EX-L and Touring trims is said by more than a few owners to need some revision, while others bemoan a continuing lack of stand-alone navigation, rear-seat entertainment, rear-view camera system, or up-graded audio.

On the plus side, owners of the 2011 Pilot are very satisfied with its styling, cabin and cargo space, reliability, and the smooth ride they get with this midsize crossover. More than a few owners additionally laud this hefty ute’s improved braking capability, though a couple mention that it still isn’t perfect. Finally, the traditionally high resale value of the Honda brand is mentioned by a majority of owners when praising their new Pilot.

trinab35 Overall I love my 2011 Honda Pilot 2WD. I have had it for 2 years and it has 35000 miles on it. It had been getting great gas mileage for the last 2 years...22 Hwy and 18 city but suddenly in the last couple of months, I am only getting 14 mpg in the city. I keep the oil and filters changed and get regular maintenance, so not sure why the sudden change. Other than that it's great. Use it like a truck and it drives and handles like a car.

Have you driven a 2011 Honda Pilot?
Rank This Car

I had to replace my battery yesterday and my radio doesnt even ask for the code which I have. My buttons on the radio itself dont work so nothing will come on....help?

It came on when I was driving one day. What is my best course of action?

Have a 2011 Honda Pilot and the rear windshield wiper doesn’t function. Checked fuse, good but replaced it anyways. So I picked up a new/used motor off eBay and it didn’t work either. Tested it, a...

Did I Fry Something?

2011 Honda Pilot. My Check Engine Light Came On Last Night And I Went To N...