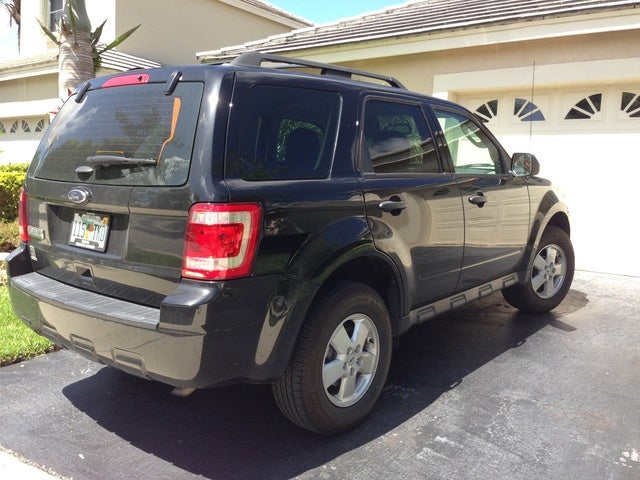 The 2011 Ford Escape impresses the way it has for the last decade, as a nice-looking, smaller SUV ready to tackle small chores and fun trips without putting a major crimp in a gas, or new-car, budget.

The Escape has punched the clock and put in a good, solid effort with Ford since the turn of the century, but the 2011 version looks tired and has watched its rivals maybe pass it by and needs some help.

Ford has more than gotten its money, and its mileage, out of the Escape and owes it a makeover. The makeover need not be extreme, but chances are it will be substantial and will set this popular model up for another lengthy run of success.

A bit of a trend-setter when it first burst onto the scene, the 2011 Ford Escape appears ready to carry the banner to the end, with all signs indicating the automaker will bring out a redesigned and perhaps even renamed version of its midsize SUV for 2012. The Escape has had a nice decade-long run and still fits in well among its competitors, including the Toyota RAV4, Honda CR-V, Subaru Forester, and Chevrolet Equinox.

The Escape will go out much the same way it came in, which is to say that while it got some tweaking a couple of years ago, not a whole lot has changed over the years, and some critics feel the vehicle is on the tired side. The Escape remains a little boxy and trucky compared to some of its sleeker rivals, and while it may not be designed for heavy off-road duty, it does have relatively high ground clearance and a distinctly sporty side, just right for loading up a few softball players and their gear for practice or the big game.

Ford offers the Escape in three trim levels – the base XLS, midlevel XLT, and high-end Limited - and each comes with either front-wheel drive (FWD) or full-time all-wheel drive (AWD). 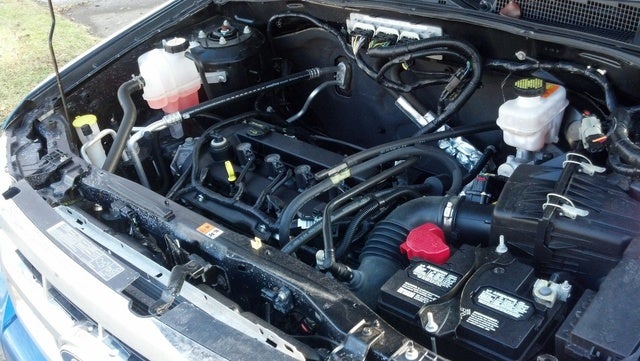 Ford equips the 2011 Escape with a couple of powerplant and transmission options. The Escape offers a 2.5-liter inline four-cylinder engine as its standard. The engine puts out 171 hp and also 171 lb-ft of torque. The front-wheel-drive XLS has a five-speed manual transmission standard, and a six-speed automatic is optional. The six-speed auto is standard for all other trims. The I4 gets 22 mpg city and 28 highway in FWD trims and 20/26 in the AWDs.

The I4 rates a 1,500-pound towing capacity when equipped properly, and the V6 jumps that number to 3,500 pounds when set up with the optional Class II towing package. 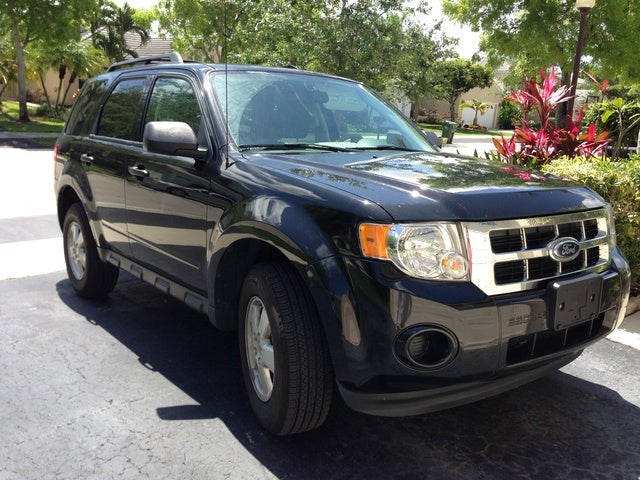 The 2011 Ford Escape, relying on body design that was rather innovative when first it hit showrooms, draws mixed reviews for its ride and handling. While some experts praise it for a smooth ride and easy handling, others find it too rough and a little loud.

The Escape teams a four-door body shell with a front-wheel-drive, car-type body chassis to make a single, unibody structure with an independent suspension. In the early days, most SUVs were more like pickup trucks, with a body bolted to a rear-wheel-drive frame. The Escape broke the mold and had an edge back then, but others have caught up in the meantime.

Reviewers appreciate some of the Escape’s technology, including its electric power steering, which helps save on fuel consumption. That electric power steering also allows Ford to offer what it calls an Active Park Assist function, available in the Limited trim. With it, sensors measure a suitable parallel-parking space and then use the electric steering to back the Escape into a space while the driver - with hands off the wheel – controls speed with the brake.

Four people fit nice and comfortably in the Escape, but experts find that five can be a bit tight, and there’s no third-seat option, a choice offered by many in this class. All trims of the Escape get 16-inch wheels as standard fare, and 17-inch chrome-clad wheels are an option for the XLT and Limited versions.

The phrase Jekyll & Hyde pops to mind when discussing cabin and comfort in the 2011 Ford Escape. Reviewers find the Escape suffers in comparison to its rivals in its interior offerings more than in other areas, in part because of its advanced age. At the same time, they credit Ford with loading the Escape up with some of the best gadgets around.

The experts frown on the Escape's boxy interior and feel, despite some recent refinements, that it hasn’t kept up with the styles and sometimes the materials of the times. That said, they give good marks to features such as the Escape’s Ford/Microsoft Sync infotainment/communications center, which can deliver turn-by-turn directions and other information through the audio system. For 2011, the Escape adds an HD radio setup, providing better-quality broadcast sound where available.

Cloth upholstery in the XLS trim gives way to premium cloth in the XLT and leather in the Limited. The XLT also adds a power driver’s seat, while dual-zone climate control and heated seats are available for the XLT and Limited trims. 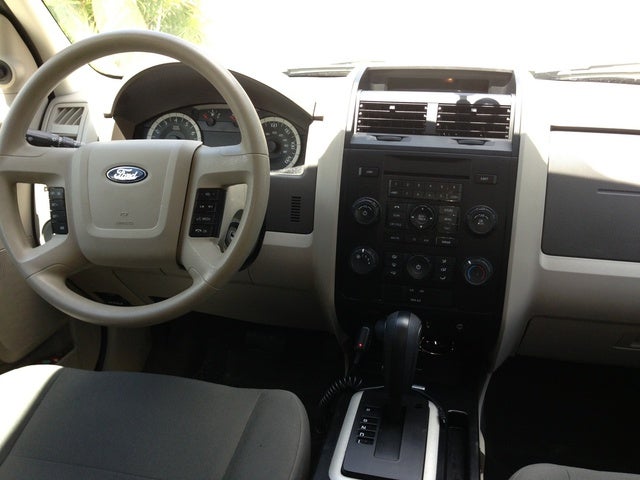 The Ford Escape has stayed popular among those who drive it for a decade, and that isn’t about to change with the 2011. Owners like the classic looks of the Escape and appreciate its fuel economy and cost in relation to many competitors. They think it holds a good amount of gear for a smaller SUV and tend to like the Escape’s handling, its ride, and its ability to roll up and down hills, though some find it could use a little more acceleration.

Reviews on how the Escape shifts through gears can be mixed, as some report it does so smoothly and others are not impressed. Owners also are ready for some updates overall in the Escape, particularly in its cabin.

kerwin911 The Ford Escape 2011 is a tough gritty performer and gives the owner the confidence of having a reliable, secure, well structured good vehicle that is far ahead of the competition pack. Yes, the gas economy could be a little better but overall this Suv does it all with comfort, styling and affordability even thought they are overpriced, like all others. I regret buying a Jeep Patriot that was a substandard junk lemon as the Ford Escape was the better choice hands down. Whether your'e heading for a family holiday, fishing, road trips, everyday usage, camping or escaping the concrete city jungles the Ford Escape meets the needs, values and wants of any buyer. Don't settle for seconds; go for the gusto with a better peformer with better reliability and overall value. I don't get paid for this but the truth must stand alone. Kerwin Maude, Canada

Guru9DDV3P Good luck. I was looking on line and thought it would be a good vehicle for my son. God bless.

Users ranked 2011 Ford Escape against other cars which they drove/owned. Each ranking was based on 9 categories. Here is the summary of top rankings.

Have you driven a 2011 Ford Escape?
Rank This Car

Hello I have a 2011 ford escape. I'm having an issue every morning with my battery being dead. I just got a new battery a week,ago. I took it to a shop and they said my batter and alternator is fin...

Hi, so the dealer I bought my 2011 Escape from three years ago is telling me that the subframe is rotten to the point where it's unsafe to drive.. I just looked at it... And I don't think they're t...

Our 2011 Ford Escape's AC isn't working properly. At first blower levels 1 and 2 were not working, the AC was working sometimes and not others, and then the fan was turning and running almost consta...

I have a 2011 Escape XLT 4wd that I plan on using on the beach to surf fish. I am trying to fine where the recovery point is to install a recovery hook. Or is there a way to mount one on the vehicl...

My Air Conditioner Is Not Producing Cold Air - Why?

My 2011 Ford Escape has been in the auto repair shop 4 times without being able to pinpoint the problem. The air seems to work when the outside temp is below 80 degrees but doesn't work for 90% of th...