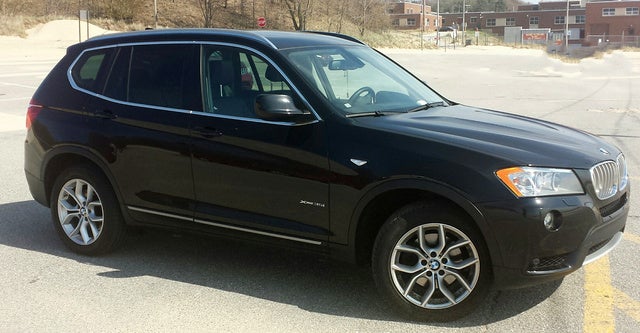 BMW's once-popular X3 crossover has been outclassed of late by newer, slicker rivals. Never ones to duck a competitor's challenge, the engineers at BMW have rolled out an ambitious all-new X3 for 2011. Riding on a longer, wider platform than its predecessor, the 2011 X3 is sure to give the Audi Q5 and Mercedes GLK-Class a run for their money in the red-hot luxury CUV market.

The X3's complete redesign includes fresh sheet metal that aligns with BMW's successful (though somewhat safe) new design theme. The prominent, upright kidney grille and jewel-like headlamps are a strong statement, while the sweeping side character lines and tapered greenhouse soften things up a bit. The overall result is cohesive and handsome, if not very different. Though the avant-garde BMWs of the Chris Bangle era weren't universally loved, they at least stood out from the crowd. The 2011 X3 is surely classier, but it blends in a bit in this increasingly crowded segment.

For 2011 the X3 is offered in one of two somewhat oddly named trims. The X3 xDrive28i features BMW's silky-smooth straight-six motor and standard all-wheel drive, while the upmarket xDrive35i benefits from high-pressure turbocharging and 18-inch alloy wheels.

Mechanically, the 2011 X3 leapfrogs the competition with an advanced 8-speed transmission and an innovative regenerative braking system. Drive either version of the new X3 and you'll immediately understand why it costs so much, yet still has vinyl-covered seats. Under the hood, buyers are treated to one of BMW's exceptional inline six-cylinder engines. The turbine-like smoothness and balance of the 3.0-liter unit is unmatched by even the most sophisticated competitors.

Though the 2011 X3 tips the scales at over two tons, even the base six-cylinder's 240 hp and 221 lb-ft of torque are plenty for highway merging or brisk passing. An efficient and quick-witted ZF 8-speed automatic transmission, the only gearbox offered, is always ready to capitalize on the engine's large sweet spot. The standard all-wheel-drive system features a rearward torque split in an effort to bring the X3's handling in line with BMW tradition.

The powerful xDrive35i features a turbocharged version of the 3.0-liter six that makes 300 hp and 300 lb-ft of torque. All that added punch helps the 2011 X3 xDrive35i feel exceptionally frisky around town, though enthusiasts seeking a manual transmission to truly take advantage of the power will be left out in the cold. One groundbreaking X3 feature is brake energy regeneration. While commonplace in hybrids, regenerative brakes make their gasoline car debut in the 2011 X3, helping to recharge the battery without the aid of the engine.

A harsh ride plagued the old X3 from the beginning, and BMW engineers have gone to great lengths to soften things up for 2011. The suspension is still vintage BMW with MacPherson struts in front and a multilink setup in back, but the revamped dampers and spring settings allow for much more comfortable cruising. Despite its inflated curb weight, the 2011 X3 is quite agile, slicing through traffic with ease. An optional dynamic handling package allows drivers to fine-tune the X3's ride with adjustable dampers and adds variable effort power steering that sharpens up helm response.

Interior space was another area in which the old X3 was deficient, and as with the ride, the folks at BMW have big improvements in store for 2011. The larger body shell, combined with improved packaging, allows the X3's cabin to accommodate five adults in relative comfort. Rear seat legroom is greatly improved, and the cargo compartment can hold up to 19 cubic feet of gear. The increase in width brings much better elbow room, and the power-adjustable front seats are comfortable and supportive.

Though BMW touts the 2011 X3's newly expanded standard feature list, the base interior is still rather austere. The X3's leatherette seats and matte silver trim are nicely finished but decidedly low-rent. Real cowhide, plus niceties like heated seats, navigation and a power tailgate are expensive options even on the top-line xDrive35i. Checking most of the boxes sends the X3's price over fifty grand in a hurry, not unusual for this segment, but eyebrow-raising nonetheless.

Standard safety features in the 2011 X3 include six airbags, active head restraints and seatbelt pre-tensioners. Though the 2011 model hasn't yet been crash-tested by any major agency, its stiff structure and advanced systems should help the new X3 meet a high standard for occupant protection. Like all BMWs, the 2011 X3 comes with no-cost maintenance during the 4-year, 50,000-mile warranty period, a benefit that can save owners a bundle on increasingly expensive upkeep.

DanD80 I have a 2011 X3 and overall it provides a good mix of space and flexibility. Mileage is about 25MPG average and better on long trips but handling is not nearly as crisp as expected. I owned a 2003 325xi before and there is no comparison in the handling.

Can I Advertise My Canadian Car And Sell It From Canada?

I am a canadian resident and would like to advertise and sell my car with this site. My car is OK for the US. Is it possible?

96 views with 4 answers (last answer about a year ago)

One Beeping When Stopping My BMW X3 2011

421 views with 4 answers (last answer about a year ago)

100 views with 1 answer (last answer about a year ago)

both are priced the same, about $22K. any major differences/engine/transmissio... changes that make one model year better than the other?

Any Help Would Be Appropriated TIA

Which is a better car? More reliable? The bmw x3 or the range rover sport??