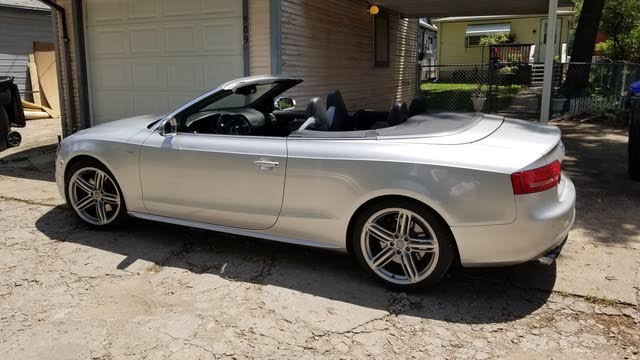 The Audi S5 represents a pleasant blend of sport touring luxury, seemingly without sacrificing much of any one factor. Immediately identifiable from their tamer brethren, the “S” models all share several features, such as Quattro all-wheel drive (AWD), LED lights surrounding front and rear lamps, and the distinctive vertical emphasis lines in the front grille. Given the sport focus of the S models, Audi was kind enough to provide an AWD system that shifts the balance to the rear, providing a 40/60 front-to-rear power distribution, a nice blend of stability and traditional sport feel.

And a lot of that sport feel can be attributed to the powerful engines offered in this two-door coupe or convertible, each with its own distinct powerplant. The S5 Coupe gets the same direct-injection 4.2-liter V8 that can be found in the RS4 and R8, although slightly detuned to produce 354 hp instead of the 420 horses put out in RS4 and R8 applications. Torque is actually increased here in the S5, however, with 325 lb-ft instead of 317. Regardless of the horsepower loss, the 4.2-liter engine is a precise piece of engineering that is crude in neither output nor delivery. It comes with the option of two six-speed transmissions, and the automatic is clearly the better choice here. When paired with the manual, the 4.2 can return an EPA-estimated 14/22 mpg, but with the automatic those numbers bump up to 16/24. More importantly, the manual has a lengthy throw and sloppy operation that robs most of the enjoyment from its 4.9-second 0-60 capability. The automatic offers no such shortcomings, if you don’t mind letting the car do all the work for you.

The Cabriolet trim gets its own engine, which is just as potent. Instead of a V8, the Cabriolet is powered by a supercharged 3.0-liter V6 that produces 333 hp down at only 5,500 rpm. Its torque matches the 4.2's at 325, but arrives 600 rpm sooner, at 2,900. It doesn’t have the immediate power of the V8, but there’s plenty to spare once the supercharger winds up, and its seven-speed automated manual transmission is by far the best of the bunch in operation, fun, and fuel economy, returning 17/26. Truthfully, it’s a shame those choosing the Coupe don’t get the option of at least this transmission, if not the 3.0-liter engine. The seven-speed is silky, quick, and efficient.

For the cars it competes with, the S5 offers similar and often superior performance, increased practicality, and a lower price than most. This certainly explains why so many reviewers have named it a best in class. It may not have the immediate visual capital and name recognition of a Porsche or a Mercedes, but you’re too smart to fall for marketing, right?

Masood In real world driving, those MPG figures of 14/22 are just the figures on the paper. Actually it would be 12/18 of Premium gas.

Do You Have People Who Inspect Cars Presale

Do you have people to hire that will inspect the car before I buy at th elocation?

What Is The Best After Market Exhaust For An Audi S5 Cabriolet?