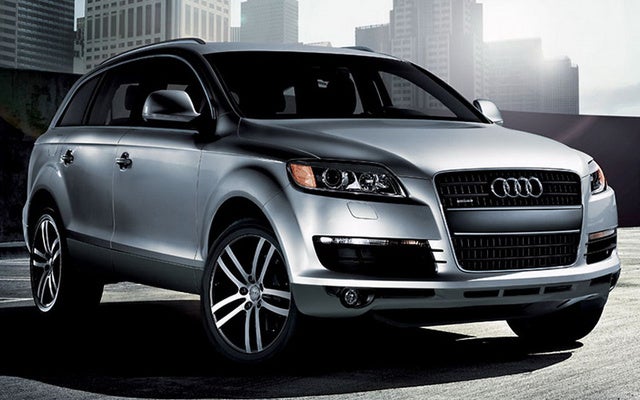 Audi’s large Q7 luxury SUV has been a hot seller since its introduction in 2007. By marrying European style with a healthy dose of practicality, Audi has created a compelling alternative to more traditional full-size trucks like Chevy’s Tahoe. For 2011 the Q7 gets some major drivetrain updates to remain competitive in a hotly contested (and lucrative) segment also populated by the Mercedes GL-Class and the all-new Lexus GX 460.

The 2011 Q7 rides on Audi’s version of the PL71 platform. This unit-body architecture is shared with the Volkswagen Touareg and the Porsche Cayenne, endowing the Q7 with the same sprightly handling as its siblings. While not dimensionally challenged by any means, the full-size Q7 manages to conduct itself with a level of grace missing from the pachyderm SUVs sold by domestic automakers. If your requirements include heavy-duty towing or hauling, a Lincoln Navigator or GMC Yukon may be a better choice, but if you value performance and ease of operation, the Q7 will dazzle you with its polished demeanor.

At 200.3 inches the Q7 is nearly a foot longer than its VW and Porsche platform mates. As such it offers the added utility of seven-passenger seating, via a standard third-row bench, along with a commodious cargo bay. Weighing in at a portly 5,170 pounds, the Q7 is no lightweight, yet next to an elephantine Suburban or Navigator, it’s positively svelte. This (relative) lack of mass enables the Q7 to perform around-town errand duty with a minimum of drama.

For 2011 Audi has graced the Q7 with an all-new drivetrain. Replacing the old six- and eight-cylinder engines are a pair of supercharged V6s, borrowed from the hot S4 sports sedan. In base trim the 3.0-liter V6 produces 272 hp and 295 lb-ft of torque. Pricier trims get a higher-pressure supercharger that boosts output to 333 hp and 325 lb-ft of torque. Both engines are mated to a new, eight-speed automatic transmission that drives all four wheels via Audi’s familiar Quattro AWD system. While instrumented testing hasn’t yet been performed, expect the 2011 Q7 to easily best the outgoing model’s acceleration while delivering comparable (or better) fuel economy.

While the direct-injection V6s will no doubt prove popular, it is the revamped 3.0-liter turbodiesel that merits serious consideration. Serving up 240 hp and a healthy 406 lb-ft of torque, the diesel V6 also gets a new eight-speed gearbox and figures to do the 0-60 trick in less than 8 seconds. Fuel economy with the diesel should exceed 20 mpg on the highway, excellent for such a large vehicle. In Europe the Q7 can be ordered with a barking-mad 6.0-liter V12 twin-turbo diesel that generates an amazing 738 lb-ft of torque. Unfortunately this motor (and the carbon-ceramic brakes that come with it) won’t be offered here in the States.

Last year the Q7’s exterior was subtly upgraded with new LED head- and taillights, along with revised front and rear fascias. For 2011 the exterior carries over unchanged, as does the Q7’s award-winning interior. While not as avant-garde as its Porsche Cayenne stablemate, the big Audi still pulls off a classy, integrated look. Its slick LED lights are both stylish and brightly functional, while the gaping front grille clearly establishes Audi’s corporate identity.

All Q7s benefit from the well-executed interior design that has become an Audi hallmark. Panel gaps, materials, and textures are all first-rate, and the polished wood veneer trim wouldn’t be out of place in a Rolls-Royce. The supportive front seats are comfortable for long trips, and the elevated driving position combines with an airy greenhouse to deliver great visibility. The second-row seats are spacious enough, but the rather small third row is best suited for small children or adults you don’t particularly like.

Though sporty handling isn’t high on most SUV buyers' list of priorities, the 2011 Q7 delivers some of the most entertaining driving dynamics this side of the Porsche Cayenne. While perfectly content to putter around town or cruise the highway, the Q7 actually responds quickly to the helm when pushed, turning in crisply and holding its line with admirable tenacity. To be sure no one will confuse the two-and-a-half-ton Q7 with a sports car, but compared to ladder-frame domestic trucks, it’s positively dainty. Ride quality is superb with all but the largest wheels, and its beefy vented disc brakes slow the big SUV with confidence.

Safety features for the 2011 Q7 include standard front, front side, and curtain airbags, with rear side (torso) bags optional. Automatic safety-belt pre-tensioners and standard stability and traction control provide an added level of security, but the lack of a full-size spare tire makes an auto-club membership a good idea. In government crash testing previous model year Q7s have fared very well, earning five-star ratings in both front and side impacts.

Like most of today’s Audis, the Q7 does nearly everything well. Instead of trying to please one set of the buying public (do we really need 10,000-pound tow ratings or low-range 4WD?), the German automaker has aimed squarely at the center of the large SUV market and scored a direct hit. While its price (starting at $46,900) may not be within reach of most buyers, the Q7’s combination of luxury and capability still make it an excellent value.

After Adding Adblue To My 2011 Audi Q7, Will The System Reset Itself?

I have a Audi Q7 Diesel car, the glow plug symbol keeps flashing and the car won’t start at all what do I do to fix it?

After Private Party Purchase In CA Can I Drive The Car Without License Plat...

In CA I purchased a car that is registered in OH and seller kept his personalized license plates, so I have no plates on the car right now. Seller lives in CA but never transferred registration to C...