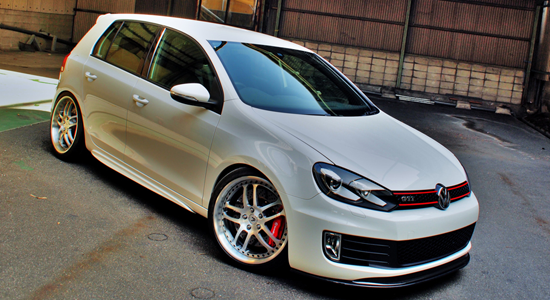 Volkswagen’s resident hot hatch gets a mild refresh this year, although it's an almost exclusively visual one. The 2010 Volkswagen GTI two- or four-door hatchback is still powered by the same 2.0-liter, turbocharged, inline four-cylinder engine, although with a 10-hp bump, with your choice of six-speed manual or automatic transmissions. The GTI has been continually praised as the best-handling front-wheel-drive vehicle on the market, and Volkswagen has done nothing to ruin things in this latest iteration.

With a new front valence, fenders, and rocker sills, the entire exterior has been designed to give the car a decidedly lower, more athletic and aggressive profile. This also improves aerodynamics and supposedly efficiency, although with VW recommending premium-grade gasoline, don’t expect to save money at the pump. The interior gets a similar refresh, and while the upscale attempt has been well-received, especially in comparison with rivals like the Civic and MAZDA3, complaints have been heard about an overly complicated navigation system and instrument coloring that makes reading difficult.

Still, the refresh has been rated an improvement overall, especially considering Volkswagen didn’t mess with some of the GTI’s best features - comfortable and supportive heated sport buckets (with the VW-specific Interlagos plaid upholstery), coupled with interior head- and legroom that can satisfy even 6-footers. The base stereo is a 6-CD unit that is satellite radio ready and comes with an adapter for any digital-media interface. The hatchback makes for easy loading, of race equipment we have to assume, due to a low and wide opening. The split-folding rear seats do not fold flat however, which is a bit of a disappointment. Entry and exit for the rear seats is doable in the 4-door and a challenge in the 2-door, although once inside, space is ample.

Lots of changes have been made to improve the handling of the GTI over the years, most notably the switch from a live rear axle to the current fully independent suspension. Whereas enthusiasts used to brag about the vehicle’s ability - or was that tendency? - to lift an inside wheel during hard cornering, Volkswagen has done much to produce the same feel without the same dangerous result. A big part of this process is utilizing an electronic transverse differential lock in the limited-slip differential, which will automatically brake the inside rear wheel during spirited cornering to keep all four feet firmly in place. This, in conjunction with the electronic stabilization program, should keep surprises at bay, much to the chagrin of many fans of the model. Steering and braking are class-leading, however with its low stance, sport-tuned suspension, and low-profile tires, the GTI can be a bit rough over non-track surfaces. The optional 18-inch wheels are especially capable of transferring every ripple and bump straight to the steering wheel.

After many negative reactions to the last version of the GTI, Volkswagen seems to have found a design that most, if not all, can agree on. While checking off options will push the GTI to the head of the price wars in this class, you’ll also be getting the best-handling and perhaps most refined example therein. It's a shame that we’re still getting a watered-down version compared to what’s offered in Europe, but we’re also getting it at damned near two-thirds of the price. For that kind of cash, you can keep your climate control and park assist. Who wants to park, anyway?

What's your take on the 2010 Volkswagen Golf GTI?

GuruVX8P1 Is it a reliable car?

Users ranked 2010 Volkswagen Golf GTI against other cars which they drove/owned. Each ranking was based on 9 categories. Here is the summary of top rankings.

Have you driven a 2010 Volkswagen Golf GTI?
Rank This Car

I got a golf gti mk6 . Live in Asian country which the weather is hotter than the Europe countries. The question is, Do I can still use the same type and gred of engine oil, atf oil and the coolan...

Had new rear brakes put on my 2010 VW GTI. Now the brakes stay compressed so much that it is heating up the rear wheel. Almost like the emergency brake is on but it is not. Did not have this problem b...

TPMS light blinks for about a minute then stays solid . No reset button in glove box .