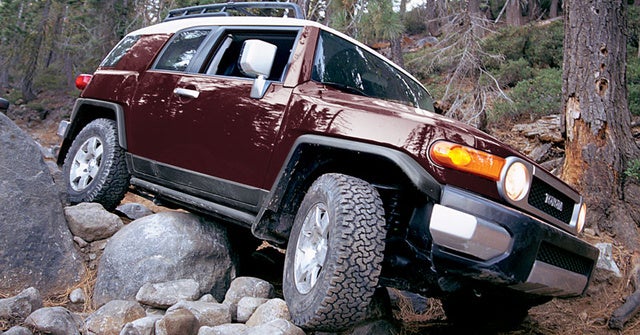 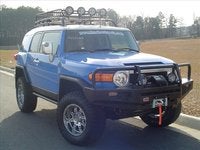 Toyota’s popular 2010 FJ Cruiser continues to woo serious (and pretend) off-roaders with a mix of craggy retro looks and heavy-duty four-wheel-drive (4WD) hardware. While one of Toyota’s many other SUVs would make a better daily driver, the FJ Cruiser possesses off-road capability second only to that of Jeep’s vaunted Wrangler. For 2010 a newly energized V6 engine gives excellent performance, but don’t expect miserly fuel economy.

Inspired by Toyota’s legendary Land Cruiser FJ40 series of the 1960s, the new-generation FJ Cruiser has proved a popular and capable successor, with real off-road credentials and funky, vintage styling. Available only in a 2+2-door wagon body style, the 2010 FJ Cruiser seats five passengers in its wide cabin. The extra-wide track combines with a short wheelbase and abundant ground clearance to endow the FJ Crusier with stellar off-road capabilities. The FJ Cruiser gets a new dual variable valve timing system for 2010 that boosts horsepower and improves the two-ton off-roader’s acceleration.

Though rear-wheel-drive (RWD) models are available, it is a sophisticated pair of 4WD systems that give the FJ Cruiser the ability to forge deep into the brush. That Toyota makes a point of publishing the FJ’s approach and departure angles (34 degrees in the front and 31 degrees out back) signals its confidence in the SUV’s ability to carry on the FJ40’s off-road legacy. A host of dealer-installed accessories like brush bars, roof lights, and cargo racks can further upgrade both the FJ Cruiser’s looks and capabilities.

While trail climbing and rock hopping are its stock in trade, the 2010 FJ Cruiser can do double duty as a suburban errand runner. Unlike its closest competitor, the Jeep Wrangler, Toyota’s FJ has a completely enclosed cabin with plenty of sound deadening and niceties like power windows and locks. Yet despite its concessions to convenience, the 2010 FJ Cruiser still isn’t an ideal daily driver; its ride is bouncy, and the fuel economy is atrocious. Unless smitten by the retro styling, buyers who don’t need the off-road ability would be better off with another of Toyota’s excellent SUV choices. 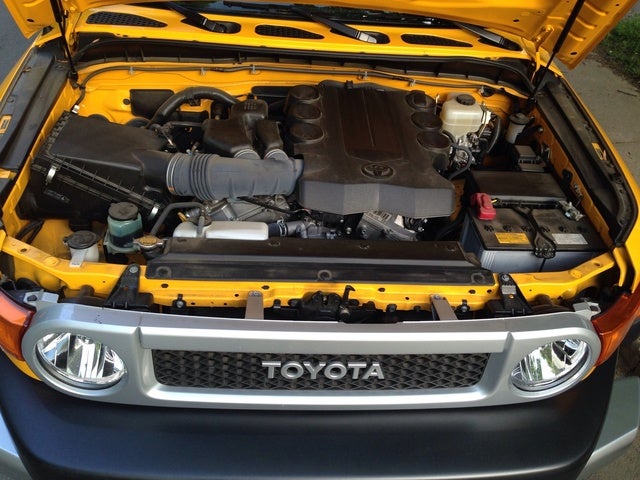 For 2010 Toyota has upgraded the FJ Cruiser’s 4.0-liter V6 engine with dual variable valve timing. Called i-VVT, the system bumps up output to 260 hp and 271 lb-ft of torque. With plenty of power on tap, the FJ Cruiser accelerates briskly, and the gentle throttle tip-in is suited to off-road use. Passing power is very good, especially when compared with the dreadfully slow Jeep Wrangler, but the FJ’s fuel economy is severely hampered by its high curb weight; full-time 4WD models can manage only 15 mpg in the city and 19 on the highway.

While all FJ Cruisers share the same engine, buyers can choose from three different transmission and transfer case setups. RWD FJ Cruisers get a five-speed automatic transmission and a limited-slip differential. 4WD trims with the six-speed manual gearbox use a sophisticated full-time transfer case that can also operate in low range, while automatic-equipped 4WD FJ Cruisers get a simpler, part-time arrangement that can be controlled from the cabin.

The 2010 FJ Cruiser utilizes a double-wishbone style front suspension that features plenty of travel for off-road articulation. The rear suspension is a multi-link setup with coil springs and a stabilizer bar. While this fully independent construction may sound unusual to off-roaders used to live axles and leaf springs, it performs admirably in the muck, allowing the FJ Cruiser to perform feats that would cripple a lesser SUV. The 9.6 inches of ground clearance (on 4WD models) allow plenty of margin in negotiating culverts or rock gardens, but can make entry to the rear seats difficult.

On the road the FJ Cruiser delivers an acceptable level of control; though its center of gravity is high, the wide track and sophisticated suspension prevent the SUV from feeling tippy. Though not jarring, the ride is rather rough, especially with the off-road TRD package. On the highway every expansion joint is felt, and its boxy profile makes the FJ Cruiser somewhat susceptible to crosswinds.

The unusually wide cabin of the FJ Cruiser has plenty of elbow room, and even three passengers fit comfortably in back. The rear bench has decent legroom, but access through the clamshell half doors is hindered by a narrow opening and a tall ride height. Front seats are firm and aggressively bolstered, with a chair-like seating position. Visibility out of the FJ Cruiser’s abbreviated greenhouse is poor; the gun-slit windshield and thick C and D pillars conspire to limit the view and make parking tricky.

FJ Cruisers embrace the retro look inside, with a blocky, straight-across dashboard and large, simple controls. In keeping with Toyota’s practice of building well-equipped base cars with a minimum of options, the 2010 FJ Cruiser basically comes fully equipped. Power windows, door locks, and mirrors are standard, as are CFC-free air conditioning and an AM/FM/CD stereo with AUX input jack. Other standard goodies include a rear defroster, adjustable folding cloth seats with special water-resistant upholstery, and rear cargo tie-downs. The only interior options are an upgraded stereo with a 6-CD changer and subwoofer and a slick back-up camera that is displayed in the center rear-view mirror.

The 2010 FJ Cruiser gets dual front, side, and curtain airbags along with active head restraints to reduce whiplash in rear-end collisions. Four-wheel vented disc brakes feature both antilock control and electronic brakeforce distribution. The four-piston front and two-piston rear calipers are more than up to the task of halting the FJ Cruiser’s two-ton bulk; stops from 60 mph were measured in less than 125 feet.

In Insurance Institute for Highway Safety (IIHS) crash testing, the 2010 FJ Cruiser received the top rating of Good in both front and side impact categories. The results from Federal NHTSA tests were also good; the FJ earned five stars for driver frontal impacts and four stars for the front passenger.

Nearly all FJ Cruiser owners report being impressed by the SUV’s considerable off-road talents. The retro styling was another strong selling point, and more than one owner mentioned their FJ got some admiring looks in traffic. The added power of the V6 engine was much appreciated, but many owners complain about the FJ Cruiser’s seemingly unquenchable thirst for fuel.

What's your take on the 2010 Toyota FJ Cruiser?

jeanrobertlachance One of the best overlander

Users ranked 2010 Toyota FJ Cruiser against other cars which they drove/owned. Each ranking was based on 9 categories. Here is the summary of top rankings.

Have you driven a 2010 Toyota FJ Cruiser?
Rank This Car

Can this bolt be removed and replaced if so any advice would be great.

I Have An Issue With The Middle Instrument On Top Of The Dash. It Normall...

I have an issue with the middle instrument on top of the dash. It normally is the readout for outdoor temperature. It still had that information but below the word "outdoor" is flashing "compass"...

will you notify me when a particular vehicle comes on market

Vehicle Needs A Jump To Start And Go.

what affects does using the valet key long term on my 2010 4wd fj have on the vehicle.Have been told it affects the mileage.