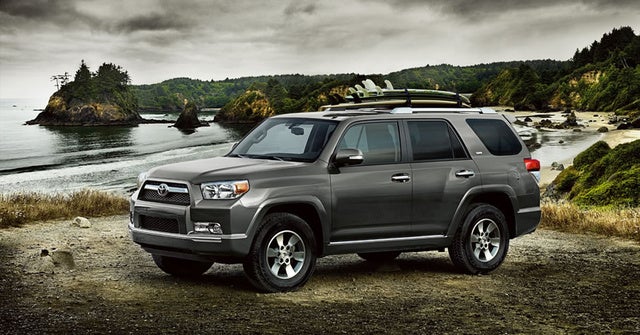 A significant redesign for 2010 has resulted in marginally better road manners, while off-road toughness, overall build quality, plenty of cargo room, and loads of standard features are among the goodies the Toyota 4Runner brings to the table.

Still-touchy on-road handling, a hefty pricetag, and the dropping of the V8 engine, as well as its uninspired four-cylinder replacement, won’t win the 2010 4Runner a whole lot of new friends.

For those inclined to take the overland route, the 2010 Toyota 4Runner would be the vehicle of choice. A peppy V6 gives this SUV plenty of power and reasonable fuel efficiency, but its truck-like demeanor on neighborhood streets and busy highways might make commuters and families shy away.

Though getting a bit long in the tooth, the 2010 Toyota 4Runner refuses to show its age – much. One of the original SUVs, this four-door, five-passenger off-road demon has counted nearly constant upgrading and a plethora of standard features among its strengths, while heavy handling and sexist styling are among its traditional weaknesses. Though redesigned for 2010, with a longer, bulkier look and a taller stance, the 4Runner remains a terrain-taming sport ute that, though not totally out of place on the highway, especially during the winter commute, will never be truly comfortable on pavement. Some additional tweaking has made this a somewhat more fuel efficient vehicle, with variable valve timing integrated into both the new-for-2010 inline four-cylinder (I4) powerplant and the potent V6. An unfortunate development, however, is Toyota’s decision to drop its well-regarded V8 for this model year.

The 2010 4Runner is available in three trims, the base SR5, trail-friendly Trail, and the high-end Limited. Both the SR5 and Limited trims are available with either rear-wheel drive (RWD) or part-time four-wheel-drive (4WD). The Trail, which replaces the 2009 Sport Edition, is delivered only with 4WD and can be delivered with the mountain-leveling Kinetic Dynamic Suspension System (KDSS). The Limited additionally sports standard X-REAS suspension dampers to smooth out the roughest of goat paths while providing a modicum of decorum on the highway. Passenger and cargo space are deemed better than adequate in all trims, with 90 cubic feet of cargo capacity available when the rear seats are folded down. Of course, the 2010 4Runner reflects the uncommon build quality that Toyota is known for and has thus far been untainted by the automaker’s recent safety troubles.

For getting to the top of the mountain firstest with the mostest, the 2010 4Runner gives Dodge’s Durango, not to mention the Ford Explorer and Nissan Pathfinder, as well as Jeep’s Commander and Grand Cherokee troopers more than a run for their money. This mountain goat doesn’t come cheap, though, and is coveted mainly by those with destinations well off the beaten path in mind. 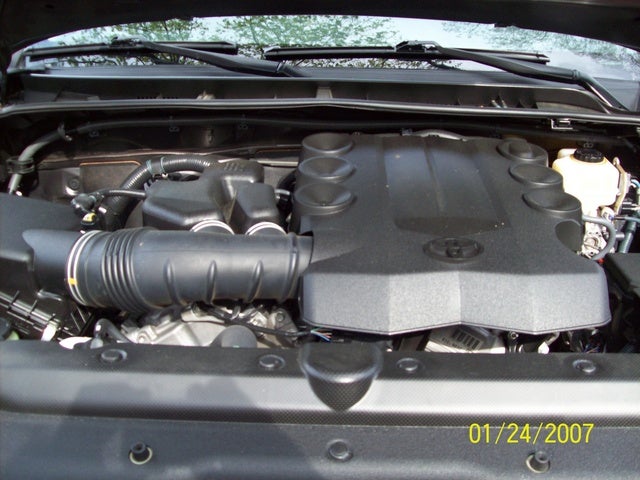 For the first time since 2002, a four-cylinder engine is available in the latest 4Runner, though several reviewers find the substitution of an I4 in only the base RWD SR5 trim for the erstwhile V8 to be a mystery. In any case the new 2.4-liter I4, when under the management of its somewhat antiquated four-speed automatic transmission, is capable of some 157 hp at 5,200 rpm and 178 lb-ft of torque at 3,800 rpm. Towing capacity is limited to a max of 2,000 pounds, while variable valve timing allows for an EPA-estimated 18/23 mpg.

Boss engine for the 4Runner is now the 4.0-liter variable-valve-timed V6 that, along with its accompanying five-speed auto-manual transmission, puts out 270 hp at 5,600 rpm and 278 lb-ft of torque at 4,400 rpm. Capable of towing 5,000 pounds when properly equipped, the V6 is available for the RWD SR5 trim and standard with the SR5 4WD, Trail, and Limited trims. Mileage is estimated at 17/23 in RWD trims and 17/22 in 4WD versions.

Reviewers lament the re-introduction of the underpowered and inefficient I4 powerplant and the past-its-prime four-speed automatic, and thus are confident that the V6 will be the overwhelming choice of those opting to purchase the 2010 4Runner. This highly regarded V6 is found to be more than equal to its task, with one test claiming a time of 8.2 seconds from 0-60. Many reviewers find fuel efficiency to be tepid at best with either engine, though little is lost efficiency-wise in selecting the up-powered trims.

With a double-wishbone front independent suspension, front and rear stabilizer bars, and solid live-axle rear suspension, a number of reviewers note some wallowing and a disturbing side-to-side wandering with the 2010 4Runner at highway speeds. Uneven pavement seems to be well-controlled, according to most reviewers, especially with the Limited’s standard 20-inch wheels. All other trims roll on standard 17-inch tires.

Overall on-road handling disappoints some reviewers, with rude steering leading to noticeable body lean even in modest cornering. Others claim, however, that the recent redesign has resulted in a noticeable improvement of the 4Runner’s road manners, with at least one reviewer mentioning that, with its truck-inspired chassis, the 4Runner will never be particularly highway-friendly. Standard X-REAS suspension damping in the Limited trims and the Trail’s available KDSS, which disconnects and reconnects the front and rear stabilizer bars at speeds under 40 mph for better wheel articulation over especially rugged terrain, are definitely worth the money. A few reviewers have, however, mentioned that braking is among the 2010 4Runner’s weaknesses, with significant noseplow during even the most innocuous of stopping situations.

Despite its iffy highway manners, this surefooted trekker shows its true colors off-road, with standard skid plates and 9.6 inches of ground clearance ensuring, by all reviewer accounts, a safe and intriguing journey on the path less traveled. The Limited’s 20-inch wheels are particularly well adapted for the backcountry, though, curiously, all-terrain tires are not available from the factory for any 4Runner trims.

Options for the SR5 include several of the standard items delivered with the higher trims, as well as leather-appointed upholstery, remote start, and third-row seating. Touch-screen DVD navigation and trim-specific badging is available with the Trail, and the Limited offers available headed third-row seating.

Reviewers look favorably on the various accoutrements offered with the 2010 4Runner, though more than a few are not impressed with the location of the USB connection inside the glovebox. Gauges are large and easily readable, and controls are simple and logically placed. Seating in the available third row is described by most reviewers as cramped, at best, but leg- and headroom are noted as more than adequate in the front and standard rear seats, and all seats are described by the majority of reviews as supportive and comfortable. Virtually all reviewers additionally mention that the 4Runner’s tall stance and lack of running boards can be challenging for those with short legs.

Owner comments regarding the 2010 Toyota 4Runner seem evenly split between pro and con. Downsides to this trail-ready mini-tank, according to many owners, include still-jittery on-road behavior, no available running boards, a dearth of interior storage, and the lack of interior access to the gas cap. Some interior quality issues concern a few owners, while virtually all owners complain about the 4Runner’s poorly designed available rear cargo deck. Owners seem split regarding exterior styling, with some praising its macho look, and others complaining that it’s not particularly woman-friendly.

Positive comments from owners include thoughts about the 4Runner’s brisk acceleration and adequate towing capacity with the V6 engine, as well as its comfortable seating, tolerable mileage, capable ride, and, of course, the 4Runner’s awesome off-road performance. Individual features, such as the JBL audio system, Bluetooth communications, and push-button start, are especially appreciated by a number of owners.

Have you driven a 2010 Toyota 4Runner?
Rank This Car

My 2010 4Runner V6 4WD slip yoke (on the driveshaft) was greased to stop some minor driveshaft problems. After it was greased, everything felt perfect, like new. But after a few days, the same iss...

I have a 2010 Toyota 4Runner Trail and the horn stopped working.

Is There A Way To Save Money On Tires For A 2010 Limited Toyota 4runner?

The 4runner I am getting will need new tires soon. At Sam's they will be $600 for a 20in tire. Any way to save on the cost by getting smaller tires? Any advice would be amazing. I am a minivan mom...