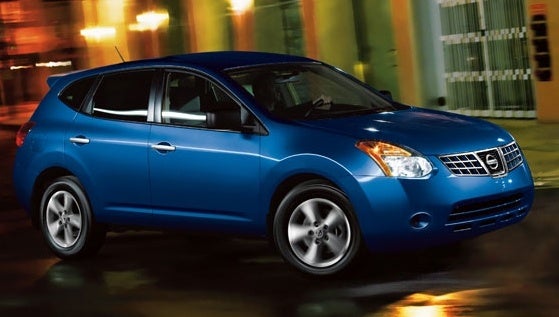 Upscale looks and European driving dynamics set the 2010 Nissan Rogue apart from an ever-increasing field of small crossovers, and its small yet responsive engine and CVT transmission combine for decent performance and excellent fuel economy.

A smallish rear seat and cargo area and no V6 engine option mean buyers looking for lots of space and power should shop elsewhere than the 2010 Rogue.

Fundamentally unchanged for 2010, the Rogue continues to woo buyers with uncommon panache and accomplished road manners. Aimed squarely at young families, this five-door, five-passenger crossover is a credible alternative to the segment-leading Toyota RAV4 and Honda CR-V. Interior and exterior design is fresh and well executed, but leaves less room for passengers and cargo than its more traditional-looking competition.

Introduced in 2008 and sharing a platform with the Sentra compact, the Rogue has been a strong seller for Nissan since its debut. Styled in the mold of its larger Murano sibling, the Rogue impresses with a clean, well-integrated look inside and out. Nissan's cute-ute is available in three trim levels (S, S Krom, and SL) and can be had with either front- or all-wheel drive. An efficient inline-four engine and novel CVT transmission combine with a curb weight of only 3,280 pounds to elevate fuel economy to near the top of its class.

S models are decently (if not lavishly) equipped with cloth seats (buckets up front and a split-folding bench in back), air conditioning, power windows, locks, and mirrors, cruise control, and a four-speaker CD stereo. The S Krom is designed for the aspiring fashionista and sports unique front and rear spoilers with integrated foglights, 17-inch brilliant-finish alloy wheels, and a sport-tuned exhaust. The top-of-the-line SL trim adds 17-inch alloys (without the glitzy finish of the Krom), a trip computer with outside temperature readout, and integrated roof rails. Leather seats, a 6-CD changer, a power moon roof, HID headlights, and Bluetooth connectivity are all available as part of five option packages.

The small SUV market is proving to be both lucrative and highly competitive. Toyota and Honda got a head start with their best-selling RAV4 and CR-V. Nissan may have taken its time to bring the Rogue to market, but it made sure it was ready for prime time. 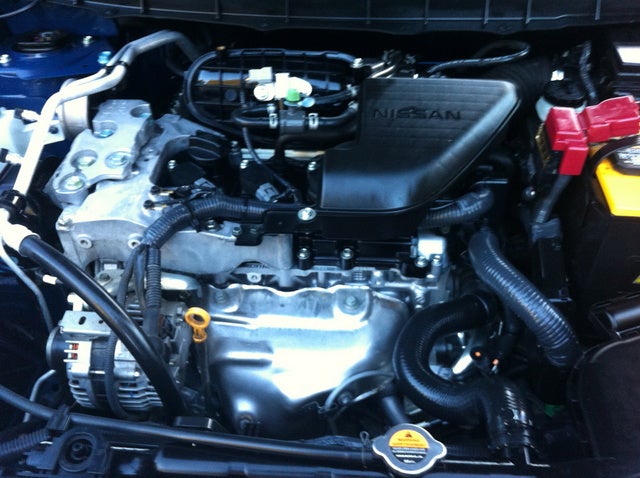 A 2.5-liter DOHC inline-four is the only engine offered in all three Rogue trim levels. Large for a four banger, this motor packs 170 hp and 175 lb-ft of torque. Variable valve timing and direct injection are standard and help maximize power and efficiency.

Front-wheel-drive (FWD) versions will run from 0-60 in 8.6 seconds and dispatch the standing quarter-mile in 16.4 seconds at 85 miles per hour. All-wheel-drive (AWD) trims are a bit slower in both tests, owing to their increased weight and added friction from the driveline. The engine is reasonably smooth and sonorous, but doesn’t quite deliver the amazing silkiness that Honda and Toyota buyers take for granted.

Nissan has been a pioneer in promoting the concept of a continuously variable transmission (CVT), and all Rogue models are fitted with this gearbox as standard. For the unfamiliar a CVT is a type of automatic transmission that uses belts or chains, rather than gears, to keep the engine in its optimum RPM range. The driving experience of a CVT may take some getting used to; there are no clearly defined shift points and none of the attendant back-and-forth lunging as the car moves through the gears. Power is delivered in an uninterrupted surge from idle all the way to redline. It may feel different at first, but the CVT pays real dividends in fuel economy and our bet is that most drivers will quickly adapt.

Standard FWD trims are likely to provide adequate traction, but for those who reside in the Snow Belt, Nissan makes all-wheel drive an option on all Rogue trim levels. The so-called Intuitive AWD is an electronically controlled system that can divert power to the rear wheels when needed. Like most such systems it is completely automatic and is best suited to slippery conditions on pavement, rather than serious off-roading.

The Rogue rides on a modified platform from Nissan's Sentra compact. As such it delivers the car-like ride and ease of handling most small SUV buyers want. The fully independent suspension features MacPherson struts up front and a multilink setup in back that strikes a good balance between performance and comfort. Body motions are well controlled for an SUV, with only moderate lean and a secure, planted feel.

The electric power steering offers variable effort that is fingertip-light at low speeds but tightens up at higher velocities for better control. A full range of electronic aids (traction control, ABS, and stability control) ensures that even when pushed the Rogue’s handling remains predictable.

While it doesn’t deliver the cloudlike ride of say, a Hyundai Santa Fe, the Rogue’s modern suspension and long wheelbase help ensure that road imperfections aren’t intrusive. Noise and vibration dampening are good, but some wind noise and tire roar means that it doesn’t quite match up with the class leaders.

Braking is provided by a four-wheel, ventilated disc setup with antilock standard across the range. Stopping distances were adequate at 121 feet from 60 miles per hour, and pedal feel is good, but some were put off by unpredictable ABS engagement.

Nissan made interior design a focal point of the Rogue, so the contours and textures are pleasant to the eye and have an expensive feel. Plastics fit well, and the buttons and stalks move with a satisfying click. The high driving position and abundance of glass make for an expansive view, with the exception of a big blind spot caused by the large C-pillars. Ergonomics are good, with most primary and secondary controls easily operable and well placed. The steering wheel is adjustable for rake but not reach.

Front seat space is generous, with 42 inches of legroom, but be aware that the basic S trim comes only with a four-way manual seat adjustment that may not provide enough range for all drivers. The cloth upholstery is tasteful and seems hard-wearing but the optional leather is not as supple as in some recent offerings from Toyota.

Rear seat space is marginal at best. The bench is narrow and quite cramped across the shoulders with three passengers. Legroom is tight as well at 35.3 inches, just 3 more than are offered in a typical economy-class airline cabin. The tapered profile does encroach a bit on rear-seat headroom, but it’s the cargo compartment that suffers most with 28 cubic feet of capacity, 8 less than the RAV4. Although the seats do fold flat, this is not the vehicle to take on a long road trip with the family.

A slew of storage cubbyholes and a large glovebox are sure to appeal to today’s families. Cupholders are numerous and generously sized, though some complained of inconvenient placement. Also inconvenient is the overly complicated keyless start system that’s optional on SL trims. Nissan (along with many other automakers) has convinced buyers that placing a key in the ignition and twisting it is old fashioned, and in doing so has made cranking your car about as exciting as turning on a computer. Also, the replacement of a keyless starting fob can be shockingly expensive and require dealer reprogramming; wise buyers will pass on this option.

Befitting its status as a family vehicle, the Rogue has a full complement of safety and security features. The dual front airbags are augmented by side impact curtain bags, standard ABS with electronic brakeforce distribution, and standard traction/stability control. In IIHS and Federal crash tests the Rogue has consistently garnered top marks for crashworthiness.

Owners praise the Rogue for its lively performance and seamless operation. Handling and responsiveness are particularly strong points. Fuel economy also earns high marks, and positive comments about the styling and interior appointments abound. Safety is cited by many owners as a major factor in their purchase decision, underscoring the importance of protection to young families.

Negative comments center on poor rear visibility and blind spots, and many find the Rogue tricky to park. Also panned is the high cost of options and Nissan's insistence on bundling many options together in pricey packages. Finally, some owners complain about the lack of an optional navigation system, a glaring omission in today’s marketplace.

Have you driven a 2010 Nissan Rogue?
Rank This Car

While driving on the highway at speed my Rogue will decelerate and no longer respond to my pressing the gas. I have noticed that it seems to also not want to accelerate after driving for long peri...

8 views with 3 answers (last answer about a month ago)

Help Me Find The Name Of This Piece Please?

9 views with 4 answers (last answer about a month ago)

WHERE IS STARTER RELLY FOR 2010 NISSAN ROUGE

Do I Need To Change Transmission Filter