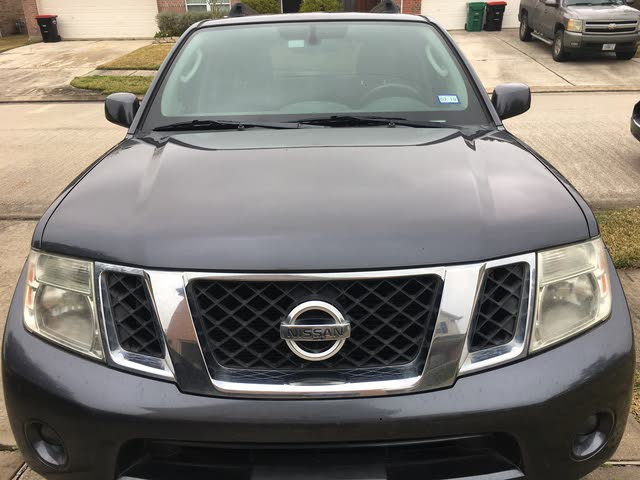 The 2010 Nissan Pathfinder serves as a solid example of a traditional truck-based SUV, with plenty of power, comfort, and cargo room to go around.

The fuel economy of the 2010 Pathfinder is terrible, even for a full-size SUV.

While far from the most efficient example of a full-size SUV on the market, the Nissan Pathfinder is a competent option in the class. While some complain about a lack of refinement in its ride and handling, it still outperforms many similar vehicles and comes in a package that consumers seem to like. The V6 provides as much power as you’ll need, so don’t bump up to the V8 unless your hauling and towing needs won’t be met by the smaller powerplant.

For the first four years of its life, the Nissan Pathfinder was a compact, two-door SUV, eventually morphing into the full-size, four-door offering we find on showroom floors today. The Pathfinder has remained virtually unchanged since its refresh in 2008, a year that also added the option of a V8 engine.

The seven-passenger 2010 Nissan Pathfinder comes in S FE, S, SE, and upscale LE trims, the LE offering the option of a 5.6-liter V8 engine, and all trims come with a five-speed automatic transmission. The previously available SE Off-Road trim has been discontinued for 2010. 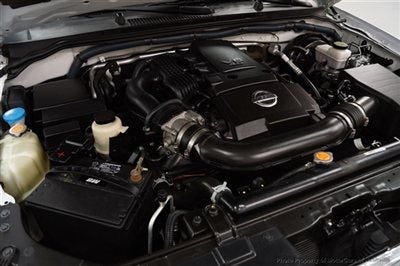 The base Pathfinder engine is a 4.0-liter V6, and with 266 hp and 288 lb-ft of torque, it’s capable of 0-60 times under 8 seconds. While the five-speed transmission can be reluctant to downshift, power is adequate both around town and on the highway. The V8 offers almost 50 additional hp and an extra 100 lb-ft of torque, which are noticeable. Both engines require premium fuel and return an EPA estimated 14/20 mpg and 13/18, respectively.

While the S FE comes only in a rear-wheel-drive (RWD) configuration, with further drivetrain adjustments to increase fuel economy, the SE and LE V6 trims come with either RWD or four-wheel drive (4WD), with the S and LE V8 trims available only in 4WD, although only the LE trims come with an All-Mode 4WD system that can be left engaged on dry pavement. Maximum towing capacity for the V6 is 6,000 pounds, with the V8 topping out at 7,000 pounds.

While the Pathfinder ditched the traditional ladder-type body-on-frame design for a unibody a while back, it’s still a truck-based SUV and handles as such. This is made increasingly evident when compared to the myriad crossover SUVs available today, which handle turns and absorb road inconsistencies with a flair and composure the Pathfinder doesn't have. It’s not sloppy, and it’s not dangerous, it’s just a truck-based SUV, so you’ll get the body lean, slight noseplow, and wide turning radius that are quickly going extinct in other models. The LE’s 18-inch wheels and tires are the worst of the bunch, magnifying all the worst characteristics with regard to the Pathfinder’s ride.

Still, among its class, it’s not the worst, and even could be considered a bit above average, with responsive steering and confident braking. Not bad for an old boy.

Space is ample front and back, even for those over 6 feet, although the front seats will need to be pushed forward when larger adults occupy the rear. Headroom is even available in abundance, and despite a high step-in for entry, the running boards and grab handles make it less of an issue than would be expected. Seats provide support and comfort, enough for long trips with little or no back fatique.

Controls receive similar attention, with little complication or flash. Well-placed and easy to read, even the available navigation system puts functionality at the forefront, a welcome change over many other systems.

A Premium Journey Package for the SE trim adds a rearview camera, automatic headlights, roof rack, an automatic rearview with compass, a garage door opener, keyless access and start, and a Bose satellite-ready 6-CD changer and MP3 player with Bluetooth.

While the Pathfinder’s six standard airbags, antilock four-wheel disc brakes, and anti-skid system have garnered it a five-star rating in all of the NHTSA’s impact tests, it has earned a compartively abysmal three-star rating for rollover.

Despite some claims heard regarding the five-speed transmissions, the bulk of comments regarding both drivetrains have been positive, excepting where efficiency is concerned. Overall comfort as well as fit and finish have seen plenty of positive remarks, although some have commented on a slightly cheap look for the interior. Negative comments on its overall ride have been made, and those will only increase as crossovers become the norm.

What's your take on the 2010 Nissan Pathfinder?

Have you driven a 2010 Nissan Pathfinder?
Rank This Car

Do U Have Any Other Lenders Besides The Two U Show

Some People, like myself our incomes don't go with the Questions asked. People can not provide their information correctly. The same with the question rent - own- other. Suppose the person buying pr...

Ok so I have a 2010 Nissan Pathfinder that, before it was mine, it was unfortunately my husband's (originally, it was my husband's mother's, she babied it and took it to the dealer for any and everyth...

2010 Nissan Pathfinder Not Cranking. New Battery. After A Few Tries, It W...

I just need to know where the pump is located if possible????!

Finding small fragments of copper wiring under the hood in all places... looks like it is disintegrating and spraying randomly