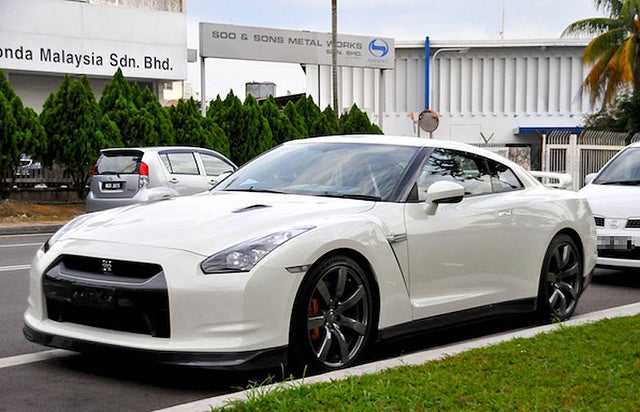 There was a lot of noise after the release of the Nissan GT-R last year. Motor Trend named it the “2009 Car of the Year.” Similarly, Automobile magazine chose it as its 2009 “Vehicle of the Year.” At the same time, a lot of ham-fisted, lead-footed street racers decided that mashing the accelerator with the Launch Control activated and the Vehicle Dynamic Control (VDC) turned off was a great idea. This resulted in two things - slightly faster quarter-mile times, and dozens of damaged transmissions.

So, what to do? Well, Nissan did a lot. For 2010, the GT-R is getting 5 extra horsepower, a retuned suspension with redesigned Bilstein shocks, sturdier brake lines, extra airbags, new colors for the paint and wheels, and new programming for the Transmission Control Module (TCM) to combat the aforementioned transmission issues, not to mention an extra four grand on the sticker.

Just like previously, the GT-R is available in Base and Premium trims, both powered by a 3.8-liter, twin-turbo V6 that now produces 485 hp. With the new programming for the TCM, the GT-R launches at 3,000 rpm instead of 4,500, for increased durability as well as decreased acceleration times, even with the VDC activated, within a tenth of a second or two of the previous system, and no broken gears. Power is delivered to all four wheels through a dual clutch rear transmission, operated by paddle shifters. The retuned suspension has received a new valve body design and revised spring and damper rates. The Base trim gets a new darker, “high-luster” finish for the 20-inch forged aluminum alloys, while the Premium trim gets a “near black” finish. A new Special Super Silver Paint is a $3,000 option, one of only two, the other being a no-cost Cold Weather Package that comes with a polished front bumper.

Finally, if you’re game to swallow a base sticker price in excess of eighty grand, you’ll get one more amenity - a master technician at your Nissan dealer dedicated to GT-R service, one of the many sales, service, and facility commitments Nissan requires of certified dealers in order to sell the GT-R. Happy launching!