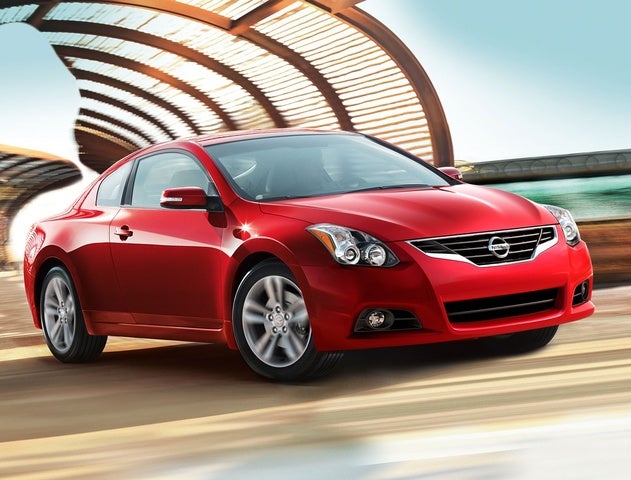 Scads of comfort and convenience amenities, a sporty design and solid construction, pleasant pricing, and responsive handling all make the 2010 Nissan Altima Coupe a worthy addition to the Altima family.

An all-but-nonexistent trunk, cramped rear quarters, some questionable technological improvisations, and a less-than-understandable options structure might lower expectations a bit for the 2010 Altima Coupe.

The 2010 Nissan Altima Coupe emphatically boosts the fun level for the daily commute or the cross-country odyssey. Lively handling, potent performance from each of the standard engines, and the looks of a supermodel put a little pizzazz and a lot of value into this small package. Just don’t plan on ferrying a lot of passengers or cargo.

Occasionally accused of being a downsized Maxima, the 2010 Nissan Altima Coupe comes loaded with value, style, sportiness, and, for those who are tired of hauling family, friends, and cargo all over town, a small backseat and downright miniscule trunk. This five-passenger coupe takes its name and its fame, obviously, from Nissan’s marquee sedan, but with a twist to its standard drivetrain features. Options packages, a disappointing imbroglio with the Altima sedan, are no less confining and no less expensive with the Coupe, but the driving excitement is most definitely ratcheted up a notch or two.

With the deletion of the 3.5 SE trim for 2010, the Altima Coupe is available in essentially two trim levels, the 2.5 S and the 3.5 SL’s replacement, the 3.5 SR. In an effort to heighten the distinction between family-oriented sedan and somewhat more individualistic coupe, both trim levels are delivered with a standard six-speed manual transmission. However, cooler heads prevailed at Nissan, which additionally offers both trims with an available continuously variable (automatic) transmission (CVT), which is a tad easier on the nerves when driving in the big city and also marginally increases gas mileage. The entire Altima lineup is available only with front-wheel drive.

Though essentially a carryover from 2009, some tweaks to the 2010 Altima Coupe include a redesigned front fascia, standard stability control, Bluetooth streaming audio capability, and USB-enabled digital music storage. As a latecomer to the Altima family, having debuted for the 2008 model year, this spiffy coupe has earned its unique place at the table as it gives pause to such competitors as the Ford Focus, Honda Accord, and Chevy Cobalt. 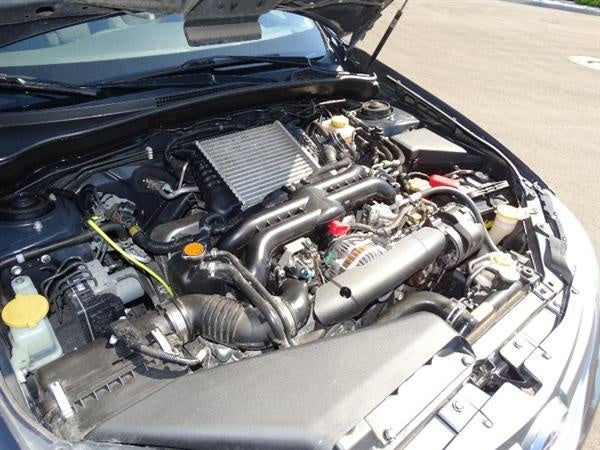 Powertrains for each of the 2010 Altima Coupe trims are easily determined just from their names. The base 2.5 S packs a 2.5-liter variable-valve-timed (VVT) inline four-cylinder (I4) engine that comes with the standard-issue six-speed manual transmission to produce 175 hp at 5,600 rpm and 180 lb-ft of torque at 3,900 rpm. EPA estimates for the stick-shift I4 call for 23/31 mpg. Also available with the 2.5 S is the CVT automatic-style transmission, which marginally increases gas mileage to 23/32. Time was when a stick shift always got better mileage than an automatic transmission, but the times they are a-changin’.

Most reviewers find the CVT a good fit with either the I4 or the V6 powerplant. Acceleration is adequate with either engine, no matter the transmission, but things get downright exciting behind the wheel of the CVT-equipped 3.5 SR, which did 0-60 in 6.7 seconds in one test. Though the six-speed manual transmission gives the Altima Coupe the expectation of over-the-top sportiness, a number of reviewers find it to be too finicky and sloppy, even occasionally jerky, thus depriving drivers of the true nature of a slick-shifting stick.

For 2010, the Nissan Altima Coupe sports a four-wheel independent suspension, with MacPherson front struts, front and rear stabilizer bars, and a multi-link rear suspension. The 2.5 S rides on 17-inch aluminum alloy wheels, while the 3.5 SR boasts 18-inch alloys. All this combines to create what virtually all reviewers claim is one nimble and fun automobile to take through its paces.

Though the 2.5 S trim is nimble enough for many, its softer suspension also makes for what reviewers note is a more comfortable ride, even over rougher surfaces. The 3.5 SR’s standard sport-tuned suspension, featuring beefier shocks and struts, as well as heftier stabilizer bars, gives a better feel for the road, according to most reviewers, but drivers would be well-advised to refrain from taking a sip of hot coffee when hitting rough spots in the pavement.

Brakes on the Altima Coupe are described by professional reviewers as powerful and true, though some have noticed a tendency in the pedal to grab a bit harsher than intended in some cases. Steering is also claimed by reviewers to be alert and responsive for the most part, but drivers should be aware of some lightness at highway speeds. Happily, those few handling glitches noticed by reviewers are in the nature of unmet performance expectations as opposed to safety issues. 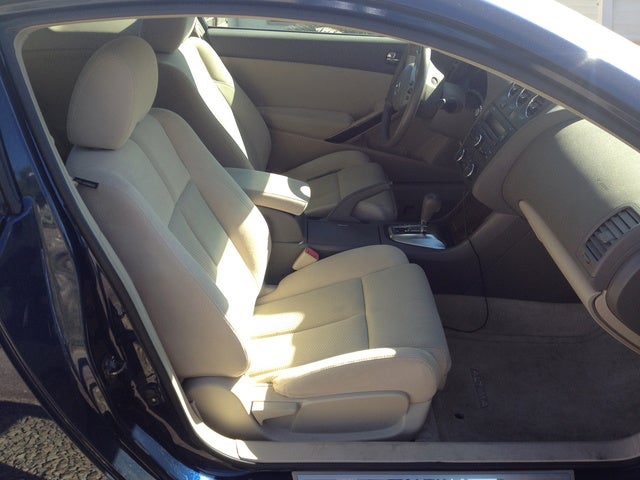 When it comes to options, the Altima lineup, certainly including the Coupe, offers mainly expensive packages, leaving some prospective buyers having to get extras they may not want.

In any case, options packages for the Altima Coupe include the Convenience Package, targeted toward the 2.5 S trim, which features remote window operation with the Intelligent Key system, power driver’s seat, leather-wrapped steering wheel, wood tone dash and door trim, and steering-wheel-mounted audio controls. For both trims there is the Premium Package with nine-speaker Bose premium sound, satellite radio, rearview camera, Bluetooth hands-free phone, and dual-zone automatic climate control. This package, when configured for the 2.5 S also offers the power moonroof and turn-signal-integrated mirrors. Also available for both trims are the Leather Package and the Technology Package, with the former offering leather-appointed upholstery, premium metallic dashboard trim, heated front seats, and a universal remote garage door opener, and the latter boasting DVD navigation, rear-seat DVD entertainment, and streaming audio with Bluetooth technology. Some of the few stand-alone options for the Altima Coupe include a rear spoiler, front and rear floormats, and aluminum kick plates.

Most reviewers find the Altima Coupe’s cabin to be well designed, with logically placed controls, easy to read gauges, and plenty of front head- and legroom. There are a couple of reviews, however, that indicate Nissan may have taken the low road as far as some cabin materials and plastic pieces are concerned.

The National Highway Traffic Safety Administration (NHTSA) gives the Altima Coupe five stars for side impact and rollover protection, but only four stars in front impact testing. The Insurance Institute for Highway Safety, on the other hand, gives the Coupe its highest rating of “good” for front and side impact protection, but only its second-highest rating of “acceptable” for roof strength.

The 2010 Nissan Altima Coupe’s cramped rear passenger space and miniscule trunk seem to be both a blessing and a curse, depending, apparently, on the driver's willingness and capability to haul friends, family, and luggage all over creation. A few technological glitches have been mentioned by some owners, as has iffy seat comfort, the lack of imagination in Nissan’s choice of cabin trim materials, and a sometimes disturbing ruckus from the I4 engine on acceleration. Owners are also in complete agreement with most reviewers that the options structure for the entire Altima lineup could be a bit looser and considerably less costly.

Sporty looks, able handling characteristics, and plenty of power are all lauded by owners of the 2010 Altima Coupe, as is the I4’s downright miserly gas mileage. Such individual items as push-button start and the available Bose premium audio system also draw kudos from owners. Finally, owners praise the Altima Coupe’s ride comfort, which adds immeasurably to its well-recognized value.

What's your take on the 2010 Nissan Altima Coupe?

Have you driven a 2010 Nissan Altima Coupe?
Rank This Car

Hey guys I have a 2010 2.5 Nissan Altima Manual Transmission Coupe. Over the last 6 months I have slowly replaced basically everything but the engine and tranny. I now have the opportunity to engi...

89 views with 1 answer (last answer about a year ago)

What Is The Following Light Problem. VDC Off Slip

The VDC off and slip lights are lit. What does that mean?

Car Did Not Accelerate When Pushing Gas Pedal

I was in drive and when the light turned green I pushed my gas pedal to accelerate. My gas pedal went all the way down to the floor with no response. After 3 seconds my car accelerated (I had my foo...