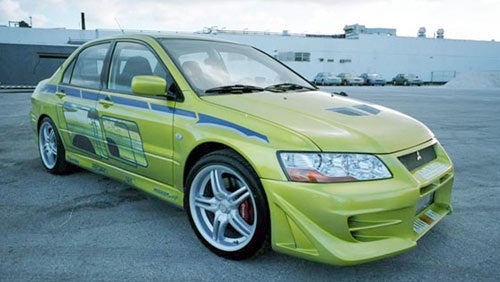 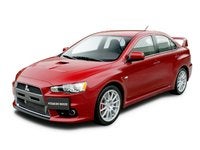 The power of the 2010 Mitsubishi Lancer Evolution’s turbocharged 2.0-liter engine and the capability of its suspension provide race-ready performance off the lot.

It’s 2010, and the Lancer Evolution’s engine sounds strained, its automatic needs lessons in grace, and its suspension fails to understand the meaning of subtlety.

The 2010 Evolution is a strong performer that needs little to be a great contender. No one expects a plush ride from a machine such as this, but there are still issues that hold the Evolution back from really standing in the same class as the WRX, for example. The Ralliart offers a better compromise without the harshness or the steep pricetag of the Evolution – it’s simply a better buy.

Mitsubishi’s production racer, the Lancer Evolution, returns in 2010 after disappearing in 2009 following its tenth-generation debut in 2008. This AWD compact is offered in three trim levels, the MR, GSR and MR Touring, all powered by the same turbocharged 2.0-liter engine. With the option of a five-speed manual transmission in the entry-level GSR or Mitsubishi’s new Twin Clutch Sportronic Shift Transmission (TC-SST) in the MR trims, drivers can choose anything from a sporty roundabout to a rigid racer ready for the track.

Considering its absence in 2009, technically everything is new for 2010, but looking back to 2008, the real news is the brand-new MR Touring trim, which comes standard with a power sunroof, unique leather upholstery, heated power mirrors, and rain-sensing wipers.

The all-new aluminum MIVEC4 engine is a turbocharged 2.0-liter four, putting out 291 hp at 6,500 rpm. Its 300 lb-ft of torque come in at 4,400 rpm, providing strong power even before the turbocharging takes over, but when it does, the Evolution pushes you back into your seat with aggressive enjoyment, with a turbo whine that drowns out the unattractive engine screaming somewhat.

The GSR’s five-speed is smooth and competent, overshadowing the sometimes inelegant operation of the MR’s six-speed automatic. With options for manual and automatic operation, the former with the use of paddle-shifters, the TC-SST has three modes – Normal, Sport, and S-Sport – each providing increasingly quick and aggressive shifting. Sadly, even Normal mode fails to provide an adequately reserved around-town experience, making the manual the preferred transmission, even with its predictably stiff clutch.

The Evolution has a 14.5-gallon tank, as opposed to the 15.3-gallon unit found in most other Lancers, and with an already reduced fuel economy, the length between pit stops is significantly reduced. EPA estimates peg the GSR at 16/22, with the six-speed of the MR trims only offering 1 additional mpg around town. Couple this with the required premium-grade gasoline, and the Evolution quickly becomes an enthusiast vehicle.

The Evolution gets a sport suspension that is quite capable, although slightly stiff. 18-inch Enkei wheels come with the GSR trim and are controlled by the Evolution’s Super All Wheel Control (S-AWC) drive system, the avenue Mitsubishi has utilized for its deluge of letters – and aggressive Sport ABS system, Active Stability Control (ASC), an Active Center Differential (ACD), and Active Yaw Control (AYC). The S-AWC system has settings for three surfaces, the default Tarmac and the inclement Ice and Gravel settings.

MR trims get forged-alloy BBS wheels, as well as Eibach springs and Bilstein shock absorbers, further stiffening the ride. This only reinforces the Evolution’s status as an enthusiast vehicle, though this is curiously hampered by an unusually wide turning radius.

Recaro sport seats provide superb support and moderate comfort, although they're a bit tight for larger drivers. Interestingly, and perhaps frustratingly, the shorter drivers the seats seem to have been designed for will find the high windowsills an annoyance, contributing to an already claustrophobic feel. Cloth upholstery is standard fare for the GSR, while the MR gets a suede/leather combo, with only the MR-Touring getting the full leather treatment. Rear seats provide adequate space and comfort for two smaller adults, but don’t fool yourself into believing claims of room for three.

Once again, an overly complicated navigation system mars an otherwise-competent control and gauge layout, which receives an improved information screen for 2010. Cheap-sounding doors close with an unsatisfying and cheap metallic reverberation, helped slightly by the increased sound insulation in the MR, although the cut-rate materials that are forgivable in the other Evolution trims are less forgivable given the Evolution’s pricetag.

Antilock four-wheel sport disc brakes in the GSR provide immediate and confident stopping, and the MR’s lightweight rotors only improve things. Otherwise, the Evolution gets all the same safety features as the rest of the Lancer line, with dual front, front-side, and curtain-side airbags, as well as a driver’s knee airbag. YAW controls that come with the S-AWC system continuously adjust and control the power and braking to all four wheels, providing a cacophony of computer-controlled safety in a sport package, effectively dispelling the rumor that it used to take skill to drive fast.

The Evolution has earned a five-star rating in most NHTSA tests, except frontal impacts involving the passenger and in its rollover rating, both of which got four stars.

While enthusiasts are quite pleased with the performance of both the engine and the suspension, the versatility of the six-speed automatic has been chastised for anything other than aggressive driving. The major complaint has come from the overall fit and finish of the Evolution, however, with cheap, ill-fitting materials having a glaring presence in the cabin, and a coarse-sounding engine failing to match the levels of its performance.

What's your take on the 2010 Mitsubishi Lancer Evolution?

Users ranked 2010 Mitsubishi Lancer Evolution against other cars which they drove/owned. Each ranking was based on 9 categories. Here is the summary of top rankings.

Have you driven a 2010 Mitsubishi Lancer Evolution?
Rank This Car

what year model engines are compatible to put in my lancer i blew the motor and don't wanna break the bank?

Guys, In Your Opinion, What Do You Think Of The 2010 Mitsubishi Lancer Evo?...