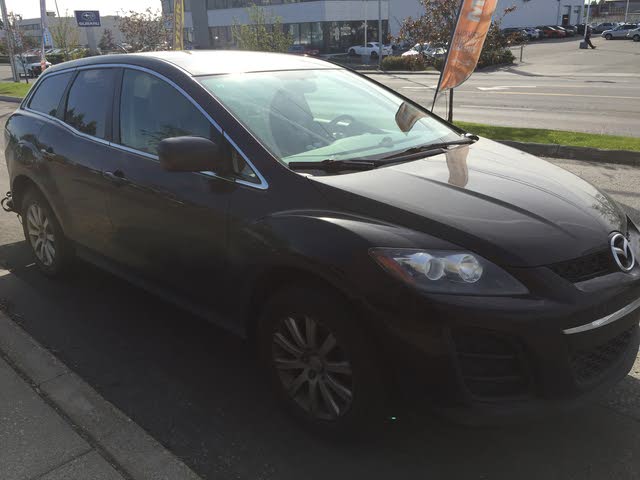 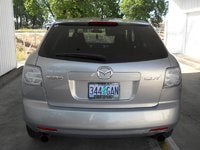 Comfort is lacking, inside and out, in the 2010 CX-7’s suspension and seats.

While the CX-7 offers impressive handling, the ride quality is lacking enough to offset the benefit. The efforts Mazda has made to improve the interior are impressive, but still not impressive enough to assuage consumers who still complain about an overall cheapness. Tackling the suspension, turbo lag, and interior materials, however, could mean a hell of a crossover for Mazda.

Mazda’s crossover, the CX-7, gets changes big and small for 2010, with a new base naturally aspirated engine, new trim levels, and freshened styling throughout. This five-seat, four-door crossover comes in SV, Sport, Touring, and Grand Touring trim levels, the latter two available with AWD. To stay in step with the rest of the Mazda lineup, the CX-7 has received a literal facelift, with the friendly “smiling” grille now showing up here as well. Additional exterior visual changes include larger side air intakes and a slightly revised rear fascia.

Standard for SV and Sport trims is a new, naturally aspirated 2.5-liter inline four-cylinder (I4) engine, potent despite its small stature. With 161 hp and matching torque, the engine manages an EPA estimate of 20/28 mpg on regular-grade gasoline. Its five-speed automatic transmission is compliant and even a bit sporty with the manual-shift mode available, making this setup perhaps better off the line than the turbocharged 2.3-liter engine standard in the Touring and Grand Touring trims, which suffers from turbo lag despite maximum torque showing up at an impressive 2,500 rpm.

However, once you get moving, the 2.3-liter, direct-injection, turbocharged I4 is plenty peppy, and the paddle shifters for the six-speed automatic do help in overcoming that ever-present turbo lag. With 244 hp and 258 lb-ft of torque, the 2.3 offers a maximum towing capacity of 2,000 pounds, and with the required premium gasoline, returns fuel economy of 18/25 in front-wheel-drive trims and 17/23 in all-wheel-drive trims.

The CX-7 offers almost car-like handling that actually surpasses that of much of its competition, with strong brakes, a tight turning radius, and a confidence-inspiring grip. Sadly, this doesn’t translate into a comfortable ride, as the overly stiff suspension translates far too many road imperfections through to the driver, exaggerating them into an almost-constant jiggle, wiggle, and general boogie-woogie as the car shimmies laterally and horizontally when passing over rough road.

That said, the CX-7 isn’t unsafe, just mildly uncomfortable. All-wheel-drive versions are especially confident in both grip and response, with standard traction control and anti-skid coming with all trims.

The interior of the CX-7 received a lot of attention, with a new steering wheel complete with audio controls, a restyled center console, and a new LCD screen as seen in other Mazda models. Similarly, the interior materials have been upgraded, however complaints have been heard about the overuse of hard plastics and cheap “metallic” paint that fails to fool anyone even before it starts chipping off.

Seats are comfortable and offer support to match the agile handling of the CX-7, but those taller in the torso as opposed to the legs may find some issue here. Headroom can be lacking due to a high seating position, and the seats fail to rise high enough to provide adequate comfort or support for taller drivers. Rear seats offer ample head- and legroom, although some have complained about an awkward seating position that puts the legs at an angle too high to be considered comfortable.

With its multitude of safety features, the CX-7 has received five stars in NHTSA tests excepting rollover resistance, in which it earned four stars. Traction and electronic stability control are standard, as are antilock four-wheel disc brakes with brake assist, dual front, front-side, and curtain-side airbags with rollover, and a tire pressure monitor.

The CX-7's refreshed styling has been well received, as has the inclusion of the new engine, sluggish as it may be. Many have praised the overall handling of the CX-7, but its ride quality and resulting lack of long-distance comfort have been a point of contention. While the interior has been improved, it still lacks the overall quality many consider a given at this price point.

I replaced a urea pump set 3.5 yrs ago and the SCR fault is showing up again. My adblue tank was showing 2 out of 5 bars on the level indicator then suddenly said I had 900kms left. I filled the tan...

How To Reset The PDF Filter Warning Light

I own a mazda cx 7 2.2 diesel the d p f warning light continuously flashes although taken it to a local garage they are unable to set the the warning light, can any one assist with this problem or d...

AUX Option Just Quit Working On My 2010 Mazda CX7 After No Issues Since I B...