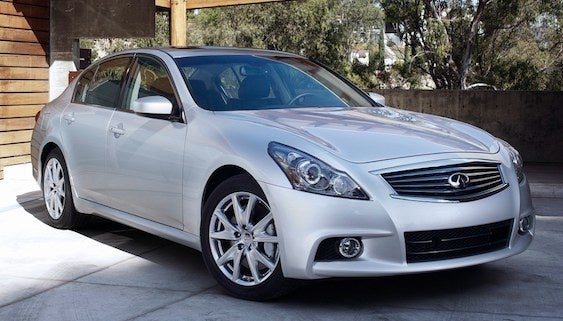 A class-leading suspension, engine, and transmission combine with luxury leanings in the 2010 Infiniti G37 to make a hit.

You'll have to avoid potholes like a pre-recall Prius in the 2010 G37 - otherwise your next appointment will be with your dentist to get your fillings refitted.

The 2010 Infiniti G37 has done everything right, almost. It’s a shame that a vehicle can come so close to perfection and fall so far at the same time, with a drivetrain and handling that meets or exceeds all rivals, but with a lack of subtlety in the suspension that can rob all enjoyment from a weekend jaunt or weekday commuting alike. Save the racecar dynamics for the racetrack, thanks.

The 2010 Infiniti G37 offers some subtle changes for big differences, with new design inside and out, the inclusion of Infiniti’s Connectiviti infotainment system, and three new colors: Graphite Shadow, Smokey Quartz, and Vibrant Red. Available in four trim levels - rear-wheel-drive Base, Journey, and Sport, and all-wheel-drive "x" - the G37 comes in four-door sedan, two-door coupe, and power-retractable hardtop convertible flavors, available with two suspensions, two transmissions, and in rear-wheel-drive (RWD), all-wheel-drive (AWD), and even all-wheel-steering (AWS) configurations. The front fascia has seen attention with a new bumper design, light clusters, grille, and relocated foglights. Bi-xenon adaptive headlights have also been added. Inside, changes are mostly to colors and trim, but a redesigned center console is reminiscent of its EX and FX brethren. 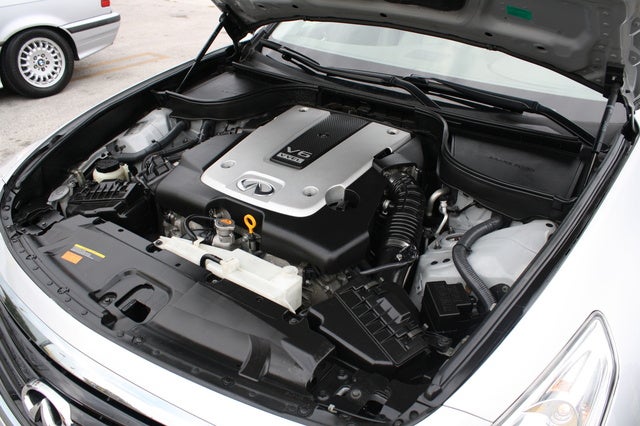 The 2010 Infiniti G37 is powered by Nissan’s 3.7-liter, VQ-series V6, an engine that has made Ward’s Top-10 list over a dozen times. It utilizes the Variable Valve Event and Lift system (VVEL), Nissan’s version of variable valve timing. Incidentally, this system uses fewer moving parts than those offered by competitors like BMW, which allows for higher rpms, manifesting in a 7,000 rpm peak hp of 330. All trims excepting the G37 Sports come with a seven-speed automatic transmission, while the Sport trims gets a six-speed manual. Testers have been impressed with the smoothness and precise action of the automatic, especially with the big fun-factor upgrade of paddle shifters, but the manual has been chided for sloppy clutch action and an inconsistent shifter. It’s a shame, because many find the manual to feel faster than the automatic, although numbers don’t seem to back that up. Perhaps some are just slow to adopt and adapt to modern technology, praise for the automatic notwithstanding.

The G37 manages an EPA estimated 18/26 mpg with the automatic transmission, dropping 1 mpg up high when choosing AWD. The manual will return similar numbers, clocking in at 17/25, with both setups requiring premium-grade gasoline.

A sport suspension is standard for the G37 Sport trims and optional for the Journey and x trims, although many have critiqued it for creating a ride that's simply too harsh for comfort. Even the standard suspension seems to fall short of its competitors, namely those from northern European countries that are known for having roads with no speed limits. The sport suspension also adds uprated brakes and the aforementioned paddle shifters that have seen so much praise. In fact, the consensus among reviewers has been that the best value is in one of the RWD trims with the seven-speed automatic and the paddle shifters, offering power, comfort, and fun that will outweigh, if not out-handle, its rivals.

The G37's problem isn’t in performance, but finesse. Anyone can brace the hell out of a suspension and make a car stick in the turns. The magic comes in providing performance without leaving comfort on the side of the road. The G37 doesn’t do that, but perhaps leaves it stranded at a rest stop for a while? Rough roads will reverberate, count on it, and when the surface gets really shaky, so will the car.

Options like adaptive cruise control, rear-obstacle detection systems, pre-crash assist, and a voice-activated nav system plant the G37 firmly in the luxury category, not to mention a Bose sound system with a 9.3GB hard drive. While not every trim gets the navigation system, all get the 7-inch touch-screen display it utilizes, and the system itself has received extra praise for its ease of operation. A unique touch is a main gauge cluster that moves along with the tilt steering wheel, so your vision to the dials is never obstructed. Kudos.

Materials are of high quality and firm finish, with real wood and aluminum trim – not faux – available. Space is limited in the Coupe, whether in the front or back seat, but adequate in Sedans. Comfortable seats gain lateral support in Sport trims, but constrict comfort for larger occupants.

Thanks to six standard airbags, front-seat active head restraints, four-wheel antilock disc brakes with brake assist and an anti-skid system, the National Highway Traffic Safety Administration (NHTSA) has awarded the G37 a five-star rating in all categories save frontal impacts involving the passenger, in which the G37 earned a four-star rating.

Sport trims get additional safety features in the form of a brake upgrade and a rear-obstacle detection system.

Owners have been impressed with the design and refinement of the G37, with its potent engine, smooth and precise automatic transmission, and an attention to detail in the interior that displays the care that was put into the vehicle’s production. This makes the shortcomings of the suspension even more pronounced, especially when considering the comfort shortcomings in contrast to its overall handling and performance. Still, refinement isn’t for everyone’s palate, and the overall paper performance of the G37 has been a hit.

JPSaleeby G37S convertible is a great car. Lots less expensive than others in class, with easy maintenance (at your local Nissan dealership) and a very good daily driver.

tiggerer I managed to pick this 2010 G37x sedan sweet beast for $20.000 CD and it only had 30,000k's and still had that new car smell considering it was 2014 when I bought her. For a luxury looking sedan she can take off like a rocket and has so many of the features that are only being introduced this year. Like due to the anniversary edition it is, I have the Tech & Nav. packages with adaptive lighting and cruise control, all wheel steering. Bose Sound Studio where I have uploaded 60 CD's and it's hard drive is only 1/4 full. It has a USB port in the arm rest where you can add a dongle and be able to have internet access via wi-fi and your aux. input. It's handy to be able to change the interior and door panels from stainless to wood grain for little money. Most import....to the wife heated seats to keep her lovely butt warmer,lol Buy this car!

Users ranked 2010 INFINITI G37 against other cars which they drove/owned. Each ranking was based on 9 categories. Here is the summary of top rankings.

My top dont always work how can i fix this problem

Should I Buy The Infiniti G37x

Is It Risky To Buy An Infiniti G37x With High Kms

2010 G37 Convertible Sport: Top is stuck in the open position button. When driving there is a piercing and constant beep, and the dash reads "Roof in Operation"

Battery Dies After 8-10 Days, Some Convertible Top Motion In The Back

(2010 Infiniti G37 convertible) Since last year, If I leave my car in the garage for more than week.. or 10 days, I come back to a dead battery. I have noticed, that every time this happens, there has...