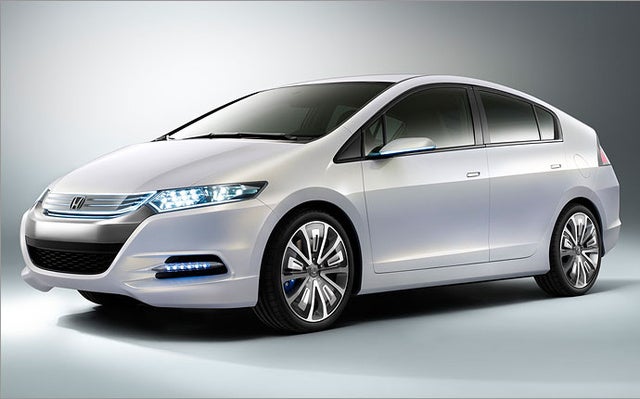 Average user score
4.5 ⁄ 5 stars
Based on 14 reviews
Insight On Insight by DENISE574 — I sometimes feel guilty (and sometimes smug) while driving up a steep incline and staying 'green' in the ECON mode. In the past, I wouldn't want to be behind a slower moving vehicle going up a hill... Read more
The Honda Insight Is A Very Dependable Car And I Highly Recommend It To Anyone!!! by Chryssi — I truly love my car!!!!!!! Totally efficient on gas, comfortable interior spacing and it's Sleek design definitely turns heads!I!. Unfortunately, The Honda Insight doesn't come with extreme horsepowe... Read more
Highly Positive by Julia640 — Love the Insight. Watching mileage increase helps me adjust my foot on the gas. :)> Acceleration, braking and handling are very responsive. Time will tell if the mileage is as good as advertised. ... Read more 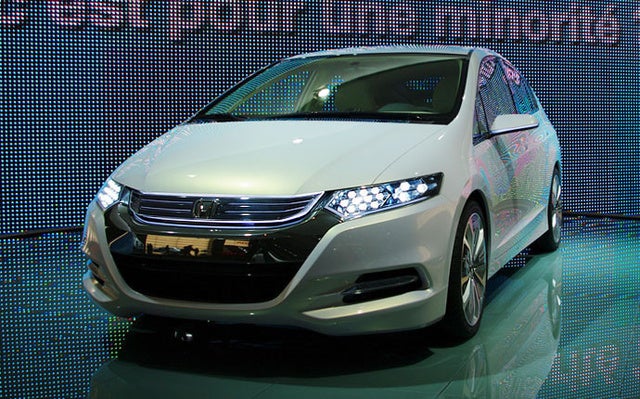 The Insight returns to Honda's lineup for 2010 as the automaker's entry-level hybrid, priced less than the larger and better-equipped Civic Hybrid, and less than the Toyota Prius, making the Insight the most affordable hybrid car currently available in the U.S. The Insight first appeared in 1999 as a two-seat, three-door hatchback with a 70-hp gasoline engine and a 13-hp electric motor. Although it was the most fuel-efficient car available in the U.S. at the time and won the International Engine of the Year award in 2000, the original Insight was never popular, selling only around 18,000 units worldwide in its eight years of production, so the automaker dropped it from the lineup. But sensing an opportunity, Honda gave the Insight a facelift and a less-expensive hybrid engine (thanks to updates in hybrid technology) and reintroduces the vehicle for 2010.

The five-door, five-passenger 2010 Insight sedan bears some resemblance to its competitor, the Toyota Prius, but it also carries forth styling cues that appeared on the original Insight, such as its "teardrop" profile. The Insight also strongly resembles the FCX Clarity, Honda's zero-emission, hydrogen-powered fuel cell sedan. In particular, the rear ends of both cars share the same basic design, with their aerodynamic shapes and high rear decks. In addition, the Insight borrows some design and structural components from the popular Honda Fit, although the Insight stretches 3 inches longer and 1 inch wider than the Fit.

Like in other hybrids, the Insight's gas engine deactivates during deceleration or when the vehicle stops. As a result, the Insight posts fuel economy numbers of 40/43 mpg and has a maximum driving range of more than 400 miles on a single tank of gas.

The Insight's IMA hybrid system also includes a compact Intelligent Power Unit, which captures and stores kinetic energy from the brakes when they're applied, and supplies additional power for acceleration. Honda located the Intelligent Power Unit and ultra-compact battery beneath the Insight's rear cargo floor, which allows the automaker to equip the sedan with a versatile 60/40-split and fold-down rear seat back, so drivers can maximize cargo space.

An automatic CVT (continuously variable transmission) completes the Insight's powerplant. The CVT behaves much like a traditional automatic transmission, although it uses a metal push-belt rather than gears to find the most efficient drive ratio. However, the CVT has received mixed reviews at best, with some noting a lack of precise feel and confident engagement from the transmission. In addition, many reviewers note a clunky feel when the powerplant switches from gas-powered mode to electric-motor-assist mode. Many reviewers also find the Insight's powerplant excessively noisy when revving.

Honda equipped the Insight with an interactive system called the Ecological Drive Assist System, or Eco Assist, which provides feedback (via changing background colors on the speedometer display) on braking and acceleration. The system was designed to aid drivers in maximizing fuel economy.

Users ranked 2010 Honda Insight against other cars which they drove/owned. Each ranking was based on 9 categories. Here is the summary of top rankings.

Have you driven a 2010 Honda Insight?
Rank This Car

Hello, thanks for your website,there is a honda insight , i understood that all the tail lights of the car are turned on, including the brake lamp and the rear gear lamp, but the lamp that should b...

IMA Light Came On After Unsuccessful Attempt To Change Map/spotlights To LE...

where can I get a manual? what Kind of oil does it usr?

How do I rate a local dealer on your site? Thanks!

How Do I Leave A Review For A Dealership? I Found A Great Deal From A Very ...