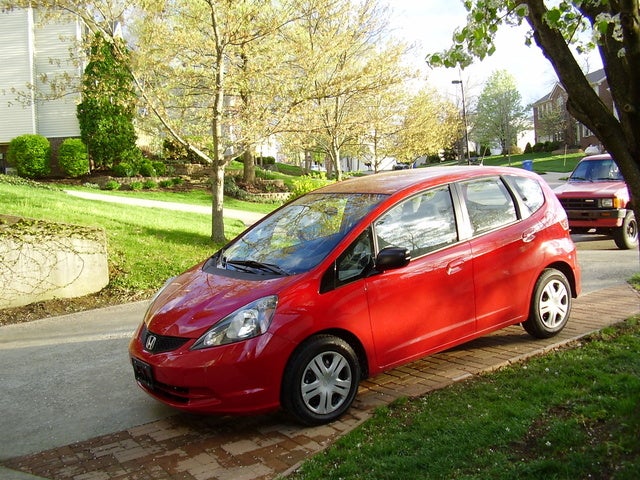 Great fuel economy and around-town maneuverability have made the 2010 Honda Fit a winner in the subcompact market, especially considering its impressive interior storage and cargo space.

The 2010 Honda Fit suffers from suspensions that fail to offer performance and comfort, an anemic engine, and interior materials that are unfortunately right on par with what you’d expect in a subcompact. 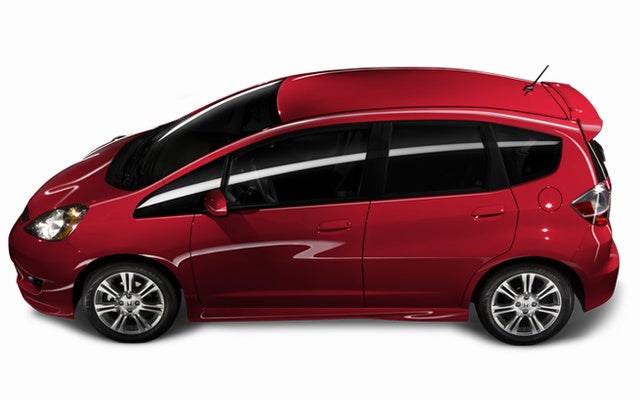 Achieving an average fuel economy of almost 32 mpg without the help of diesel or hybrid technology is impressive, especially given the Fit's price. The question remains, though: Are you willing to give up things like soft plastics, leather upholstery, usable horsepower, and a suspension that can actually perform without requiring a visit to the chiropractor to save a few dollars at the pump every year? If a subcompact is what you’re looking for, the 2010 Honda Fit is a good option.

Honda’s Global Small Car platform has given us the Fit, now in its second generation. After being released in Japan in 2001, the Fit didn’t make it to U.S. shores until April of 2006, which accounts for the seeming immediate redesign only last year and that we see no changes for the 2010 Honda Fit.

Now Honda’s introductory subcompact, the Fit gained that title when the Civic coupe increased in size and was rebadged as a compact. The Fit is available in front- and all-wheel drive, and all trims of this four-door hatchback come with the same 1.5-liter four-cylinder engine, with the buyer’s choice of a standard five-speed manual or optional five-speed automatic.

At 115 hp, the 1.5-liter inline four-cylinder engine in the Fit isn’t fast. It’s not even sprightly. However, the manual transmission does help it feel a bit more virile, especially when compared with the comparatively flaccid automatic. Even the Sport trim with its paddle-shifters fails to impress or deliver, although a sport mode does improve shift response. Both the clutch and the shifter are surprisingly light, perhaps even worryingly so.

Fuel economy is the strong point of the Fit, with manual-equipped models returning 27/33 mpg with the recommended regular-grade gasoline. Fits fitted with the automatic do even better at 28/35, and an extended-use automatic Sport trim was even reported as getting an average of 31.7 mpg over an 8,000-mile period.

However, the engine makes a lot of noise under load, and with 115 hp, it’s always under load, making it sound coarse and strained at anything other than idle. Drop a few gears while attempting to pass, and even turning up the stereo won’t cover up the racket.

This is a give and take situation with the Fit, especially given its short wheelbase and low curb weight. Give a bit of comfort to take a bit of handling, with the reverse being true as well. Sport models handle better than the slightly sluggish Base, with a sport suspension and low-profile tires on their larger 16-inch wheels, but the ride becomes harsh, and reactions to bumps and ripples much more pronounced. Base trims are more composed over uneven pavement, but also lean more in turns and lack the steering response of the Sport trim. Traction control and anti-skid are curiously available only on Sport trims equipped with the navigation system.

A lot of function is marred by a lack of form, although this is in keeping with the class. Subcompacts are not known for their luxurious materials, and the Fit doesn’t deviate. Controls are well-placed and intuitive, even with the optional navigation system absorbing some audio functions.

Seats are comfortable and supportive, front and back, although front passengers may wish for additional legroom, if they lean toward the long. Even rear seats offer enough room for reasonably sized adults, which is surprising for a subcompact. Cargo room is an even bigger surprise, as the Fit far surpasses its competition with seats that fold flat to offer more than 57 cubic feet (20.6 cubic feet with seats up) of interior storage.

NHTSA results show five stars for the 2010 Honda Fit in all categories except rollover resistance and passenger impacts, which both earned four stars. The Fit comes standard with dual front and front-side airbags, as well as curtain-side airbags, antilock brakes, daytime running lights, and a tire pressure monitor. Sport trims with the nav system also get traction control and an anti-skid system.

While the Fit is still priced a bit higher than its competition, owners are pleased with the added value they get with the Fit, perceived or not. Even with its increase in size last year, the Fit is still a small and sprightly little vehicle that makes around-town maneuvering a breeze. Still, interior materials could be upgraded, and more power is never a bad thing. Strangely, one of the most frequently heard complaints is about the Fit's ineffective sun visors.

walterbyrd I was all set to buy a 2010 Sport, but after doing some research, I am very concerned about paint. I am reading about Honda paint problems everywhere. Serious stuff: lawsuits, recalls, hundreds of consumer complaints etc. Seems Honda has had these problems since about 2005. Warranty Extension: 2006-2010 Civic Body Panel Clear Coat Cracks https://www.facebook.com/permalink.php?id=261395540552038&story_fbid=486552221369701 Top 255 Complaints and Reviews about Honda - Paint http://www.consumeraffairs.com/automotive/honda_paint.html Honda Defective Paint Class Action Lawsuit http://www.topclassactions.com/lawsuit-settlements/lawsuit-news/2185-honda-defective-paint-class-action-lawsuit

miquel1955 I made a change of transmission fluid in a bad place and 2 months later I had to repair it . Now my Fit is doing 24 / 25 , and in highway is doing only around 26.6 of gas / mileage . I have to drive a lot for my work . What can I do please to try to fix it in some way . I made a transmission fluid " bleeding " at the time of the repair , about 8 months ago . It is finishing me this problem .

Users ranked 2010 Honda Fit against other cars which they drove/owned. Each ranking was based on 9 categories. Here is the summary of top rankings.

Have you driven a 2010 Honda Fit?
Rank This Car

How Do I Post L My Car Dor Sale

Hatchback Will Not Open

The ATF Of Honda Fit Is Thick Like An Oil , Or It Can Be Clear And With Ton...

I changed my ATF recently , and a mechanic told me after getting some in a stick , that he " thinks that it has to be thick like an oil , and not that type of fluid he was seeing , clear , and with ...

I had full access to my listing and inbox until a photo verification was requested. I sent the photo in but they cut my access to my inbox. I've missed a scheduled test drive because I couldn't conf...

Where Is My Helicopter Noise Coming From?

I just rotated stock tires on 2010 Honda Fit base model. Am noticing a dull pulsating sound between 20-40mph. At highway speeds it goes away. Balance in wheels is good so it must be something else...