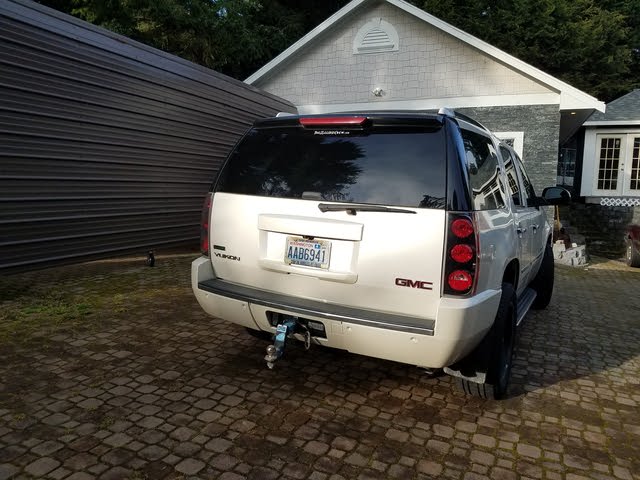 Ride comfort, style, performance, up to nine-passenger seating, and admirable trailering abilities help preserve the 2010 GMC Yukon as a top choice in the full-size SUV class.

Its difficult-to-remove third-row seat, tepid mileage, and the Hybrid’s hefty pricetag keep the 2010 Yukon from being all that it can be.

Definitely aimed at a select few, the 2010 GMC Yukon nevertheless performs up to expectations and will not disappoint those willing to pay its lofty asking price, especially for the class-leading Hybrid trim. For the rest of us, a smaller, nimbler crossover will do almost as much at less cost, but admittedly, it won’t rule the road quite so regally.

The gas-guzzling full-size SUV still lives, as proven by the popularity of the 2010 GMC Yukon. Yet fuel efficiency is now improved marginally through variable valve timing and significantly in the Yukon Hybrid trims. For cargo hauling and towing duties, this four-door, eight- or nine-passenger behemoth fits its niche almost perfectly, though a hefty pricetag, especially for the Hybrids, may cause those who want simply a basic workhorse to look into the Yukon’s less swanky Chevy Tahoe cousin as an alternative.

Available in three trim levels, the base SLE, upscale SLT, and first-in-its-class Hybrid, the 2010 Yukon is a styling leader that offers either rear-wheel-drive (RWD) or on-demand four-wheel-drive (4WD) configurations, three rows of seating, and 109 cubic feet of cargo space throughout the lineup. Changes and improvements for 2010 include a slimmed-down trim lineup, standard front side-mounted airbags, standard USB connection, and a 5.3-liter V8 as the standard powerplant in both non-hybrid trims.

Major competition for the 2010 Yukon remains the Ford Expedition, Nissan Armada, and Toyota Sequoia, with its Chevy Tahoe cousin taking its share of the market segment as well. None of these types of vehicles is particularly nimble nor especially parking-lot-friendly, but the 2010 Yukon is laudable for its reasonable turning radius, which makes for a marginally better fit in the big city. The available Z71 Off-Road Package gives the non-hybrid 4WD trims awesome off-road capabilities. Hybrid trims, however, are not available with the Z71 option, since the gas/electric technology is a bit delicate for off-road driving. 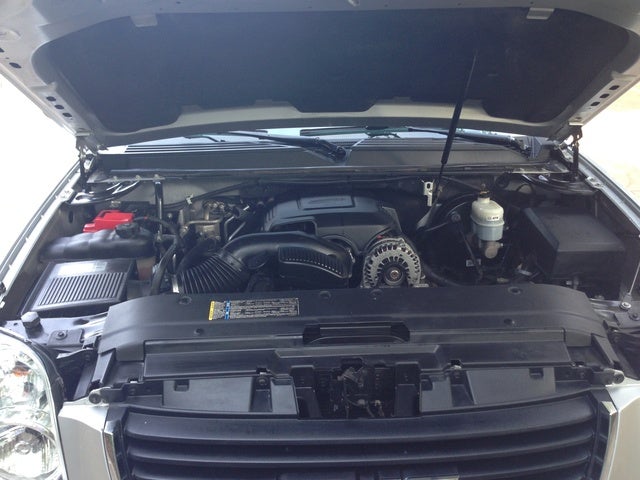 A notable improvement for the 2010 Yukon non-hybrid trims is a 5.3-liter variable-valve-timed, Flex Fuel V8 engine and six-speed auto-manual transmission, the new standard drivetrain across the lineup. Capable of 320 hp at 5,400 rpm and 335 lb-ft of torque at 4,000 rpm, this ethanol-capable V8 can tow 8,400 pounds with rear-wheel drive, while four-wheel-drive-equipped trims can tow 8,200 pounds when properly equipped. Cylinder deactivation at cruising speeds helps achieve EPA estimates of 15/21 mpg for both RWD and 4WD trims.

Hybrid Yukon trims continue to pack a 6.0-liter variable-valve-timed V8 hybrid engine and accompanying electrically variable transmission that uses an effective two-mode system for gas/electric power. A couple of 60-kilowatt electric motors can power the 2010 Yukon Hybrid up to 25 mph for short distances on electricity alone, while regenerative braking assists the gas-burning V8 in recharging the 300-volt nickel hydride battery pack. Also boasting cylinder deactivation technology as well as automatic engine shut-down and start-up at stops, this class-leading hybrid engine will get an estimated 21/22 in both RWD and 4WD configurations. The Hybrid’s powertrain is capable of towing 6,200 pounds in RWD trims and 6,000 pounds in 4WD versions.

Most reviewers consider both the conventional and the hybrid powerplants as responding with alacrity from a stop and remarkably capable in merging and passing on the highway. Both the non-hybrid’s six-speed auto-manual and the Hybrid’s four-speed automatic are noted by virtually all reviewers as alert and smooth, with shifts timed nearly perfectly up and down their gear ranges. Hybrid trims are lauded by nearly every review for virtually seamless switching between gas and electric operation. Though some reviewers mention room for improvement in the Hybrid’s gas mileage, the consensus is that fuel efficiency isn’t bad at all for such a hefty hauler. According to more than a few professional reviewers, a significant glitch with the Yukon Hybrid trims is the difficulty in recouping gas savings from a lofty initial cost over the typical vehicle lifetime.

All 2010 Yukon trims, including the Hybrids, are equipped with long-and-short-arm front independent suspensions, front and rear stabilizer bars, and multi-link rear suspensions. The SLE and SLT trims ride on standard 17-inch alloy wheels and all-season tires, while the Hybrid trims boast 18-inch alloys. Additionally, 20-inch chromed wheels are available for the non-hybrid Yukon trims at a significant cost.

Reviewers find the Yukon to be a reasonably well-mannered SUV in nearly all respects, with the standard 17-inch wheels found on the non-hybrids cushioning all but the most egregious bumps and potholes. Some float is noted when encountering depressions and crests, but overall ride comfort is described as well-rounded and comfortable. GM’s AutoRide load-leveling suspension, available for the non-hybrid SLT, while mitigating some float, contributes little to ride comfort or handling capability, according to most reviewers.

Most reviewers consider the Yukon’s steering light enough for city traffic, if a bit vague on the highway. Body lean and noseplow, however, are well-controlled in even hard cornering, a delightful surprise for the majority of reviewers. Braking is described by nearly all reviewers as straight and powerful, with a firm feel to the pedal. Reviewers note that the Yukon’s relatively compact turning radius can be a major boon when maneuvering crowded city streets. 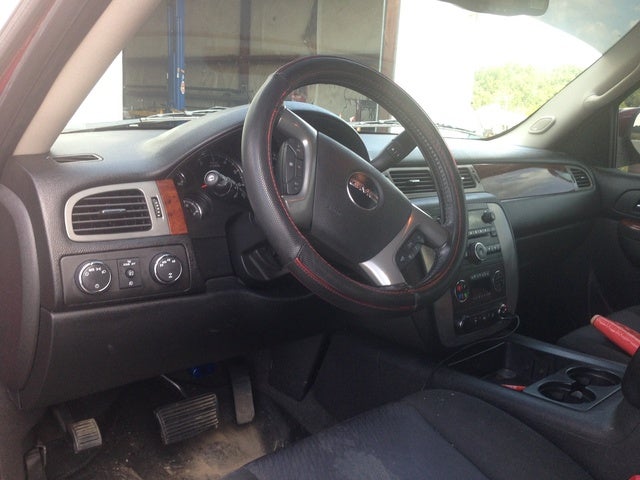 A power sunroof, remote start, and rear-seat DVD entertainment are among the more popular Yukon options, with various wheel and suspension upgrades, including the Z71 Off-Road Package and AutoRide Suspension Package, also available.

Reviewers note a laudable cabin ambiance in the 2010 Yukon, though dashboard gauges could be made a bit more legible. Interior workmanship and materials are generally considered top-notch by most reviewers, with proper fits and enough soft surfaces to make the cabins seem pleasant and inviting. Comfortable seating and plenty of head- and legroom, at least in the front two rows, ensure passenger comfort on even the longest drives, according to the majority of reviews. Third-row seating, however, is generally disparaged as cramped and uncomfortable for the average adult, while these same bulky third-row seats are noted as being difficult to remove when extra cargo space is necessary to augment the smallish load area available with the seats in the vehicle.

With standard four-wheel disc ABS with electronic brakeforce distribution, as well as traction and stability control, not to mention daytime running lights, the 2010 Yukon is well-equipped with collision avoidance technology. All this is complemented by such standard passenger protection features as new-for-2010 dual front side-mounted airbags, three-row head airbags, and a post-collision safety system, across the lineup. The SLT and Hybrid, meanwhile, add standard rear parking sensors and front fog/driving lights to the mix, each of which is available as an option on the Yukon SLE. Additionally, the Hybrid comes equipped with standard turn-signal-integrated side mirrors, while a blind-spot alert system is available for all trims.

The National Highway Traffic Safety Administration (NHTSA) gives the 2010 Yukon five stars for frontal impact protection and three stars for rollover protection. Side impact protection was not tested. The other government testing agency, the Insurance Institute for Highway Safety (IIHS), has no safety ratings available for this year’s Yukon. 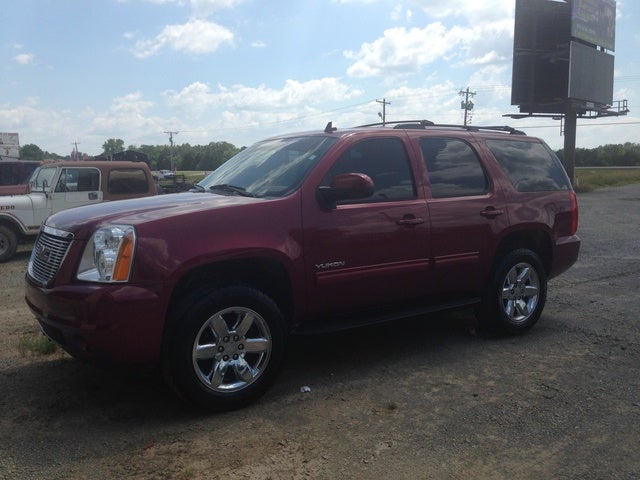 Among the pet peeves that owners have with the 2010 Yukon is, obviously, its not-ready-for-primetime gas mileage. Additionally, owners find removing the third-row seats for extra cargo space to be a chore, with the seats weighing in at some sixty pounds, not to mention their limited access, as well as a lack of serious storage/cargo area behind said third row. Details, including the lack of push-button start and some interior plastics issues, are also listed among the causes of some owner discontent.

Positives for the 2010 Yukon, on the other hand, lead with its over-the-top styling and, when equipped with the Z71 Off-Road Package, its outrageous off-road capabilities. Of course, trailer-towing capabilities, powerful acceleration, and a righteous ride also draw kudos from most owners. Finally, a quiet cabin and comfortable seats are mentioned as making life quite pleasant for passengers over long journeys. Owners seem to recognize that though it’s a pricey ride, the Yukon offers more amenities than its Tahoe cousin, and are, therefore, willing to spend the extra cash. Few are disappointed.

Marshall Great family car with a lot of features for the price.

Have you driven a 2010 GMC Yukon?
Rank This Car

We have a 2010 GMC Yukon Denali 8 cylinder. After driving for about 25 minutes turned car off for a child drop off started engine and check engine light came on, oil gauge at zero but oil pressure w...

How can I know if motor is gone in Denali or if it's just the oil pump? Does the truck give any indicators

My right tail light when I pressed the brakes the brake lights will not come on so I changed the bulbs and still having the same problem. What else could be the problem?

I replaced the cooling fans now ac pump keeps cycling on and off. I unhooked the battery and it worked for a while but back to cycling.

What Type Of Oil Is Recommended For The 2010 Yukon?