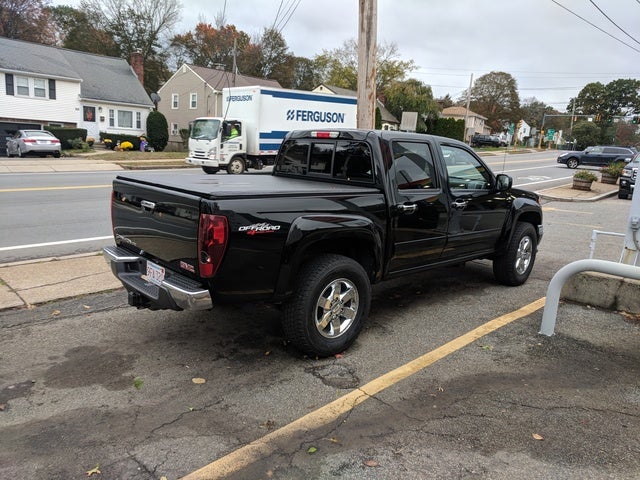 Though it has its detractors, the 2010 GMC Canyon has a lot to offer those who need a well-equipped light-duty pickup. Three engines, two transmissions, two bed lengths, an available off-road package, and the nimbleness of its stubby dimensions make this compact Jimmy a utilitarian choice over its full-size cousins. All three trim levels, the base Work Truck, the midlevel SLE, and the top-shelf SLT, are available with rear-wheel drive (RWD) or part time four-wheel drive (4WD), and while the SLE comes in the Regular, Extended, and Crew Cab versions, the Work Truck is not available with the Crew Cab, while the SLT comes in only the Extended or Crew Cab configurations. All Regular and Extended Cab trims mount a 6-foot bed, while the Crew Cab trims carry a 5-foot bed. Needless to say, Regular Cab Canyons seat three passengers, Extended Cabs carry four or five passengers, depending on the trim level, and Crew Cabs seat six passengers with a tolerable amount of leg- and headroom. While the 2010 Canyon is relatively unchanged from ’09, this year’s trims feature a significant safety upgrade, but lose a couple of options, including the popular power sunroof.

Of the three engines offered with the 2010 Canyon, the base, variable-valve-timed 2.9-liter inline four-cylinder (I4), with its 185 hp and 150 lb-ft of torque, is perhaps the least utilitarian. Equipped with a standard five-speed manual transmission (except the SLE rear-wheel-drive Crew Cab, which packs a four-speed automatic), the I4 can tow only 3,400 pounds in rear-wheel-drive (RWD) versions and 3,100 pounds with 4WD, while mileage is estimated at 17/23 mpg for RWD Canyons and 16/23 for 4WDs. Probably the most efficient engine in the Canyon lineup would be the 241-hp, 242-lb-ft/torque 3.7-liter inline five-cylinder powerplant that comes with a standard four-speed automatic transmission; it offers 5,500 pounds of towing capacity and gets 17/21 with RWD and 16/21 with 4WD. Additionally, the Canyon can be delivered with a potent 5.3-liter V8 that, when managed by its standard four-speed automatic, puts out 300 hp and 320 lb-ft of torque, tows 6,000 pounds, and gets an estimated 15/21 with RWD and 14/19 with 4WD. Those trims equipped with part-time 4WD feature auto-locking hubs and electronic hi-lo gear selection.

Standard appearance, comfort, and convenience amenities for the 2010 Canyon Work Truck Regular Cab trims include skid plates, 16-inch steel wheels, cruise control, tilt-wheel steering, air conditioning, front and rear floor mats, a leather-wrapped steering wheel, AM/FM stereo with two speakers, OnStar telecommunications technology, and a hands-free phone. The five-passenger Work Truck Extended Cab adds folding rear seats and two extra speakers. Additional standard goodies for the SLE Regular Cab include 16-inch alloy wheels, a single-CD player with four speakers, and XM satellite radio, with the Extended and Crew Cab SLE trims adding two more speakers. Finally, the high-end, four-passenger SLT Extended Cab trim level adds power-adjustable, heated front bucket seats, leather upholstery, and power windows, door locks, and mirrors to the list. Options for the Work Truck include, among many of the standard items on the higher trims, a trailer hitch and wiring, as well as a locking rear differential and the 3.7-liter I5 with its four-speed automatic. Options for the SEL, besides the 3.7-liter I5 and, in the Extended and Crew Cab versions, the 5.3-liter V8, run the gamut from the Z71 Off-Road Package and chrome-clad wheels with all-terrain tires to a sliding rear window and deluxe cloth front bucket seats. As the top-shelf trim, the SLT qualifies for the available Sport Suspension Package with 18-inch wheels and 3.42 rear axle ratio.

Safety-wise, the 2010 Canyon boasts four-wheel ABS, traction and stability control, front and, in the Extended and Crew Cab configurations, rear head curtain airbags (made standard in 2010), daytime running lights, and a post-collision safety system with OnStar monitoring. Additionally, the SLE and SLT trims are delivered with standard front fog/driving lights.

Owners of the 2009 Canyon, though not thrilled with its tepid build quality and low-rent interior materials and workmanship, find its ride comfort and decent handling characteristics laudable. Poor acceleration from the standard I4 and less-than-stellar mileage figures from all three powerplants haven’t won many friends, but available 4WD, Crew Cab passenger room, and the available Z71 Off-Road Package draw praise and salutations from a great many owners. Finally, the Canyon’s semi-hefty pricetag, though not a deal-breaker in many negotiations, doesn’t sit well with a number of owners.

Have you driven a 2010 GMC Canyon?
Rank This Car

How Do I Replace The Heater Core On A 2010 Canyon

Can a shorter antenna be purchased. Antenna hitting garage ceiling. Need one about 8-10" shorter than stock 30".