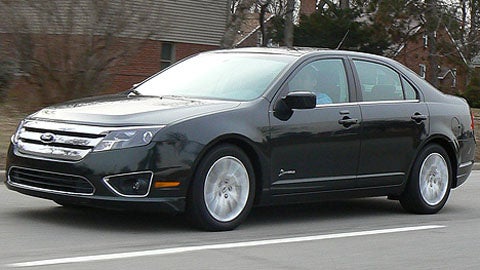 A rude racket from the four-cylinder engine, as well as an iffy feel to the electric power steering and some complaints regarding interior plastics keep the 2010 Fusion from perfection.

To put it mildly the 2010 Ford Fusion is a vehicle that may finally justify the hue and cry to “buy American.” This car draws raves from both reviewers and owners alike, and though it may not go down in history, like its Mustang brethren, promises to keep Ford well ahead of the curve in the midsize sedan market. A significant upgrade in ’09 didn’t hurt, either.

Ford has taken a pretty darned good five-passenger midsize sedan and, with the 2010 Ford Fusion, made it even better. Not only that, but they’ve added a show-stopping Hybrid to the Fusion mix that may actually outperform certain other Far-Eastern-made gas-electric sedans – be still my heart!

For 2010 the Fusion is offered in five trim levels, four of them gas-powered - the base S, lower midlevel SE, higher midlevel Sport, and top-end SEL - as well as the brand-new gas-electric Fusion Hybrid. The new-for-2010 Sport and SEL trims are available with either front-wheel drive or all-wheel drive (AWD). In addition to adding the Sport and Hybrid trims, the MAZDA6-based Fusion's gas-only lineup has been the recipient of a number of styling, safety, and performance upgrades, including a new grille design, standard stability control, and some cabin tweaks that have resulted in a more ergonomically sound and pleasantly ambient atmosphere inside.

Sixteen and a half cubic feet of trunk volume as well as a few extra seat and door pockets provide plenty of storage space and cargo-carrying capacity, while the technology that Ford traditionally does well is present in the ubiquitous SYNC infotainment system. About all anyone can seem to find to complain about is an overly busy center stack and a four-cylinder engine that emits far from a gentle purr. 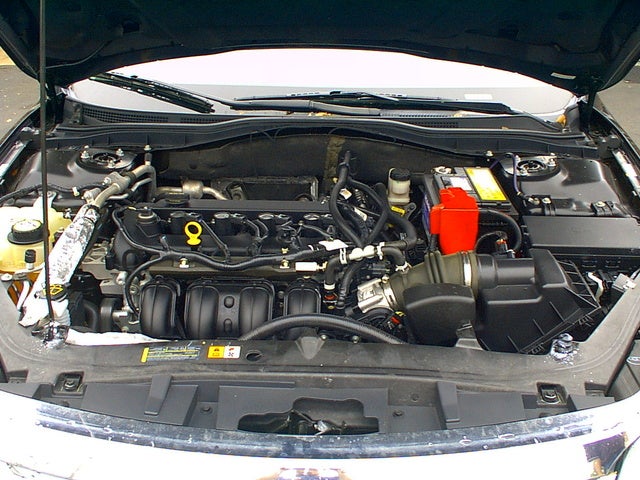 An inline four-cylinder engine (I4), two V6s, and the new hybrid powerplant are each available for the 2010 Fusion, as well as the six-speed manual and six-speed auto-manual transmissions, not to mention the constant-velocity transmission (CVT) in the Hybrid. All four engines and all three transmissions are described by reviewers as perfectly adequate in power, fuel efficiency, and performance. The only negatives seem to be that the I4 struggles on steeper hills and the CVT tends to be a bit lazy in downshifting.

For the SE and SEL trims, a 3.0-liter E85-ethanol-capable Flex-fuel V6 that, when managed by its accompanying six-speed auto-manual shifter, is capable of 240 hp at 6,550 rpm and 223 lb-ft of torque at 4,300 rpm, is optional. Both trims are rated at 18/27 in the front-wheel-drive configuration and 18/25 with the SEL's all-wheel-drive powertrain.

The SEL AWD trim is available only with the 3.0-liter V6, while the Sport AWD carries the 3.5-liter V6 as standard equipment. Both AWD trims feature a center-mounted limited-slip differential.

The Fusion’s 2010 Hybrid edition is equipped with a modified 2.5-liter gasoline engine and two electric motors, with one motor for power and the other to run accessories when the gas engine is shut down at stops. Regenerative braking works in tandem with a nickel-metal hydride battery to provide power to the dual electric motors. The Fusion Hybrid is touted to accelerate up to some 47 mph on electric power alone. Independent tests have proven the Fusion Hybrid’s gas/electric engine configuration capable of 0-60 in 8.7 seconds.

All the Fusion trims are noted by reviewers as well-mannered and sprightly, indeed one of the more engaging sedans in which to tool the highways and byways. The electric power steering, while conceded by virtually all reviewers to be inferior to hydraulics, suffers few ill effects in the Fusion, while alert and road-grabbing turning capability is no detriment to a comfortable and reasonably flutter-free ride. Some reviewers note a bit of torque-steer with the FWD V6s during acceleration, but by and large all are impressed with the Fusion’s ride and handling abilities.

One reviewer mentions that the Fusion Hybrid’s regenerative braking equates to a somewhat mushy pedal feel, but not enough to cause anxiety. Additionally, because it’s a significantly heavier vehicle, virtually all reviewers agree that the Fusion Hybrid imparts a less nimble feel than do its gas-powered siblings.

Ford has customarily had an edge in equipping its vehicles with the latest in technological gadgetry, and the 2010 Ford Fusion is no exception. The well-regarded SYNC infotainment system is, of course, available for all trims, and a sensor-activated parking assist feature is optional for all trims but the Fusion S. Most reviewers find the Fusion’s cabin roomy, tolerably quiet, comfortable, and well laid out. Gauges and controls are described as easily readable and for the most part, readily accessible. One minor complaint that is mentioned by a number of reviewers is that the center stack is just a tad overloaded with buttons and gizmos.

Options include daytime running lights for the base S, rear parking assist sensors, heated mirrors, and with the Moon and Tune Package, a power moonroof and the SYNC infotainment system for the SE, while the Sport, SEL, and Hybrid offer such options as voice-activated DVD navigation, a 390-watt, 12-speaker stereo with a 6-CD changer, a rear-view camera system, sport-tuned suspension, and 18-inch machined aluminum wheels.

Virtually all professional reviewers agree that Ford leads the league in passenger safety equipment and crash-test scores. The 2010 Ford Fusion does its part to maintain this edge with four-wheel disc ABS, electronic brakeforce distribution, dual front side-mounted airbags, front and rear head airbags, a post-collision safety system, and a remote anti-theft alarm. Front fog/driving lights are optional with the S trim and standard on all others, while dusk-sensing headlights are standard with the Sport, SEL, and Hybrid trims.

The Insurance Institute for Highway Safety (IIHS) has given the 2009 Fusion its “Top Safety Pick” award and continues to give the 2010 Fusion its highest rating of “good” in all safety test categories.

Owners, of course, think highly of the 2010 Ford Fusion. There are, however, issues mentioned by various owners that might be addressed. The over-burdened center stack is one problem that has been pointed out by owners as well as professional reviewers, while a few owners bemoan the Fusion’s lack of hood struts. Some less-than-attractive interior trim materials have disappointed a couple of owners, though there are those who maintain that the cabin is among the best-looking and most ergonomically sound in its class. A couple of problems are reported with the throw and flow of the standard manual transmission in the lower-end Fusion trims, while a few mechanical problems are also noted by some, specifically transmission glitches and check-engine warnings lights. Finally, a number of owners wonder if Ford might add a few more horses to the Fusion’s I4 engine output.

Owners speak in glowing terms of the Fusion's fuel economy, especially in the Hybrid version, as well as its solid feel, ride comfort, quietness, and overall value. The Fusion’s exterior styling and a number of individual features, especially the SYNC infotainment system, seat comfort, and super efficient climate-control setup, are also lauded by owners. Overwhelmingly, owners feel that the Ford Fusion represents American automaking at its best.

Doug Well-documented problems involving a sudden activation of 'limp mode' for no apparent reason. This means a sharp jerk as if the engine has disconnected from the transmission, and the wrench light (check engine) activates. You'll still have steering and brakes, as the engine is running at idle speed, but NO acceleration, as the limp mode disconnects the throttle position sensor from the engine. Ford and the dealer were no help, and this is a CPO car WITH an extended warranty. Guess we know what customer service means to Ford.

Users ranked 2010 Ford Fusion against other cars which they drove/owned. Each ranking was based on 9 categories. Here is the summary of top rankings.

Have you driven a 2010 Ford Fusion?
Rank This Car

Can Anyone Identify This Part?

While driving down the highway I heard a bursting sound from my engine and then it started knocking. We looked at it when we got home and there was a hole in the bottom of the engine. Can Anyone te...

18 views with 3 answers (last answer about a week ago)

Car Will Crank But Won't Start

I have a 2010 Ford fusion while I was driving it, it stalled out like I had no gas but I do.. I tried to restart it and it would crank, but it wouldn't turn over..

Car Will Crank But Won't Start

My 2010 Ford fusion cranks but will not start it's not the battery.. initially the car stalled out like it needed gas, it has a half a tank.Then we went started again and it cranked but it wouldn't...

My 2010,Ford Fusion Sel Dies Out While Driving

My car loss acceleration in St. Louis on 3/5. I left it a week at the Ford dealer. They replaced the purge valve and massive sensor. Then 6 days later I was driving on I75 in Marietta Ga at 1am. Ca...

346 views with 3 answers (last answer about a month ago)

My 2010 Fusion Dies Out When Driving

Driving on interstate 70 mph Fusion dies out as if it is not getting enough fuel. After getting over to side of road, turn engine off for 10 minutes and starts right up and purrs like a kitten. Diagn...