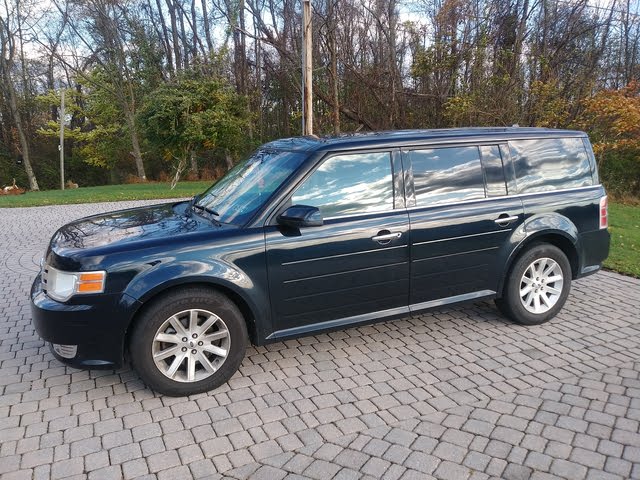 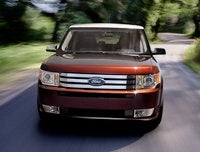 The minivan is dead, and the SUV is on life-support. With that in mind, Ford calls its 2010 Flex a CUV (Crossover Utility Vehicle), otherwise known as a full-size crossover - something previously known as a “wagon.” Available in three trim levels - SE, SEL and Limited, with the SEL and Limited trims available with front- or all-wheel-drive - the four-door 2010 Ford Flex offers seating for up to seven passengers. With an optional twin-turbocharged engine, funky box design, and unique features like a four-panel glass roof, Ford is doing its best to inject some sex into what could be a boring entry.

The base engine for the Flex is a 262-hp, 3.5-liter Duratec V6, an engine that was named one of Ward’s 10 Best in 2007. Mated to a six-speed automatic, the naturally aspirated V6 manages EPA estimates of 19/24 mpg. For another option, Ford upgrades the 3.5-liter V6 with direct fuel injection and a twin-turbo setup for 355 hp and 350 lb-ft of torque - this engine is dubbed the EcoBoost.

Available in AWD SEL and Limited trims, the EcoBoost still manages a wildly impressive EPA estimate of 18/22, a small penalty for almost 100 extra horses. The use of the twin-turbo setup, combined with direct fuel injection, is supposed to eliminate the lag commonly found with turbocharged engines. The EcoBoost comes with a six-speed automatic with manual-shift capability.

The Flex seats seven passengers with a second-row split bench or six with the optional second-row buckets. 17-inch alloy wheels are standard on the SE, while the SEL and Limited trims get 18-inch alloys and 19-inch polished alloys, respectively. EcoBoost-equipped versions enjoy 20-inch alloys, with unique rims on the Limited trim, one of the only visual cues to its extra power. The Flex has several interesting options available, including a dual-screen DVD entertainment system, a refrigerator unit, and a tow package with a maximum towing capacity of 4,500 pounds.

Four-wheel antilock disc brakes come with an anti-skid system with rollover sensors, and you’ll also get a tire pressure monitor regardless of wheel size. A rear-obstacle detection system is also included, along with wiper-activated headlights, dual front airbags, front side airbags, and curtain side airbags with rollover deployment.

Have you driven a 2010 Ford Flex?
Rank This Car

How Can I Remove My Picture From Listing

How can I remove my photo from listing

How Can I Find Out The Brightness Level Is On This?

i wanna make sure to get the right one

What Could Be The Problem?

Actuator motor was changed but still ticking but AC on still blowing hot on driver side heat is good.What else could be the problem?

Ticking When A/C Turned On

When I turn on the A/C there is a ticking sound behind the glove box area. It stops after a few seconds.