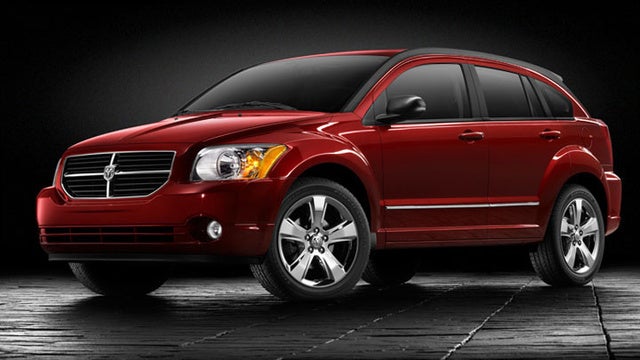 Issues with reliability and quality, as well as anemic engines and insipid handling, mire the 2010 Caliber toward the bottom of the list of preferred hatchbacks.

All style and little substance pretty much describes the 2010 Dodge Caliber. Despite its bold looks, comfortable seating, and innovative amenities, this hopeful hatchback has too much going against it, including lazy performance and marginal customer service as well as tepid quality and reliability, to become a true class act.

Though touted as a value leader, the 2010 Dodge Caliber is a prime example of getting what you pay for. Economically challenged Chrysler/Dodge has, nonetheless, traditionally been a styling giant, and the Caliber is no exception, with bold lines and an aggressive stance. Unfortunately, nearly all reviews of this midsize, five-passenger, five-door hatchback lament its poor acceleration, limp handling, less-than-inspired interior quality, and so-so record of reliability. A 2010 cabin redesign that includes standard cruise control as well as air conditioning and a chilled glovebox for beverage cooling have bolstered the Caliber’s image, but only marginally.

The 2010 Caliber is available in five oddly named trims: Express, Heat, Mainstreet, Rush, and Uptown. All trims are front-wheel drive (FWD) only, with no all-wheel-drive option available. Cargo capacity for the lineup is a fairly respectable 47 cubic feet with the rear seats folded, while adequate cubbies and pockets keep cabin storage space above average. If nothing else, the Caliber exhibits a bit more utility than the average compact wagon.

Two engines, including a more-powerful 2.0-liter inline four-cylinder (I4) powerplant that replaces the old 1.8-liter I4, and two transmissions are offered with the Caliber, but, again, performance is below par according to most reviewers, though mileage figures are at least in line with its major competition, the Honda Fit, Scion xB, and Chevy HHR. The vast majority of reviewers suggest looking at all of the above before deciding on the Caliber. 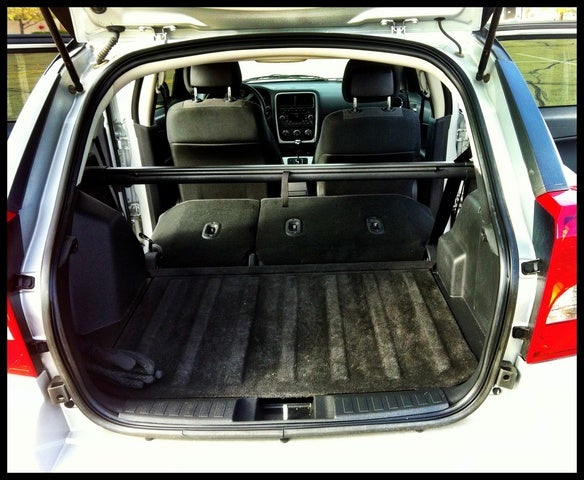 Additionally, a continuously variable transmission (CVT) is available for the Heat and the Rush and standard in the Mainstreet and Uptown trims.

Reviewers note the Caliber’s acceleration to be tepid at best, with the 2.0-liter I4 especially lazy, both from a stop and on the highway. Mileage, however, is adequate, according to most reviewers, and thus adds, at least marginally, to this hatchback’s perceived value. Additionally, reviewers complain of some laziness on the part of the CVT when on the highway, though it performs well in city driving. The five-speed manual transmission seems to many reviewers a bit hesitant at times, requiring frequent shifting to maintain ideal acceleration.

Suspension-wise, the 2010 Caliber is equipped similarly to much of its competition, with a four-wheel independent suspension, MacPherson front struts, front and rear stabilizer bars, and a multi-link rear suspension. The base Express rolls on 15-inch steel wheels, the Mainstreet and Uptown both sport 17-inch alloy wheels, and the Rush and Heat ride on 18-inch alloys.

Reviewers complain that ride quality in all trims could be better, with little absorption of road imperfections. Body lean is described as moderate in cornering, and the smaller tires on the Express have an unnerving squeal at faster cornering speeds. According to reviewers, however, the larger tires found on the Heat and the Rush dampen tire noise and improve traction.

Altogether, reviewers find the Caliber’s steering to be adequate, though somewhat numb, with its front disc and rear drum brakes decently powerful and straight in hard braking, but handling and ride quality are given low marks by most. Others, however, rate the Caliber as no worse than the majority of hatchback wagons on the market.

Let it not be said that the 2010 Caliber neglects passenger comfort and convenience. The base Express trim, for instance, lists premium cloth upholstery, remote power locks, one-touch power windows, heated power outside mirrors, tilt-wheel steering, cruise control, air conditioning with a chilled glovebox, a 66-watt single-CD player with four speakers, and Bluetooth communications technology among its standard amenities. The Caliber Heat adds a fold-flat front passenger seat and reclining rear seats, while the Mainstreet ups the ante a bit with Sirius satellite radio and 12 months of free satellite service.

Options run the gamut from UConnect/Bluetooth wireless, remote start, premium audio technology, and upgraded wheels and trim, as well as many of the standard goodies found on the higher trims for the Express and Heat, to a universal garage door opener and power sunroof for the Heat, Mainstreet, Rush, and Uptown trims. GPS-based DVD navigation is additionally available for the Rush and Uptown trims.

Reviewers find the Caliber’s cabin to be roomy and well-stocked with storage cubbies and pockets, while gauges and controls are deemed easy to distinguish and logically placed. Unfortunately, the effect of all the technological doodads and convenience features is considerably dampened, in the opinion of virtually all reviewers, by the liberal use of distinctly subpar materials, including far too many hard plastic surfaces, throughout the cabin. Occasional color variation among interior materials also seems to need some work, according to several reviewers. Leg- and headroom are noted as adequate, but visibility will be a tad iffy due to the Caliber’s thick roof pillars.

Standard safety features for all 2010 Caliber trims include front disc and rear drum brakes with electronic brakeforce distribution, active front headrests, front and rear head airbags, and driver’s-side knee airbags. The Heat, Rush, and Uptown trims add standard four-wheel disc ABS, while the Mainstreet offers this as an option. All trims except the Express are also delivered with standard front fog/driving lights. Optional for the Heat trim level and higher are ESP traction and stability control and dual front side-mounted airbags.

The National Highway Transportation Safety Administration (NHTSA) gives the Caliber high marks for passenger safety, with five stars in front and side impact testing, as well as four stars in rollover tests. The Insurance Institute for Highway Safety is not so generous in their praise, giving the Caliber its highest rating of Good for front impact testing, but only a next-to-last Marginal in side impact tests.

Say what you will about Dodge and Chrysler products, innovative and appealing exterior styling has traditionally been a strong point. Topping the list, therefore, of owner kudos for the 2010 Dodge Caliber is its brash, macho, and downright Eastwood-esque styling.

Unfortunately, poor reliability, the non-availability of four-wheel or all-wheel drive, pricey options, marginal-to-poor workmanship and cabin material quality, and poor side and rear visibility keep many owners befuddled as to Dodge’s true commitment to its customers. Additionally, owners continue to lament the lackadaisical performance of both I4 engines in acceleration, both from a stop and when merging and passing, with the 2.0-liter powerplant getting an especially bad rep, despite its gain of 0.2 liters over last year’s base engine.

Owners of the 2010 Caliber do, however, praise its interior spaciousness, decent mileage, Chill Zone feature, high stance, comfortable seats, and, last but certainly not least in these days of financial strain and elevated bang-for-the-buck frugality, its plain and simple value.

trudykk I love mine. At least until transmission began overheating. Hoping to remedy this with fluid change.

Have you driven a 2010 Dodge Caliber?
Rank This Car

I Found A Loose Plug With Wires Do You Know What This Could Be?

While replacing my driver side headlight I came across a plug (looked like it should be plugged in to something) it was just laying loose behind the front grill at the bottom. Do you know what this co...

Blower motor fan will not come on

Battery is good. Keys work to open doors remotely. I disconnected the battery for 5 minutes and reconnected, no starting. The lights work when the key is in ignition. No clicking noise or turn...

Overheating, Not Sure If Fan Is Blowing

Not exactly sure what is going on as I am not a car person what-so-ever. My car started overheating yesterday morning. Not able to pull over and check fan as I was in traffic. When I got home lat...