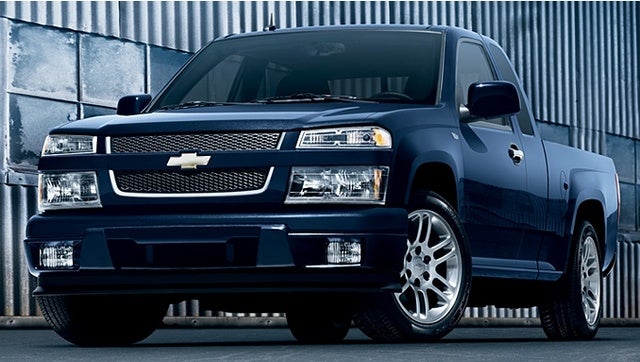 With its optional V8 engine, the 2010 Chevrolet Colorado has plenty of power for towing or carrying heavy loads, and its price is very competitive, since it includes a lot of value-added features.

The 2010 Colorado's small base engines are inadequate for real work, the design is showing its age, and it has poor resale value, especially compared to its foreign competition.

The 2010 Chevrolet Colorado’s combination of value and capability makes it a great buy for anyone who wants a real truck and can live with its occasionally uncivilized demeanor. A wide variety of trims and available low-range 4WD mean there is a Colorado for nearly every need. Base four-cylinder trims are well-suited to local errand-hopping, while larger cabs and available V8 power can upgrade this compact truck to near full-size capability.

Available in three cab configurations - Regular, Extended (with vestigial rear seats), and Crew (four doors and a real back seat) - the 2010 Colorado rides on a traditional body-on-frame chassis. Regular and Extended cabs get a useful, 6-foot bed, while the Crew cab trades interior space for a truncated 5-foot box. Rear-wheel drive (RWD) is standard, with electronic four-wheel drive optional, along with a limited-slip rear differential.

The base trim level is the W/T, or Work Truck, powered by a 2.9-liter inline four-cylinder. Despite its name it does offer a few frills, notably a leather-wrapped steering wheel, air-conditioning, and cruise control. The step-up LT1 trim level offers standard alloy wheels, body-color trim, and a CD stereo with XM satellite radio. Further up the ladder is the LT2, featuring the larger, 3.7-liter inline-five engine and a four-speed automatic transmission standard. Power accessories are also included, along with 17-inch chrome wheels. The top-dog LT3 trim is available only with RWD and comes standard with a powerful, 5.3-liter V8 engine. Special 18-inch rims are finished in Midnight Silver, while the interior is dressed up with standard cloth bucket seats. 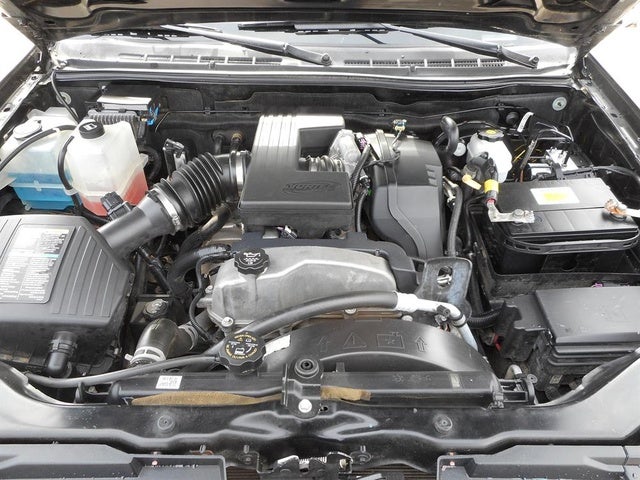 Three engines are offered in the Colorado. W/T and LT1 trims receive a 2.9-liter inline four-cylinder that makes 185 hp and 190 lb-ft of torque. Despite being the smallest variant of the so-called Atlas architecture, it is large and powerful for a four-cylinder, while still offering excellent fuel economy. Optional in base trims and standard in the LT2 is a larger, five-cylinder version of this engine. Displacing 3.7 liters and making a robust 242 hp, the five-cylinder is an unusual yet efficient alternative to the ubiquitous V6 configuration. The downside is reduced refinement; indeed both inline engines subject drivers to a rather choppy idle and less-than-velvety power delivery.

The top motor, an option for the LT2 and included in the LT3, is the 5.3-liter Vortec V8, borrowed from the larger Silverado truck. Pumping out 300 hp and 320 lb-ft of torque, the V8 greatly enhances the Colorado’s ability to tow and haul.

The small 2.9-liter engine comes standard with a five-speed manual transmission, an economical choice. Optional on the four-cylinder and standard on both larger motors is a four-speed automatic. This transmission is short a gear or two versus the competition, but at least shifts smartly in the GM tradition.

The available 4WD system is electronically engaged and offers a low range for rough going. The optional Z71 package further upgrades the 4WD system with skid plates for the chassis and a locking rear differential. Towing capacity maxes out at 6,000 pounds with the V8, plenty stout for a truck of this size.

As the "compact" pickup class collectively edges toward midsize, the Colorado still cuts a trim figure that makes it easy to handle around town. RWD models feature a fairly modern coil-spring front and leaf-spring rear suspension that provides competent, if unexciting, handling. 4WD trims get a relatively agricultural torsion bar setup up front, which imparts a truck-like jounce to large suspension movements.

The Z71 package may improve off-road handling, but the firmer shock absorbers further degrade the ride, especially on 4WD models. Overall, ride comfort is not a strong point for the Colorado, and those who prefer a plush feel should look elsewhere. The upside is a 1,500-plus-pound payload capacity and a confident feeling in rough terrain.

While not quite the dungeon that some reviews make it out to be, the Colorado’s interior lacks pizazz. The dash is rendered in hard plastic, and the design is uninspired. The seats lack support and are covered in rather frumpy vinyl or cloth, though leather is optional. Yet ergonomics are good, controls fall easily to hand, and dials are well marked. While not up-market, the design at least betters its main domestic rival, the Ranger.

Chevrolet has done a competent job of silencing road and wind noise, though the brash engines and firm suspension still transmit too much feedback into the cabin. Space inside the cabin is generous for front occupants, with plenty of leg and elbow room and a nice driving position. It’s a different story in back, with the Extended cab offering a typically useless partial seat and even the Crew cab lacking stretch-out space for adults.

Standard and optional features cover the bases, but don’t stretch into the outfield. While power options, leather heated seats, and a CD stereo with XM are all available, many new and desirable features offered by the competition (navigation, a back-up camera) are not available in the Colorado. At least the short options list helps keep the price down while still giving buyers everything they need to get the job done.

The addition of standard side-impact curtain airbags enhances the Colorado's safety package, though ironically the 2010 model didn’t fare as well in government side-impact crash tests as the 2009 model did. Crew cabs performed the best, with a five-star frontal crash rating; all other trims received four stars.

Antilock brakes are standard on all four wheels, with traction and stability control providing assistance in slippery conditions. The inclusion of GM’s excellent OnStar safety system, able to summon help in the event of a crash, should provide a measure of reassurance.

Owners of the Chevrolet Colorado are very satisfied with their truck’s capabilities and solid construction. Fuel economy is a strong point, with some owners reporting up to 24 mpg in conservative driving. Complaints mainly center on the uninspired interior design and cheap materials, while other demerits concerned its rough ride, especially with the Z71 package.

What's your take on the 2010 Chevrolet Colorado?

migration_sldl2004 I love my 2010 Colorado. I have the LT1 4x4 extended cab, but it's pretty much loaded with the leather seating and optional 5.3L V8. Car gurus' review is probably the most honest that I've seen, since at least they admit that most owners are satisfied with their Colorado trucks. I don't have the Z71 suspension, so I think the ride is perfectly fine. The truck has a sub-7 second 0-60 time with the optional V8 and I can tell you that the V8 is a rocket in this truck. Great performance and a great truck--I would recommend it to anyone.

migration_sldl2004 5 months and 8,000 miles later, I'm still loving my '10 Colorado. I've since pulled my snowmobiles, ATV's and a fully loaded 6'x12' U-Haul cargo trailer (largest pull-behind trailer they have) and the truck has performed like a champ. We've taken it on vacation through the Adirondack mountains and I averaged 18.5 mpg, which is not bad given that it's a V8. It has 53,000 miles on it now and I'm anxious to see how it performs this winter in snow. I had the transmission fluid/filter changed at 50,000 miles, per GM's maintenance schedule. The heated leather seats are great on cold fall mornings here in Northern NY. So far, so good with my truck! I'll do another review in the spring.

migration_sldl2004 16 months and 20,000 miles later, my Colorado is still running like the day I bought it. Only issue was a broken wire in both ext cab rear doors, which caused the air bag light to come on. It was a simple inexpensive fix with no problems since. Not sure how this truck got such negative reviews from everyone, but so far so good for me. Drives nice, lots of power from the 5.3 V8, it's very good in snow with the 4wd and I get a lot of compliments on it.

Have you driven a 2010 Chevrolet Colorado?
Rank This Car

I'm looking at a 2010 colorado and car gurus shows 2 accidents. Carfax shows no accidents but damage reported. Why and how can I find out the extent of the damage?

I'm considering buying a used colorado.I was just curious what kind of gas mileage I should expect with a 4x4 crew cab with the straight five cylinder engine,and if there's much difference from the...

My Speedometer On My 2010 Chevrolet Colorado Lt Pu Sticks

i can reset it by disconnecting the battery. is there a seperate sensor on the speedometer itself or is it the wheel sensor