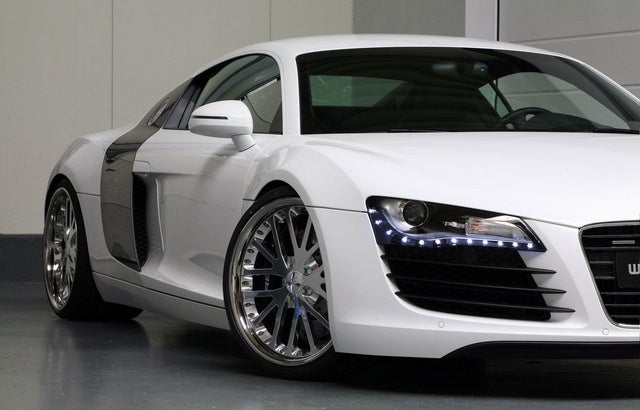 If you aim to become the world’s top-selling luxury vehicle manufacturer by 2015, one thing is violently clear - eight cylinders aren’t enough. Or so it seems. Hot on the heels of the release of their Gallardo-inspired supercar, the R8, Audi decided to blur the distinction between the two cars even further, dumping the 5.2-liter V10 from the Gallardo into the R8. This is the same engine Audi put in its S6 and S8, adapted for midengine application. With relatively few modifications, confined to intake and exhaust specifications and mapping, the 5.2 will be slightly more sedate here than when powering a Lamborghini. Output here is 525 hp at 8,000 rpm and 391 lb-ft of torque at 6,500 rpm, an increase of more than 100 hp from the V8 R8, but still detuned 35 hp from the Gallardo application. Regardless, this will shave more than a half-second off the 0-60 sprint, pushing the V10 R8 to that mark in less than 4 seconds. All this, and you still get an average fuel economy of 17.2 mpg, according to Audi at least.

Buyers have a choice of two transmissions, a six-speed manual or the R Tronic six-speed sequential manual transmission, the latter coming with steering-wheel shift paddles. Configured with Audi’s Quattro AWD, the new R8 has several upgrades over the older V8 version, including new magneto-rheological dampers at all four corners and the carbon/ceramic brakes from the Gallardo, which result in a weight savings of almost 20 pounds. Other notable changes include LED headlamps with 54 bulbs per side doing high and low beam, turn signal, and daytime running light duty, a chrome grille, more pronounced side blades and sills, a matte aluminum finish for the side window grilles and dual oval single-pipe exhausts. The interior is rumored to be slightly modified from last year as well, although Audi has not confirmed this yet.

What Is The Top Speed Of Audi R8