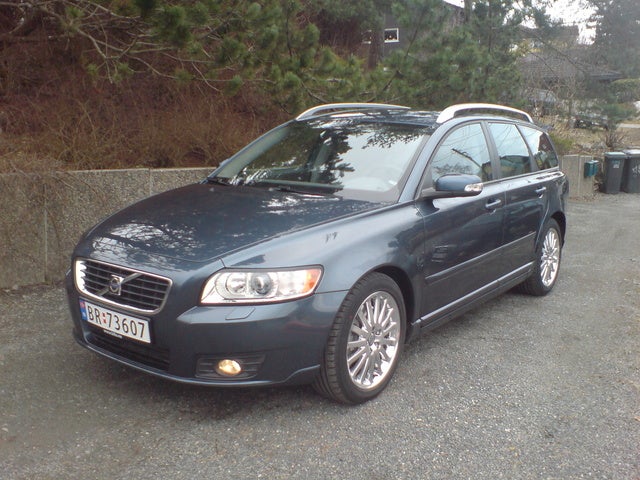 Volvo claims 50% of V50 owners are under the age of 35, a surprising statistic that proves the Swedish automaker is succeeding in its goal to capture a younger market. Volvo's lines have become more sporty, its engines have a little more pep, and the company is slowly but surely becoming more “hip.” The 2009 V50 is a carryover from 2008 and sees no major changes, and it comes in two trims – the 2.4i and the T5 AWD R-Design.

Under the hood of the 2.4i sits a 2.4-liter, inline five-cylinder engine, capable of 168 hp, that is reasonably efficient at 20/28 mpg city/highway. Those horses power a five-speed, front-wheel-drive automatic transmission with geartronic shifting. The T5 AWD R-Design not only adds all-wheel drive, but a turbocharger to ramp up the hp significantly to 227. The T5 rides a 2.5-liter, inline five cylinder and loses a little mileage in the process at 18/26 mpg. Both trims perform reasonably well on the track for both cornering and acceleration, but as with most station wagons, safety and accessories are usually the deciding factors.

Being closely related to the S40, the V50 shares its interior accessories and options. The center console can be ordered in two new colors, Nordic Light Oak and Virtual White (which has earned the moniker “iPod white”). The 2.4i is fairly stripped down unless you want to order options packages, and the only way to get the navigation system is to upgrade to the T5 trim. After being slow off the line with Bluetooth, that feature is now standard on both trims, and the stereo system brings great midrange clarity to your CDs or MP3s. For audiophiles, the optional Premium Surround System with Dolby Pro Logic II decoding has received nothing but gleeful reviews.

Not that Volvo ignores safety with any of their vehicles, but the issue becomes paramount when dealing with station wagons and other vehicles used for transporting the family. The V50 is no exception. Standard are four-wheel antilock brakes, dual front, side impact, and side curtain airbags, electronic stability control with traction control, and tire pressure monitors. When the brakes are slammed down, the brake lights will flash brightly to warn the cars behind you, and if your airbags happen to deploy, your hazard lights will automatically turn on. The V50 is built on the same frame as the S40 and is designed to dampen front- and rear-end collisions while maintaining rigid protection from the sides.

Hello! I recently bought a 2009 Volvo V50 that's in really great condition but the head gasket just blew. Is it worth repairing or is this just the beginning of a long line of engine problems?