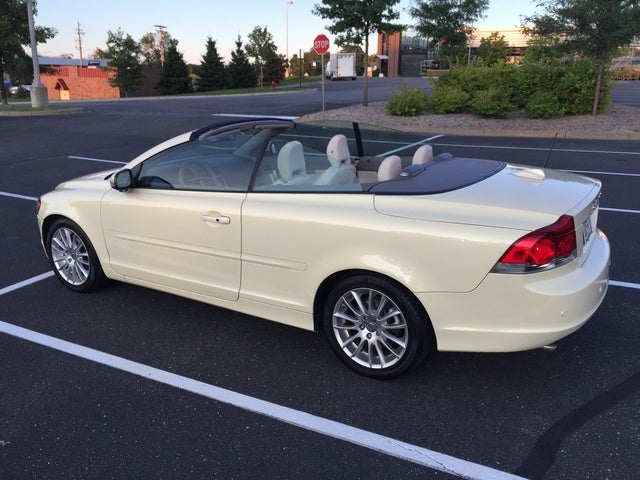 Distinctiveness, award-winning safety attributes, an easy-to-operate convertible top, and a lush, feature-laden cabin make for an enjoyable drive in the 2009 Volvo C70.

The ’09 C70’s hefty base price and costly parts and service, as well as lackluster fuel economy numbers, may deter some buyers.

The 2009 Volvo C70 combines distinctive styling, entertaining handling characteristics, the security of a hardtop, and the freedom of a convertible, along with impeccable safety credentials. Though not quite as performance-oriented and somewhat costlier than the BMW 3-Series, the ’09 C70 hardtop convertible is a capable and comfortable automobile that is quite at home in the city and on the highway.

Not ordinarily known for spiffy automobiles, Volvo has strayed a bit from its staid demeanor with the 2009 Volvo C70, a stylish and distinctive hardtop convertible. Yet the ’09 C70 maintains Volvo’s reputation with its outstanding safety ratings and distinctive, if not flair-driven, styling. The ’09 C70 shares the same platform as its cousins, the S40, V50, and the C30, and presents a convertible in coupe’s clothing – or vice versa.

Volvo’s C70 was first introduced in 1998, with both convertible and coupe trims. The coupe was dropped several years ago, and the ’09 C70 is available in only one trim, at least in North America - the convertible T5.

Though most reviewers concede that the C70 is not quite up to its main competition, the BMW 3-Series, decent road manners, an engine that has been described most often as “adequate,” notable safety features, and an interior that draws raves from reviewers and owners alike, the 2009 Volvo C70 is still a presence in its class.

The 2009 Volvo C70 front-wheel-drive convertible packs a standard 2.5-liter DOHC turbocharged inline-five (I5) powerplant that delivers 227 hp at 5,000 rpm and 236 lb-ft of torque at 1,500 rpm. This is the sole engine offered with the C70, and it's combined with a standard six-speed manual transmission with overdrive. A five-speed, auto-manual Geartronic automatic transmission is available as an option for the C70.

Mileage for the ’09 C70 is estimated at 18/27 mpg with the manual six-speed, and 18/26 with the optional automatic transmission. Volvo recommends using premium gas in the 2.5-liter I5.

Professional reviewers find the ’09 C70 to have reasonable power once under way, but acceleration off the line could be better, leading to a somewhat less-than-impressive ability when passing and merging on the highway.

The 2009 C70 rides in a four-wheel independent suspension, with MacPherson front struts, and a multilink rear suspension. The C70 rolls on standard 17-inch wheels, with optional 18-inch wheels as an option. Four-wheel, ventilated, fade-resistant disc brakes bring the C70 to a stop with little to no brake fade and a solid feel to the pedal.

Though not quite up to the BMW 3-Series, with a ride some reviewers find “stiff” and “harsh,” many other professional reviewers find the handling, ride quality, and quietness of the ’09 Volvo C70 impressive. Several reviewers note that the C70 is, strangely enough, a blast to drive. This is a car built for miles of cruising in relative ease and comfort, yet with a sporty and entertaining feel to it.

Owners and reviewers are in total agreement that the 2009 Volvo C70 has one of the top interiors in its class. Well-designed, and with quality materials throughout, this is where the C70 truly stands above the rest.

Always a leader in automotive safety, Volvo continues this tradition with the 2009 C70. Standard safety features abound in this solid convertible, including a dual front side-mounted airbag system.

Crash test data from the National Highway Transportation Safety Administration (NHTSA) is unavailable for the ’09 C70, but the Insurance Institute for Highway Safety (IIHS) gives the C70 its best rating of Good in all categories of testing. In addition, the IIHS rates the ’09 C70 as a Top Safety Pick for 2009 in front, side, and rear impact crash tests. The C70’s outstanding standard electronic stability control is also noted in the IIHS safety report.

Echoing most professional reviewers' opinions, owners of the 2009 Volvo C70 find its overall performance adequate, but not as good as some of its competition's. Lagging acceleration, an iffy ride, a hefty pricetag for both invoice and parts replacement, and issues with the touch-screen navigation system are among the more common complaints owners mention.

Virtually all owners also agree, however, that the ’09 C70 is a well-designed, well-constructed, aesthetically distinctive – inside and out – and, above all, safe automobile. Comfort, quietness, lush cabin appointments featuring quality materials and workmanship, at least bearable fuel-economy, new, one-button ease of raising and lowering the hardtop roof, and a highly regarded sound system also have owners praising the C70. Despite lower sales in 2008, owners of the 2009 Volvo C70 are well-satisfied with this elegant automobile.

Reyn I prefer the Lexus IS 350c. It would last much longer than GM Volvo.

Hello I applied for financing through CAPITOLONE. I received an email stating I can start shopping but I needed to contact CarGurus for more information on car shopping Can you help? iralee24@gma...

FM & Sirius modes are ok dealer wants $1100 to fix. An after market radio was suggested but would lose bluetooth