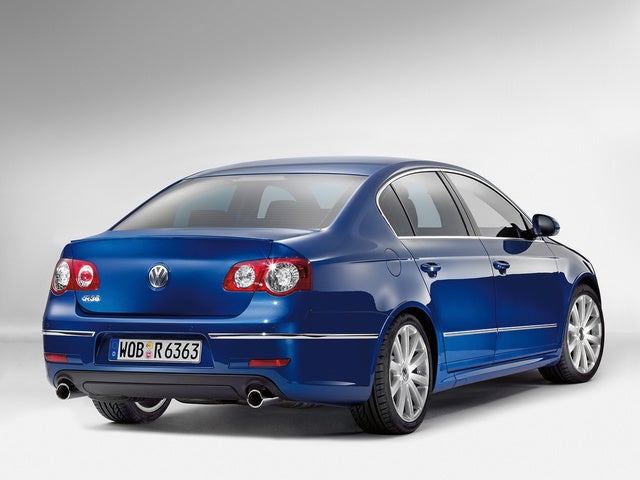 A solid and stable ride combines with tight, sporty handling and a peppy turbocharged engine in the 2009 Volkswagen Passat.

Its high pricetag puts the '09 Passat into the luxury midsize sedan market without the benefit of a more powerful engine or some key high-end features.

As one of only two midsize sedans that offers a wagon counterpart, the solidly built 2009 Passat offers both comfort and versatility. Although pricer than most of its U.S. and Japanese competitors, and lagging behind in power and fuel efficiency, the Passat does offer a more upscale cabin and features that rival those of luxury sedans. For those willing to pay a bit of a premium, the 2009 Passat also comes with a reputation for German quality engineering and European-style driving dynamics.

For 2009 the Passat pares its trims and engine options, offering only the Komfort trim in both sedan and wagon form. The front-wheel-drive premium midsize Passat also ditches its V6 engine, all-wheel-drive option, and manual transmission. Instead, it adds on a few more expensive options, such as a rearview camera and a new hard drive-based navigation system. New paddle shifters and three new steering wheel designs are also available, but abandoned options include leather upholstery, xenon headlamps, and upgraded audio systems.

Coming from Germany, the 2009 Passat offers sprightly European handling and high-end comfort, and offering the versatility of either a sedan or wagon allows it to stand out in the midsize field. The only other car in this class to offer a wagon is the Subaru Outback, which serves as the more rugged cousin to the Passat's refined and upscale personality.

Though somewhat bland on the outside, the 2009 Passat can be outfitted with an optional body kit for those wanting a bit more pizazz. This includes side sills, ground effects, sportier wheels, and a rear spoiler. However, most people considering a Passat for their commute or their family needs will be less focused on the styling and more interested in its good safety record, the wagon's cargo versatility, and its sporty yet solid driving dynamics. 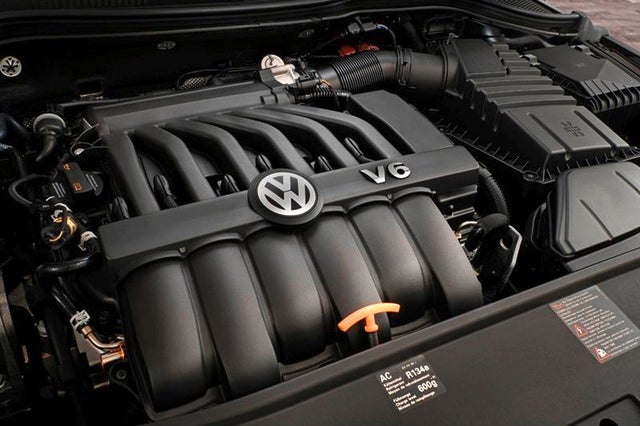 A 16-valve turbocharged 2.0-liter DOHC inline-four engine powers the 2009 Passat, paired only with a 6-speed Tiptronic automatic transmission. The manual transmission has been dropped this year, along with the powerful V6 engine option. The powertrain puts out 200 hp and 207 lb-ft of torque spread across a wide range of 1,800-5,000 RPM. Reported 0-60 times clock in around 7.4-7.7 seconds, and fuel economy averages a decent 19/29 mpg. European versions deliver 20 more horsepower and a shorter gear ratio, reducing 0-60 times to under 6 seconds – keep in mind, the Passat shares a birthplace with the Autobahn.

The turbo kicks up an energetic punch, with good off-the-line acceleration and passing power, as well as a satisfying turbo growl. Appealing to most Passat owners, the sedan and wagon do all this while maintaining highly praised fuel efficiency, which doesn't stand out in the class but feels adequate to most midsize sedan buyers. One downside: It needs premium gas.

As you would expect from a German automobile, the 2009 Passat behaves sensibly on the road, combining a sporty powertrain with tight handling and a stable ride. Sharing a platform with the Golf (or Rabbit in the U.S.), the Passat rides on a firm yet forgiving independent Macpherson strut front and multilink rear suspension. This results in a confident feeling of solidity on the road with minimal translation of bumps and impacts into the cabin. Even at high speeds, the Passat remains stable and stuck to the road, with very limited body lean or wind wander, a testament to its Autobahn-oriented design.

Critics find the steering nicely weighted and precise, delivering sufficient feedback to the driver without coming across as too vague. Braking remains generally strong and secure, although one test driver needed to push on the pedal a long distance for an adequate response. Both reviewers and owners mention the tight cornering and turning radius (around 36 feet) of the Passat, which also exhibits sport-like road grip on curves from its 17-inch wheels.

Test drivers come back with mixed reviews on cabin noise. Some find the Passat quiet and refined, while others notice road and wind noise. The turbo can also be noisy when kicking in, but whether that represents a high or low point is up to the driver's taste.

Abundant interior storage and driver-focused comfort characterize the cabin of the '09 Passat. Adult-size legroom can be found in the front and back, with 41.4 and a nice 37.7 inches respectively. Headroom comes in somewhat compromised at less than 40 inches throughout the cabin, and some critics think anyone over 6 feet tall may find the ceiling a bit low in the back seat. Owners on the tall side find the seat comfort and room up front perfectly adequate. Wide doors offer accessible entry and exit to the back seat.

Drivers get tilt and telescopic steering along with an 8-way power-adjustable seat, although a few critics find the shape of the seats causes discomfort on longer trips. The leatherette upholstery, heated front seats, leather trim for the wheel and shifter, and chrome accents on the gauges add a touch of upscale comfort similar to more luxurious sedans. However, critics mention the disappointing use of mid-grade plastics and materials (to keep the price below that of luxury sedans), which results in some rattling in the dash and headliner. Other reviewers malign the awkward angle of the tachometer and speedometer, which makes them hard to read, while the touchscreen navigation system gets blown out in direct sunlight. Some find the climate controls sit too low for easy access by the driver.

Rear seats split-fold 60/40 and feature an armrest that doubles as a trunk pass-through. Trunk size in the sedan measures 14.2 cubic feet, while the more utilitarian wagon offers anywhere from 35.8 to 72.6 cubic feet. Tiedowns and a convenient cargo organizer come standard, as does a roof rack. The storage-friendly '09 Passat also offers plenty of fun cabin compartments, including drawers on the dash, liter-size bottle holders, and a cooled glovebox. A slot in the driver's door is built to hold umbrellas and comes with its own drain.

Owners find the Komfort trim pleasingly upscale, with a great list of standard offerings. These include a 6-CD changer with MP3 jack and satellite radio, heated leatherette seats, a trip computer, remote entry, and a compass and temperature display. The customer-favorite power sunroof opens up the cabin nicely. The only significant interior option is a navigation system with a 20GB hard drive to store music. Other options focus on the exterior style. In general, the extras can significantly jack up the price of the 2009 Passat, catapulting it into the luxury sedan range.

The '09 Passat does well in crash tests, thanks to a long list of standard safety equipment. Earning four stars in frontal impacts and four and five in side impacts, the Passat comes with 4-wheel disc and ABS brakes, supplemented by electronic brakeforce distribution. Dual front-side and side curtain airbags for the front row are standard, with the option to add rear side curtain bags. Active front head restraints, and traction and stability control are also standard, along with mirrors with turn signals, a tire monitor, automatic headlights, and foglights.

Useful options include a rearview camera and adaptive cruise control, which automatically maintains a safe distance between the Passat and cars in front of it. Parking assist helps when backing up, Hill Assist minimizes wear and tear on brakes, and Lane Assist kicks in at 40 mph. When the car begins to drift into another lane without a turn signal, the system gently steers the car back on course.

Aside from the costly need for premium gas, owners find few faults with their 2009 Passat. Overwhelming praise goes to its fuel economy, with some owners claiming their numbers exceed the sticker estimate. Fun driving dynamics come with the crisp handling, tight turning ratio, and expert cornering. Owners also appreciate the interior space and the high-end feel of the cabin, for a price less than most luxury midsize sedans. The sound system earns consistent high marks.

CarGurus drivers have yet to comment on the 2009 Passat. The relatively similar 2008 version, however, earns more positive than negative reviews. On the downside, owners mention the bland exterior appearance and a desire for a little more engine power. On the plus side, the Passat exhibits sporty handling with good road grip and what one driver calls effortless driving. The interior is roomy, comfortable, and feels as luxurious as more expensive cars. Drivers also like its strong safety record and decent fuel economy.

What's your take on the 2009 Volkswagen Passat?

Have you driven a 2009 Volkswagen Passat?
Rank This Car

How Do I Make My Listing Pop On Top

I would like to have my listing displayed at top page. How do i do it?

How To Check Spark Plugs And Coils

Motor cranks over but will not start

Why Wont It Start If It Has Fuel Pressure But Still Fires With Starting Flu...

I swapped out this motor in this 08 passat. Swap went well and then I go to start it and I cranks great but no start! Itll almost start with some starting fluid. If checked fuel pressure and it has...

I have a 2009 VW Passat 2.0 L Turbo. What would cause a gasoline motor to sound like a diesel when idling?