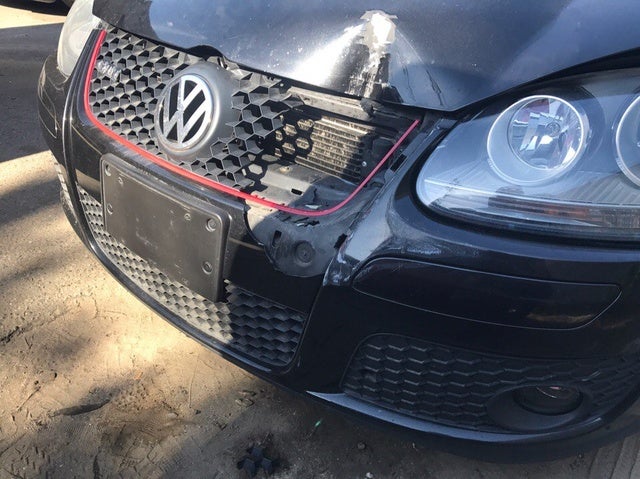 The 2009 Volkswagen GTI seamlessly blends performance car attributes with family-friendly utility by offering a powerful turbo engine, versatile hatchback utility, and a refined interior that feels roomy for a compact.

In a growing sport compact field, the '09 GTI no longer leads the pack in terms of road-ripping acceleration, and its options can jack up the already high pricetag.

Nimble and quick, the 2009 GTI also offers high-end features and a classy cabin, adding up to a high-end performance car. Oh yeah, and it's a compact hatch, which means it also offers good city maneuverability and functional cargo space.

An affordable compact sports hatchback, the 2009 Volkswagen GTI adds heated front seats and heated washer fluid to its standard features this year. The options list gets a new Thunderbunny Package (we are not making that up), which adds exterior styling points such as a front spoiler and flashier trim and exhaust tips. Also new for 2009, the 2.0 turbo engine now earns a PZEV rating for cars sold in California.

A sport-tuned Rabbit (which itself is a rebadged Golf), the '09 GTI offers both two- and four-door versions of its front-wheel drive hatchback, both of which carry the same dimensions, the same set of equipment, and the same powertrain. Those with small families or lots of friends may want to opt for the four-door's easier backseat entry and exit. An extensive list of standard features, such as a 6-CD changer, heated mirrors, and wheel-mounted cruise and audio controls gives the GTI a more high-end feel than most of its competitors, and the high-quality materials used for the cabin make it a class leader in comfort and refinement.

The 2009 GTI works well as both an agile city car, able to navigate tight corners and small parking spots with ease, and as a confident, yet fun highway cruiser, backed by a strong turbo engine and solid German engineering. Though marketed as a performance hatchback for those on a budget, potential buyers should be aware that the price of the 2009 GTI quickly soars with the addition of numerous options, such as a sunroof, navigation system, leather upholstery, and power front seats. 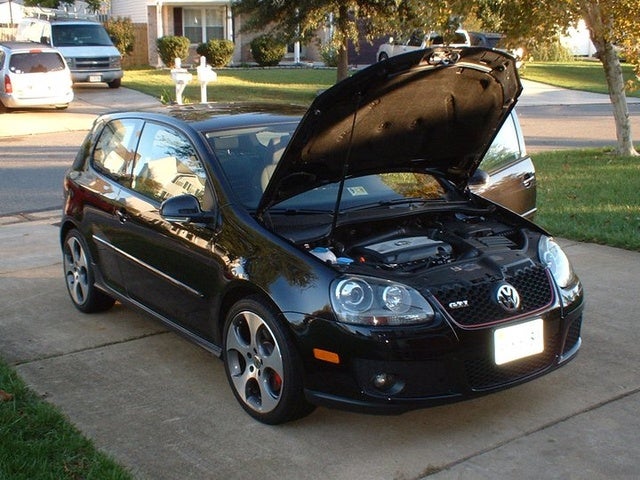 A direct-injection turbocharged 2.0-liter inline four delivers 200 hp, but, more important, puts out 207 lb-ft of torque at a low 1,800 RPM. A standard 6-speed manual can be replaced by the optional 6-speed DSG automatic. This sequential shift transmission mimics a manual, but without the clutch. It can be operated in automatic mode or manual mode via paddle shifters on the steering wheel. Critics and owners agree the DSG shifts smoothly and quickly, and the gear transitions in automatic mode are nearly imperceptible.

Equipped with the DSG, the GTI achieves rocket-like acceleration, with 0-60 times just under 7 seconds. While not necessarily speedier than other sport compacts on the road, such as the MAZDA3, the GTI offers great power across a broad RPM range and adds a lot of fun to the everyday commute. Fuel economy remains average, but most drivers seem pleased with its 21/31 mpg (22/29 with the DSG). New for 2009, models sold in California earn a PZEV (partial zero emissions) rating.

Built for the Autobahn, the 2009 GTI exhibits crisp handling, precise steering, and tight cornering capabilities. Riding on a sport-tuned version of the fully independent Macpherson strut front and multilink rear suspension of the slightly slower Rabbit, the GTI feels solid and composed at high speeds, but without the harshness felt in many sport suspensions. This means a smooth and quiet ride for passengers, minus any float or isolation in the driving dynamics.

Behind the flat-bottomed wheel of the GTI, drivers maintain a good connection with the road. The electronic power steering adjusts its weight according to speed, with a lighter and more vague feel during low-speed city driving, but a nice weight during highway and back road cruising. The standard 17-inch wheels perform well, with good road grip, while the 18-inch alloys contribute to a harsher and noisier ride.

Along with the stiffer suspension, the GTI adds sport seats and stronger brakes, which test drivers find responsive. The hatchback's heavy weight makes it prone to slightly more body roll than lighter, more tossable sport compacts, but the lean is minimal and does not interfere with the generally taut maneuverability. Turbo power gets released instantly, and both the DSG and manual transmissions work well with the engine, although the long throws of the manual disappoint one test driver. Though not a true sports car, the GTI offers enough excitement for the everyday driver and modest performance enthusiast looking to punch up their commute.

Volkswagen knows how to build a high-end interior, and the 2009 GTI's feels refined and elegant compared to most compacts. Designed with convenience and comfort in mind, both the two- and four-door versions have the same dimensions. Although headroom can feel a bit tight for 6-footers, particularly when equipped with the optional sunroof, legroom measures 41 inches up front and a respectable 35 in the back. Good seat bolstering up front provides the perfect amount of grip when taking turns at high speeds, and optional power lumbar adjustments enhance comfort further.

Critics find the dash layout simple, subtle, and conservative. Gauges are large and legible, and the standard wheel-mounted paddle shifters and audio controls let drivers keep their eyes on the road. All trims feature standard tilt and telescopic steering. The cloth seats, though of questionable color and pattern, and the soft-touch materials and alloy trim convey an upscale feel, and the optional leather upholstery kicks up the luxury attitude a notch.

Rear seats come with a fold-down armrest and trunk pass-through and also split-fold 60/40, but do not fold flat. The cargo area holds 15 cubic feet with the seats up, a space that rivals that of some midsize sedans. With the seats down, cargo utility expands to 46 cubic feet. Tiedowns and grocery hooks are also standard. Interior storage ranks average, with useful front and rear cupholders, a large glovebox, and small door pockets.

Both two- and four-door GTIs offer a long list of standard features, which many owners find unbelievable for its price and size. Along with full power accessories, you'll find heated mirrors, cruise control, remote entry, wheel-mounted audio controls, and a 10-speaker sound system to listen to the 6-CD changer with MP3 jack and satellite radio. If that's not enough for you, an Autobahn Package adds heated leather seats, power front seats, an upgraded audio system, and a sunroof. Standalones include the sunroof, a navigation system (bundled with the Autobahn Package), and an iPod adapter, which several owners had trouble getting to work.

The 2009 Volkswagen GTI boasts an impressive safety record, earning four stars in frontal impacts and five stars for side impacts. All trims come standard with traction and stability control, 17-inch wheels with performance tires, and 4-wheel ABS brakes with brake assist and electronic brakeforce distribution. Dual front and side curtain airbags feature passenger deactivation sensors, and rear side curtain airbags are available as an option, but only on four-door models.

In the lighting category, the GTI features foglights and xenon HID self-leveling headlamps that automatically adjust the light around curves. A tire monitor and mirrors with turn signals are also standard.

Pleased with their little pocket rocket, owners of the '09 GTI rave about the acceleration power of its turbo engine, but overwhelmingly praise the DSG transmission. Drivers find it smooth and easy to use, good on gas, and able to deliver power across a broad range. The result is a fun and exciting drive around town and the chance to let loose on straightaways. Owners like the combination of performance car and utilitarian hatchback, listing the roomy interior and comfortable seats as high marks. Handling also receives good reviews from drivers who like the tight and sporty dynamics. Very few negative opinions exist of the 2009 GTI, but most mention the costly pricetag, options, and parts. Many drivers suggest adding Bluetooth as a feature.

The 2009 GTI has not received reviews from CarGurus owners, but the almost identical 2008 model also scores well on handling, effortless acceleration, a fun ride, and supportive and comfortable seats. The DSG gets singled out for its seamless and precise shifting, with many drivers preferring it to the manual. What impresses a lot of CarGurus owners is the ability of the GTI to fill the dual role of an everyday commuter and a performance car.

What's your take on the 2009 Volkswagen Golf GTI?

Roxann Am considering buying one for $7,000, and after reading up on it, I am excited to go forward. Loving your extended review and customers input, you have helped me immensely. Thanks Ann!!

Users ranked 2009 Volkswagen Golf GTI against other cars which they drove/owned. Each ranking was based on 9 categories. Here is the summary of top rankings.

Have you driven a 2009 Volkswagen Golf GTI?
Rank This Car

I Need Help Finding The Leak

I have a coolant leak in my 2009 Volkswagen Gti but I can't find it. Any thoughts?

Is A Gearbox Rebuild The Same As A Reconditioned Gearbox?

What Was The First Year That The Volkswagen GTI Had A Dual-clutch Transmiss...

Will VW create a MKVI GTI with a diesel engine?

How many BHP does a GTI Mk5 have to the wheels?