The 2009 Matrix does well in federal government crash tests and offers a good number of active and passive safety features.

Aside from Toyota's usual mechanical dependability and non-catastrophic resale value, there is very little about the 2009 Matrix that’s inherently good, which has less to do with mechanical and design faults than with its maker offering not one but two competitors that are significantly better. 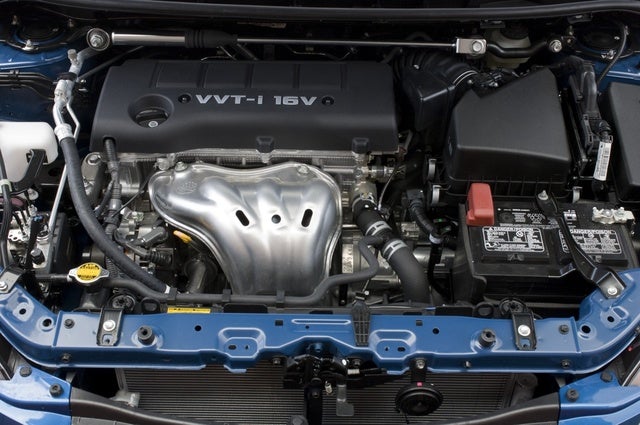 Street-chic looks with all the bells and whistles won’t make the 2009 Toyota Matrix anything more than what it is. Fun might be a word used to describe this ride, but that only goes as far as the wrapping. Take that off and you’ve just got a lot empty space, including where the engine sits.

Looking for SUV-size room wrapped in a compact package? The re-designed 2009 Toyota Matrix might fit the bill. With a touch more power, a hint of new styling and no change in size, this second-generation Matrix is basically a tall-body wagon version of Toyota's Corolla compact sedan. The five-door 2009 is presented in three trims: the Standard, the S, and the nifty XRS.

The car’s new look, or facelift, is getting professional reviewers talking, though their mixed metaphors don’t disguise their mixed feelings about this ordinary machine: “new sheetmetal swaps the ‘grandma’s high trousers’ look for gangsta chic,” or “the sequel to the Matrix. Let’s call it The Matrix: Rebloated.” The Matrix is spearheaded by a short sloping front-end and low-profile, pointed headlamps. Down below, the top-end XRS trim includes deep-set fog lamps as well as front and rear underbody spoilers. The Matrix's rising profile leads back to a well-sculpted rear end, featuring a rally-style roof spoiler.

Up front, the 2009 Matrix offers two engines, the 132-hp 1.8-liter that powers the Standard, and for the S and sporty XRS models, a bigger 158-hp 2.4-liter. All come with front-wheel drive; the S is also available with all-wheel drive, which comes only with an automatic transmission. The others can be had with a manual or automatic. AWD S and XRS models have an independent rear suspension. The 2009 Toyota Matrix is certainly a step up from its predecessor, but a giant leap it is not. 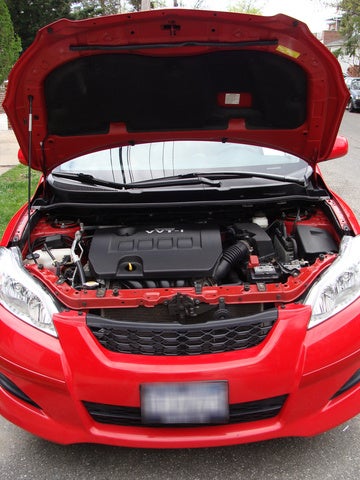 From standstill to sixty, the 2009 Matrix clocks a very average time of 7.9 seconds. The engine responsible for this is a 16-valve, 1.8-liter four-cylinder that holsters 132 hp at 6,000 rpm and 128 lb-ft of torque at 4,400 RPM. The engine features Dual VVT-i (Variable Valve Timing with intelligence) on both the intake and exhaust camshafts that helps it achieve outstanding performance and economy. Estimated EPA fuel economy ratings are 26/32 mpg with the five-speed manual transmission models and 25/31 with the four-speed automatic.

All Matrix engines take regular gas, a full tank of which can take you 422.2 miles - almost the length of Guatemala. Maximum towing capacity is a respectable 1,500 pounds. 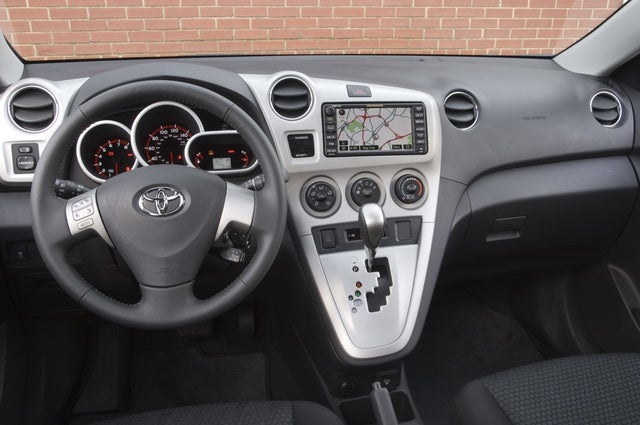 The 2009 would like to be a contender in its class, but the truth is it doesn’t come close. The biggest problem is under the hood: no go. Then comes the handling: no show.

The 2.4-liter engine is raspy while accelerating, though it relaxes at highway speeds, and the base engine revs smoothly, if not all that quietly. The S and XRS have adequate acceleration with the automatic transmission, even if liberal use of the throttle is required for merging and passing maneuvers. Manual-transmission versions are not noticeably livelier.

For the ride itself, the 2009 absorbs small pavement imperfections well. Over sharp bumps, the ride gets stiff even with its 16-inch wheels. The XRS's 18-inch wheels can trigger some jiggle over patchy pavement and freeway expansion breaks.

These tall wagons are more prone to crosswind wander at highway speeds than lower-built small cars. The Matrix’s steering and suspension are standard-issue Toyota, which is to say they’re solid and firm. Take a corner too quickly and you risk scraping the Matrix’s side skirt on the pavement, and there’s noticeable body lean in versions equipped with 16-inch tires, even with AWD.

Grip and balance are sharper in the XRS, which offers fine around-town maneuverability. Braking control and pedal feel are fine for the class. Wind rush and road noise rise markedly at highway speeds on all models.

The gauges are brightly lit, but indistinct markings on the speedometer sometimes require a second look away from the road. The center portion of the dashboard is canted toward the driver, but not enough to prevent outside light from washing out the radio display. Climate controls are large, accessible dials. 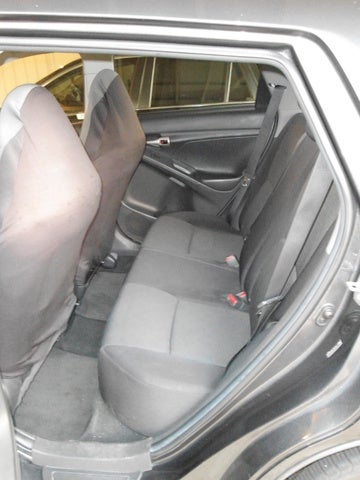 All Matrix models look built to a price, partly because of a notable lack of padded surfaces - even the front center armrest is uncushioned. Many panels have an attractive-enough molded-in grain, but the dashboard is dominated by smooth, silver-painted plastic and looks cheap. Few materials feel substantial, and the doors close with a tinny clang.

The uniquely configured gauge cluster serves as the focal point of the driver-centric cockpit design, but that dictates a wide center console that intrudes on driver knee space. Otherwise, the Matrix makes fine use of its tall design by furnishing generous headroom. The tilt and telescopic steering column offers audio controls to command the optional JBL stereo system, and the driver-seat height adjuster adds another comfort-enhancing standard feature, contrasting the tall doors and tapered roofline, which impart a slightly closed-in feel.

Visibility is poor to the rear corners. The Matrix offers enough legroom for two large adults, but knee clearance gets tight with front seatbacks reclined. Headroom is generous for 6-footers.

Seats are a bit too firm to be really comfortable. The doors could open wider and need broader thresholds, but the tall body minimizes stooping on entry and exit. The front passenger seat folds flat on all but the base model for cargo-carrying versatility, as does the split rear seat. 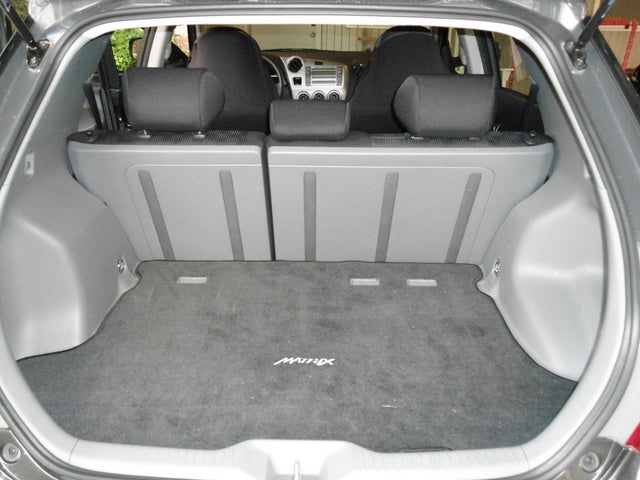 The 2009 gets top marks in government-rated crash tests and offers a good number of active and passive safety features. Standard safety features include antilock brakes (ABS) with Electronic Brake Distribution (EBD), dual-stage front airbags, front seat-mounted side airbags, two-row side curtain airbags, and active front headrests. Vehicle Stability Control (VSC) with TRAC (and an off switch) is standard on the XRS and optional on other models.

In National Highway Traffic Safety Administration (NHTSA) tests, the Matrix gets five stars in front impact crashes and another five out of five for the driver's protection in side impact crashes. The 2009 Matrix also earns four stars for rear passengers' protection in side crashes, and a four-star rollover rating. Safety is where this car really shines. 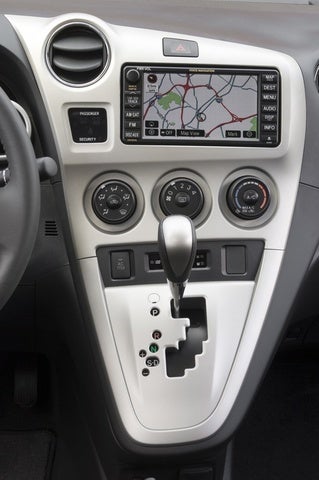 Hearty applause is the best way to describe 2009 Matrix owners' appreciation for their machine. And it's praised in almost every discipline, every feature. Gas mileage, roomy interior, and handling all shine, proving the car’s versatile design. It’s with the exterior that drivers really get excited. Many can’t wait to get in, turn on, and let it rip. Others want to load her up and head for the hills, and several more, especially owners of the Matrix S AWD with sport package spoilers, orange metallic paint, and 17-inch wheels, just want to turn heads.

On the downside, cargo space, numerous blind spots, and a lack of comfort in the ride are consistent sticking points. For the most part, Matrix owners see their car in stark contrast to how it's judged by professional reviewers.

Users ranked 2009 Toyota Matrix against other cars which they drove/owned. Each ranking was based on 9 categories. Here is the summary of top rankings.

Have you driven a 2009 Toyota Matrix?
Rank This Car

How Is This Possible?

I pulled the motor out changed the rod and main bearings. Put the motor back together and put it back in the car. Now it won't establish a link with the ecm and has no spark and the fuel pump won't...

My 2009 Matrix having a cylinder 4 misfire (obd2 code P0304). I replaced all the spark plugs, swapped all the coils, replaced all fuel injectors, checked the resistance and voltage on the all the i...

152 views with 3 answers (last answer about a year ago)

Would A Scion Tc Or Toyota Camry Exhaust Sytem Fit?

Why Is My Battery Light Coming On Intermittently?

Last week the tech at Advance Auto replaced my battery after saying the old 1 had a dead cell (no check battery light but headlights were flickering & car tried to stall). Today after a minute or...